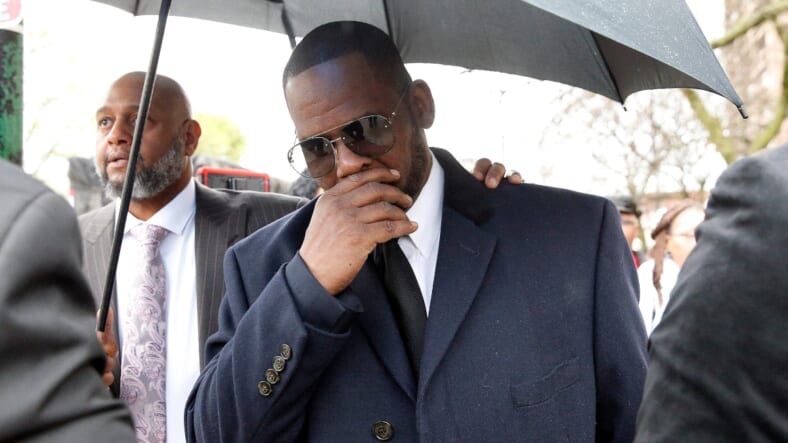 R. Kelly's time may finally be up. The singer has been charged with 11 new more serious charges of sexual misconduct. (GettyImages)

R. Kelly is petitioning to a federal judge to be moved from solitary confinement to placed in general population.

Legal representation for the troubled R&B superstar filed documentation with the courts in hopes of being transferred to the general area. The reasoning, according to the filing, states that solitary confinement is a location that is for the punishment of those who are convicted, not for those who are awaiting trial.

Kelly’s attorney Steven Greenberg states R. Kelly has no human interaction, does not see sunlight, cannot have access to the media or recreational activities and has all his face-to-face visits recorded. Beyond that, the self-proclaimed “Pied Piper of R&B” can only shower three days a week and only gets to use the phone once a month.

TMZ details that Greenberg has told the courts that his client is being punished because of his “celebrity status” and due to the nature of his alleged crimes and the alleged involvement of minors. He also argued the placement of Kelly in solitary is affecting him both mentally and physically.

If removed from confinement, there is still a risk that Kelly runs by being placed in the general population because of his fame and the crimes he is accused of. Currently he is being held at the Metropolitan Correctional Center in Downtown Chicago.

Prior to his request to be transitioned from solitary, R. Kelly’s attorney detailed the “Ignition” creator could not read fan mail he is receiving.

READ MORE: R. Kelly was a ‘no show’ at pretrial hearing in Chicago

“I’ve seen him get very emotional. He’s dealing with a lot of stories that have been made up. He’s not a fighter. I’ve seen him cry when he talks about the situation,” Greenberg told the Chicago Sun-Times. “He’s also a spiritual guy, has a Bible with him in his cell, but he can’t read it. It’s basically there for comfort. Now he’s been placed in the MCC’s ‘SHU’ — a cell in solitary confinement away from the jail population and is constantly being moved from cell to cell. He has only the guards to talk to.”