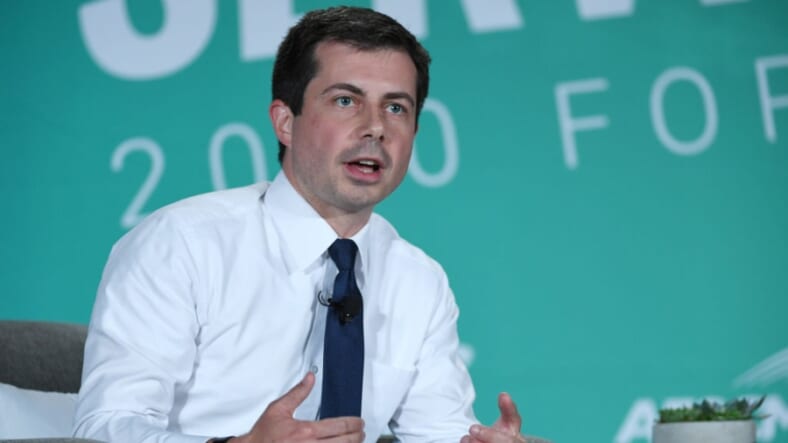 In a candid new interview with theGrio, 2020 Presidential hopeful Mayor Pete Buttigieg of South Bend, IN, says if America doesn’t address race issues, the future of the country is at stake.

“I’ve reached the conclusion that if we don’t tackle systemic racism in my lifetime, then it is going to bring down the entire American project,” Buttigieg told theGrio.

— Bill to make D.C. a state gets support of Democratic presidential candidates

Buttigieg was criticized for his handling of a fatal police shooting of a Black man, that left many members of the South Bend Black community deeply hurt and angered.  The mayor has since publicly acknowledged that he failed to properly handle the issue during a debate in June.

“There’s definitely a lot of pressure especially when you’re on a presidential debate stage to deny anything that’s ever gone wrong, defend everything,” Buttigieg told theGrio.

“We’ve really struggled especially in the post Ferguson years to attract more Black officers… I want people to know that when something is going poorly I have the ability to face that, own it, and work on how to make it better.”

Buttigieg, a military veteran who served in Afghanistan, and a former Obama campaign staffer, also talked about losing his “racial innocence” through conversations with Black friends who didn’t allow him to stay naive about racism.

“I don’t want to be the white guy telling you that I understand the Black experience because I have Black friends,” Buttigeg told theGrio, as he explained that his experiences as a gay American also taught him empathy.

“You know belonging to a group that has been hated and feared and denied opportunity in a very different way, has helped me understand…not what it’s like to be Black, but why we all need to stand up for each other when anybody is being excluded.”

Buttigieg named climate change disasters and Hurricane Katrina, as examples of how communities of color are left most vulnerable by institutionalized racism.

Territories colonized by the United States, such as Puerto Rico and the U.S. Virgin Islands, have also struggled to recover in the wake of hurricanes.

But Buttigieg said helping these areas is more about political representation than disaster preparation plans, and hinted that race is a factor in weak government response.

“I don’t think the response to Maria would have been so weak if Puerto Rico had presidential electoral votes,” Buttigieg told theGrio.

“This is also true for U.S. citizens. District of Columbia has no representation in the House or the Senate…I wonder whether it’s a coincidence that if D.C. were a state, it would be the most African-American state in the union?”

During the interview, Buttigieg also highlighted his new policy plan for Black America, called the Douglass Plan, which he announced at last week’s Democratic Debates in Houston, TX.

The plan includes “health equity zones” to address areas where Black Americans disproportionately suffer from health problems, and to promote anti-racism in the medical workforce.

Another feature includes creating a target of 3 million new jobs in minority communities within 10 years.

Buttigieg’s poll numbers within the Black community are low compared to his counterparts. His new African American outreach director, Angela M. Angel, told POLITICO “a lot of black voters don’t know Pete,” but she was confident that would change.

Watch the full video interview with Mayor Pete Buttigieg above where he shares additional details from his Douglass plan, a response to critics of his inexperience, and his personal message to LGBTQ youth of color. Stick with theGrio for more #WokeVote2020 coverage.

Natasha S. Alford is a digital host and Deputy Editor of theGrio. Follow her at @natashasalford on Instagram and Twitter under the hashtag #ThePeoplesJournalist to get the latest in news, politics and culture.