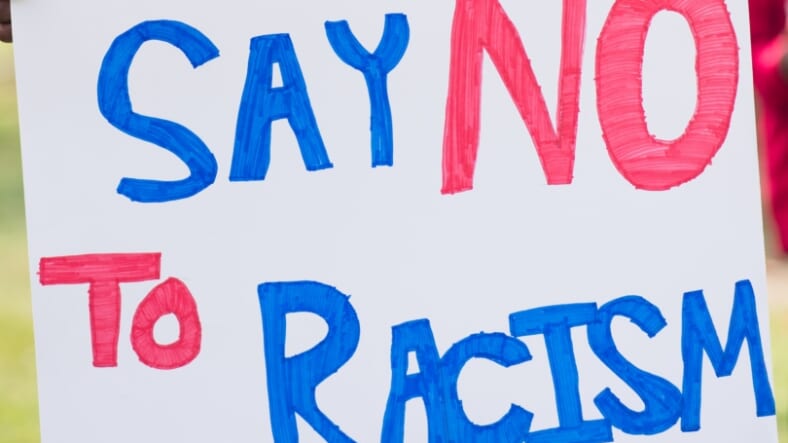 A Georgia Sheriff’s Office employee has been fired after he was caught on camera flaunting his racism in a nasty rant against a Latina college student in Savannah.

On Wednesday, Sheriff John T. Wilcher confirmed that the man who has not been named has been terminated after Cristina Riofrio, 19, posted a video of the man screaming “shut the f*** up!” while she was trying to get food at a McDonalds, NBC News reports.

Riofrio is from California and attends Savannah College of Arts and Design. Her parents, she says, are from Ecuador. The ranting racist told the student she came “over in a f***ing boat” and chastised her for speaking Spanish in front of the white customers.

“In America, I can speak f—— Spanish if I want to,” Riofrio said.

When Riofrio hit back at the man calling him a racist, he gladly accepted the title saying, “I know I am.”

“Yeah, sure am. That’s me. I built this f***ing country,” the racist man admitted.

Others started to jump in and help Riofrio and ordered the man to leave.

“At first I was really surprised and shocked but then I realized these people, there’s a lot of people in this country and sadly us people that are foreigners that speak other languages, not only Latinas, others, have to sadly face this,” Riofrio told reporters.

“A lot of people say, ‘Are you okay, are you afraid?’ But I am not, actually,” Riofrio said. “I am never going to stop speaking Spanish in front of white people… I feel proud of where I am come from.”

A McDonald’s employee told the man to leave. The video circulated widely on social media and resulted in the man’s firing from the Sheriff’s office.