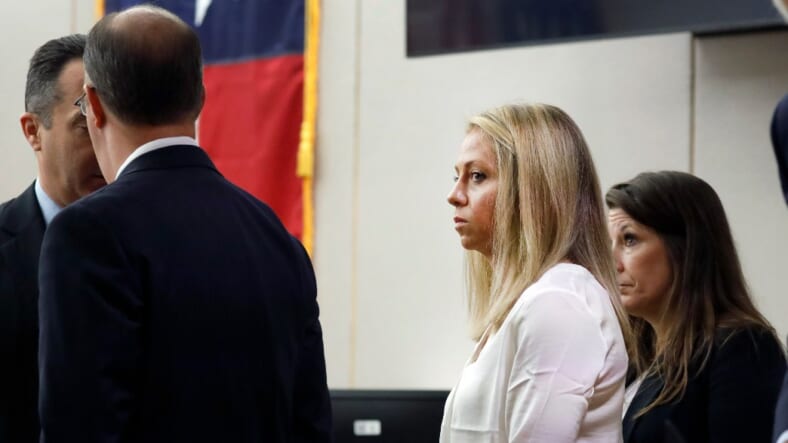 Fired Dallas police Officer Amber Guyger (center) appears in the 204th District Court at the Frank Crowley Courts Building in Dallas, Saturday, September 28, 2019. Guyger, who is facing a murder charge, shot and killed Botham Jean, an unarmed 26-year-old neighbor in his own apartment last year. She told police she thought his apartment was her own and that he was an intruder. (Tom Fox/The Dallas Morning News/Pool)

Over the weekend, testimony in the murder trial of former Dallas police officer Amber Guyger continued. Guyger is on trial for fatally shooting Botham Jean twice in the chest after entering is apartment by mistake last September. Jean would have celebrated his 27th birthday on Saturday if he had lived to see it.

On the same day, Judge Tammy Kemp called for the case to proceed, but determined that the jury did not need to be present for the testimony of the first witness.

Expert testimony began with retired Dallas ISD Police Chief, Craig Miller, who said that Guyger may have suffered from something called, “Inattentional blindness,” when she first came to Jean’s doorway. Miller explained that this is when any person temporarily filters out visual images that are noticeable because he or she is focused on one some other primary object or target, but he could not say definitely that Guyger suffered from this phenomenon.

Miller testified that in his 37-years of being on the police force, the first shot is usually the most accurate when officer’s shoot their weapon. He also said that it would be logical for Jean to have “ducked” when Guyger entered his apartment with her gun drawn. Based upon the facts, Miller believes that Guyger’s use of force in this scenario was reasonable.

Judge Kemp took it upon herself to ask a number of questions to better understand the state of “Inattentional blindness,” and upon the conclusion of Miller’s testimony, decided that it would be fair to allow the jury to hear his expertise on that subject alone. She, however, would not allow his testimony on whether or not Guyger’s actions were “reasonable,” the use of deadly force was reasonable or on the logical assumptions of how Jean reacted and moved that night.

“If that’s the conclusion that a jury wishes to reach, I don’t believe they need experts to tell them that,” said Kemp.

After taking a break, the jury returned and the court briefly brought lead investigator, Texas Ranger David Armstrong back on the stand to talk about the stress Guyger encountered during the shooting. It was determined that Armstrong, who has previously said that he believes Guyger did not commit a crime, can only testify to his abilities as an expert, and not regarding what Guyger may or may not have been thinking at the time of the shooting, which would be speculation.

This all followed an extremely emotional day of testimony from Guyger herself who took the stand on Friday to testify that she was genuinely afraid for her life when she shot Jean after entering the wrong apartment.

After the 31-year old broke down in tears twice on the stand, she claimed that she shot Jean in self-defense claiming that he came towards her as she shouted at him to show his hands.

If the jury believes that Guyger acted in self-defense and her actions were reasonable, she will be acquitted of all charges.

The trial resumes on Monday at 9:30 a.m.(CT), but there is speculation that the defense will rest its case followed by closing arguments.

Wendy L. Wilson is the managing editor of theGrio. Follow her rants, raves, and reviews on Twitter @WendyLWilson_