Botham Jean’s brother says to Amber Guyger in court: ‘I forgive you’

Brendt Jean, brother of Botham Jean, gives a remarkable victim statement where he says he forgives the woman who killed his brother. (WFAA Screengrab)

Forgiveness is one of the hardest tasks a person can perform, especially in the wake of experiencing inconsolable grief. At just 18 years old, Brandt Jean, has just showed the world one of the most extraordinary examples of forgiveness we may have ever seen.

On Wednesday, Amber Guyger received a sentence of 10 years for the murder of Botham Jean. Guyger is the former Dallas police officer who fatally shot Jean when she mistakenly entered his apartment last September. She was found guilty of his murder earlier this week.

READ MORE: Jury selection begins in murder trial of Botham Jean one year after his death

The outrage immediately poured through social media and within the halls of the Dallas County Court House as soon as the 10 year sentence was made public. It was an exceptionally hard pill to swallow knowing that Guyger was facing a minimum of five years and a maximum of 99 years. The realization is that at just 10 years of incarceration ahead of her, Guyger will be released by or before her 41st birthday.

However, the most remarkable part of today’s sentencing was when Jean’s younger brother took the stand for his victim statement, which was spoken straight from his heart. Brandt Jean obviously did not prepare what he was going to say and yet his words left the entire court room in tears.

#NEW: Botham Jean’s brother says he forgives Amber Guyger, wants the best for her, hopes she gives her life to Christ, and then asks her for a hug: pic.twitter.com/Q246XctNN0

“I don’t want to say twice or for the 100th time how much you have taken from us. I think you know that, but I just.. I hope you go to God with all the guilt and all the bad things you have done in the past. Each and every one of us may have done something that we have not supposed to do if you truly are sorry, I know I can speak for myself, I forgive you,” said Jean.

I know if you go to God and ask him, he will forgive you. I don’t think anyone can say it, I’m speaking for myself and not even for my family, but I love you just like anyone else. I’m not going to say that I hope you rot and die just like my brother did but I personally want the best for you. I wasn’t going to ever say this in front of my family or anyone, but I don’t even want you to go to jail. I want the best for you because I know that’s exactly what Botham would want you to do. The best would be for you to give your life to Christ. I think giving you life to Christ would be the best thing that Botham would want you to do. I love you as a person and I don’t wish anything bad for you.

Those statements shocked the courtroom. No one expected this young man to have exude the tenants of Christian forgiveness (“thou shalt love thy neighbor as thyself” is after all the Golden Rule) so poignantly, but then go even further and plead with the judge to give Guyger a hug. 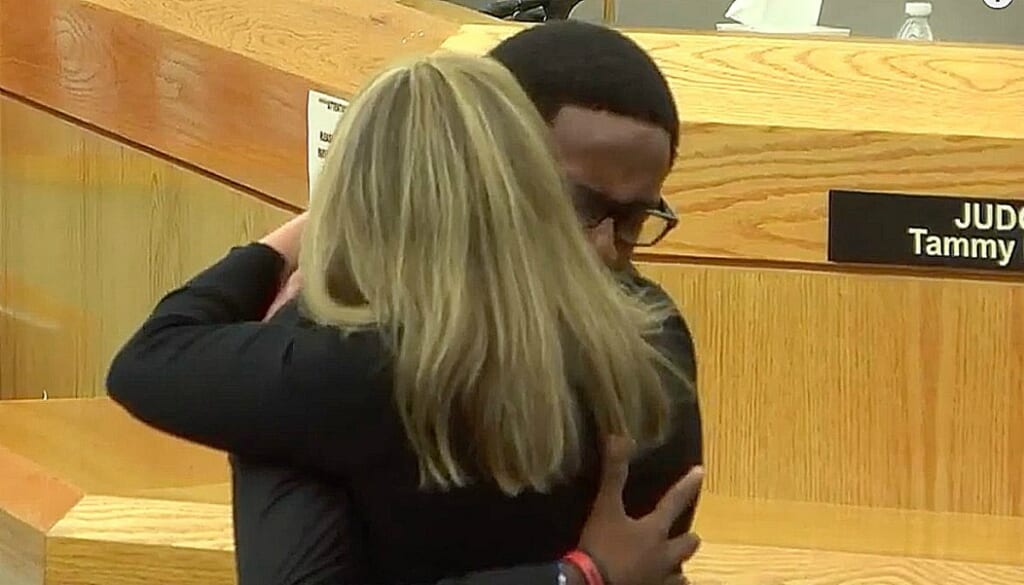 Brendt Jean, brother of Botham Jean hugs Amber Guyger, who was convicted of murder and sentenced to 10 years. (Screengrab)

“In 37 years I was trying to look back in my memory bank to see if I’ve ever seen anything like that and I don’t think I have. It was an amazing act of healing and forgiveness that is rare in the society we live in,” said John Creuzot, Dallas County DA. “That young man is a leader and she should guide us in healing.”

In one selfless act, Brendt seemingly released a year’s worth of pain and suffering that has been a scourge on his family since losing his brother. He also now lives in the truth that Botham would not want Guyger to suffer any more than she already has at this point.

As for Guyger, she will be processed later today and begin serving her 10 year sentence starting this evening.