Nicole Duncan   |
Color of Change is going after Comcast NBCUniversal for petitioning the Supreme Court to challenge the integrity of the Civil Rights Act of 1866, our oldest civil rights statute. (Image by John Hain from Pixabay)

One of the country’s most premiere civil rights advocacy organizations is chiming in on the fight to protect a civil rights laws that came into existence as a result of the end of slavery. Color of Change, founded in 2005, has issued a petition asking the public to push Comcast NBC Universal to withdraw its Supreme Court challenge to the Civil Rights Act of 1866.

The media company has been in litigation with Entertainment Studios and its CEO, billionaire Byron Allen regarding alleged racial discriminatory business practices, designed to exclude people of color from economic parity.

Immediately after slavery, to combat the emerging “Black Codes,” the national government took steps to ensure that former slaves (now citizens) and their children would be able to participate in the liberties that any white citizens enjoy. This would be the origins of The Civil Rights Act of 1866, laws that continue to protect Blacks to this day in business, real estate and various other ways.

The nonprofit suggests that if the public does not raise their voice in protest, many would lose the protection that are currently afforded to Black people in business matters.

“Such a decision would strike down centuries of civil rights progress. Without this landmark legislation, grounds of racial discrimination in business matters will be lost in legal technicalities, causing tremendous harm to Black people, Black businesses, and Black economic equality.” 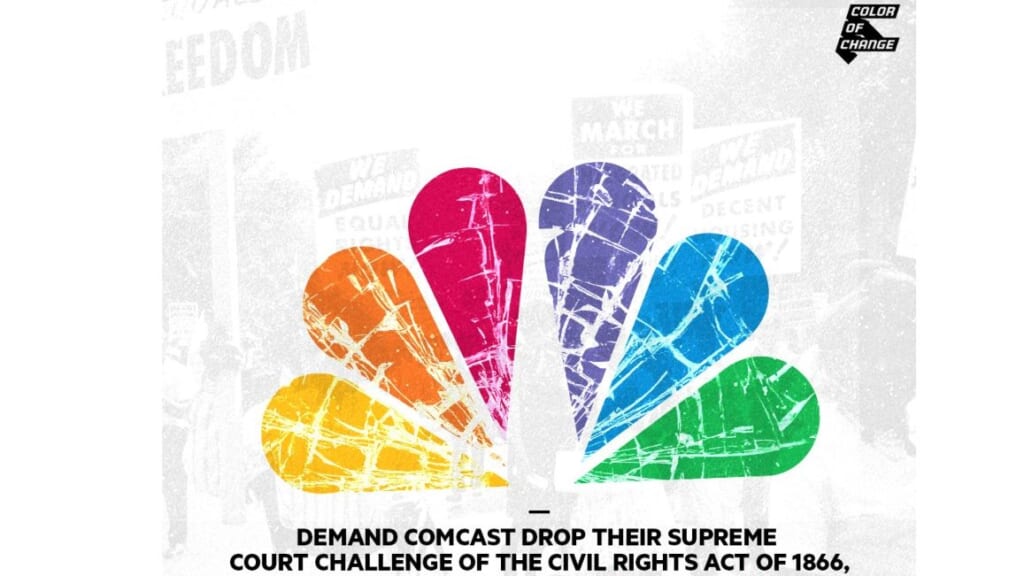 Color of Change is going after Comcast NBCUniversal for petitioning the Supreme Court to challenge the integrity of the Civil Rights Act of 1866, our oldest civil rights statute. (Color of Change logo)

“Comcast is standing on the wrong side of history and siding with a Department of Justice that has been openly hostile toward the civil rights of Black people. Black people already face extensive barriers in accessing justice and economic equality in this country, and this petition would serve only to let corporations off the hook for their discriminatory practices.”

Color of Change would be one of many voices feverishly working to bring awareness to this important move against racial equality. Others included the Los Angeles Urban League , the NAACP , rapper Killer Mike and Berkeley College constitutional law expert, Erwin Chemerinsky.

If you are interested in supporting this fight to protect the country’s oldest civil rights statute, sign the Color of Change petition here.