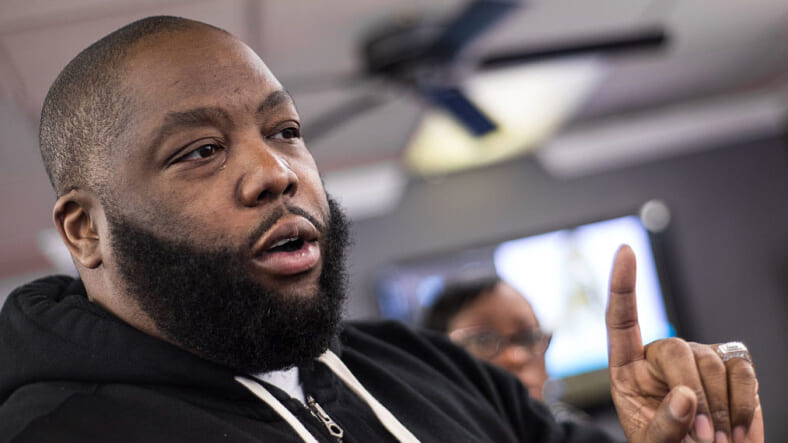 Atlanta born and social justice-centered, Killer Mike is clear about our responsibility as African Americans to one another.

Without a doubt, the rapper/activist believes that as a community, our focus should be one that builds the African American dollar, supports institutions that cultivate Black leadership, and influence Black entrepreneurs to shift culture through deals.

This is especially true in 2019, as the facade of post-racialism that the Obama administration painted fades away, and the potential of a legal decision that could put race relations back at least a century looms.

Read More: OPINION | ‘All wealth ain’t the same’: A look at billionaires Byron Allen and Jay-Z

Comcast and Charter Communications and the U.S. Department of Justice are currently attempting to dismantle the Civil Rights Act of 1866 and deny media mogul Byron Allen (owner of Entertainment Studios) a seat at the table, resulting in a case that goes before the conservative heavy Supreme Court on Nov. 13. Killer Mike first became aware of the case when attorney Antonio Moore broke it down for him.

In an exclusive interview with theGrio, Killer Mike explained his thoughts about the impending Supreme Court review and what other Black people should be doing to ensure our rights won’t be violated.

As a long-time fan of Allen’s, Killer Mike has studied his career for years, even calling him a “genius.”

“I’ve watched Byron Allen and how he works since I was a kid. I love his TV shows and how he eventually started programming shows in those late-night slots. He would purchase the time slots that used to be for infomercials, turn around and sell those ads for his shows. Genius!” says Mike.

As a follower of his work, the rapper understands the usual challenges that Allen has faced over the years as a successful Black entrepreneur. However, he also believes that these challenges must be met with an iron fist.

Read More: BYRON ALLEN: Donald Trump’s Department of Justice and Comcast are Working Together to Destroy a Civil Rights Law in the U.S. Supreme Court

“If everything does not go as planned in this case, Black people have to pull out of Comcast all together,” says Mike.

“We also have to look at the political parties that aren’t supporting him and pull our support from them. We cannot look at this as if we are only fighting for Byron Allen. This is bigger than that.”

It is bigger than just the Entertainment Studios’ head honcho. This is about precedent, and if the Comcast has their way, it’s a decision that will affect Blacks as a whole.

“The Civil Rights Act of 1866 (the law that Entertainment Studios and Allen are using to argue their case) came about right after slavery ended and before Reconstruction. It was supposed to ensure that Blacks had fair shake in business,” explains Mike.

Unfortunately, that hasn’t always happened. Case in point, there’s only one Bob Johnson, America’s first and only Black billionaire, when there could be many more. Systematic racism has put huge hurdles in the way causing the playing field to be far from equal.

“If Allen is playing fair, and he has the capacity to produce quality programming, why would they not allow him space at Comcast? You can’t say people are not interested- everyone needs the weather,” Killer Mike says of Allen, who acquired the Weather Channel for $300 million last year.

“There is quality control with his networks, so what more do they want.”

Read More: Are Black media companies being blocked from business?

We anticipate the answer will become clear during trial, but there are some things that Mike does believe can help this cause outside of the legal system. When we see that Black moguls are not being treated fairly, the community cannot let them fight alone.

“We have to ask ourselves, are we willing to withhold our vote? If he is going to win, the community simply has to stand firm behind him.”

If no one else has Allen’s back, it seems as if the “Ric Flair” emcee does.

TheGrio is owned and operated by Entertainment Studios, LLC.