The killer was sentenced to 20 years in prison. 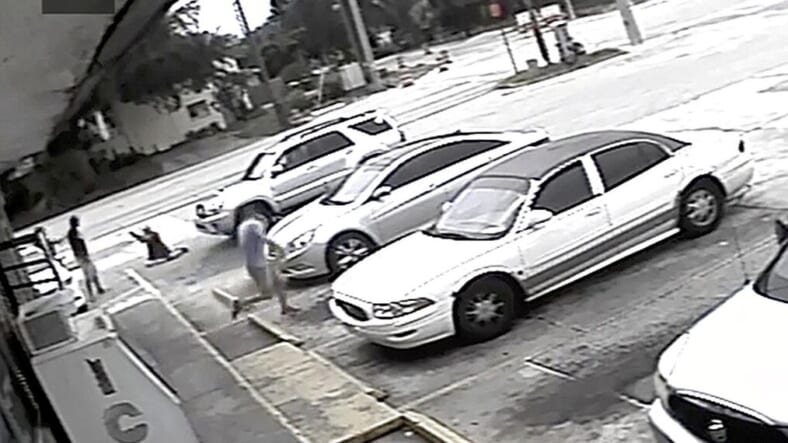 FILE – In this Thursday, July 19, 2018 file image taken from surveillance video released by the Pinellas County Sheriff’s Office, Markeis McGlockton, far left, is shot by Michael Drejka during an altercation in the parking lot of a convenience store in Clearwater, Fla. Drejka, of Florida, who told detectives that he was irritated by people who illegally park in handicapped spots will be sentenced Thursday, Oct. 10, 2019, in the fatal shooting of McGlockton, an unarmed black man outside a convenience store. A jury found him guilty of manslaughter in August. (Pinellas County Sheriff’s Office via AP, File)

Michael Drejka, the white man charged and convicted of killing a Black man over a parking space dispute, was handed a 20-year prison sentence, a Florida judge ruled Thursday.

On Thursday, justice was served for the family of 28-year-old Markeis McGlockton who initially fought for Drejka’s arrest after the Pinellas County sheriff’s department refused to press charges after he fatally shot McGlockton in front of his 5-year-old child and girlfriend.

Pinellas County Sheriff Bob Gaultieri said at the time of the shooting that he didn’t plan to charge Drejka since McGlockton pushed him down first sparking outrage around the country.

A public outcry about the case resulted in charges being filed by the Pinellas County Sheriff’s Office a month later. In August, Drejka was found guilty of manslaughter.

McGlockton’s father spoke before the sentencing, saying that he is not ready to forgive the convicted murderer for what happened to his son and offered some intense words about possibly squaring up with his son’s killer in the future, NBC News reports.

“In the Bible, it says in order to get into heaven, we must forgive those who trespass against us,” Michael McGlockton said Thursday. “At this point in my life, I am not there yet. And if it just so happens that the Lord chooses to take me before I come to terms with this, then I will see you in hell where you and I will finish this. Mark my words.”

McGlockton’s mother, Monica Moore-Robinson, also spoke before the sentencing, saying “I will never forgive you” as she tearfully talked about all of the family moments her son will never get to experience.

Circuit Judge Joseph Bulone said that Drejka acted irresponsibly to the situation that stemmed from his confrontation with girlfriend Britany Jacobs. Drejka acted as a “wannabe” cop when he questioned her about parking in a handicap spot.

McGlockton emerged from a convenience store with his 5-year-old son in tow and saw Drejka arguing with his girlfriend and pushed him down. A slow-motion video showed that McGlockton was trying to run away when Drejka pulled his gun out and shot him dead.

Drejka’s ‘Stand Your Ground’ defense, which worked for George Zimmerman in the Trayvon Martin killing, didn’t work in this case.

A white man who shot dead an unarmed Black man in front of his children during an argument about a parking space was sentenced to 20 years in prison.

Prosecutors originally declined to charge him because of Florida’s “stand your ground” law.