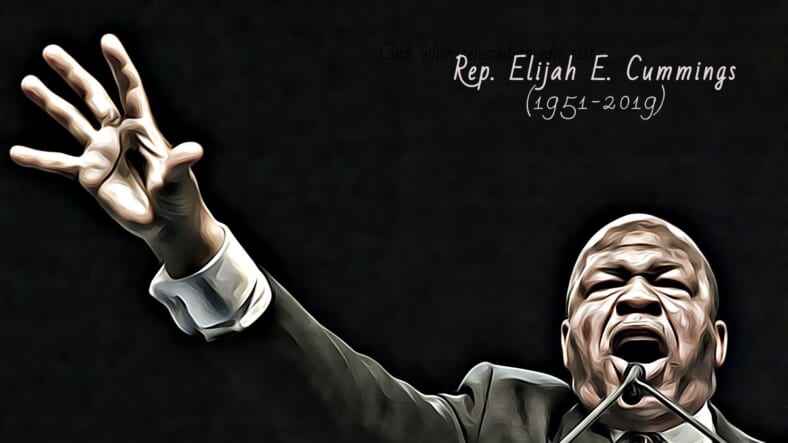 Many of us woke up the sad news this morning that legendary Baltimore Democratic Congressman, Rep. Elijah Cummings, had passed away.  Cummings chaired the House Oversight Committee and was an ardent supporter of the impeachment of President Donald Trump. In fact, he was one of the political leaders guiding the impeachment inquiry from the House Democrats.

Cummings, who was 68, died early Thursday at Johns Hopkins Hospital from complications from longstanding health challenges, according to a statement provided by his office.

An outpouring of sympathetic words and statements have been issued since the news broke, particularly from his former colleagues in office. In fact, even Donald Trump has issued a personal statement on Cummings passing and supplied a statement on behalf of the White House saying, “as a mark of respect for the memory and longstanding public service of Representative Elijah E. Cummings, of Maryland,” the flag of the United States shall be flown at half-staff at the White House and upon all public buildings and grounds, through October 18, 2019.

Here are a few of the public figures who will clearly miss this amazing public servant.

“Michelle and I are heartbroken over the passing of our friend, Elijah Cummings. As Chairman of the House Oversight Committee, he showed us all not only the importance of checks and balances within our democracy, but also the necessity of good people stewarding it. Steely yet compassionate, principled yet open to new perspectives, Chairman Cummings remained steadfast in his pursuit of truth, justice, and reconciliation. It’s a tribute to his native Baltimore that one of its own brought such character, tact, and resolve into the halls of power every day. And true to the giants of progress he followed into public service, Chairman Cummings stood tallest and most resolute when our country needed him the most. May his example inspire more Americans to pick up the baton and carry it forward in a manner worthy of his service. Our deepest sympathies and abiding love go to his wife, Maya, his three children, and all those whose lives he touched.”

Pelosi was visibly emotional and she said she was “devastated” by this loss. She announced that House members discussed naming legislation after Cummings tied to lowering the cost of prescription medication.

“Elijah was a fighter for low income and prescription drugs, reaching across the aisle to do so. He always chose to reach across the aisle and treat all of our colleagues with respect and even had dialogue with the President for a while on this subject.”

Pelosi remembers the late Rep. Elijah Cummings: “He lived the American dream and he wanted it for everyone else. He spoke with unsurpassed clarity and moral integrity when he spoke on the floor.” https://t.co/bYrSEHy1Sm pic.twitter.com/vbxu5gGiN0 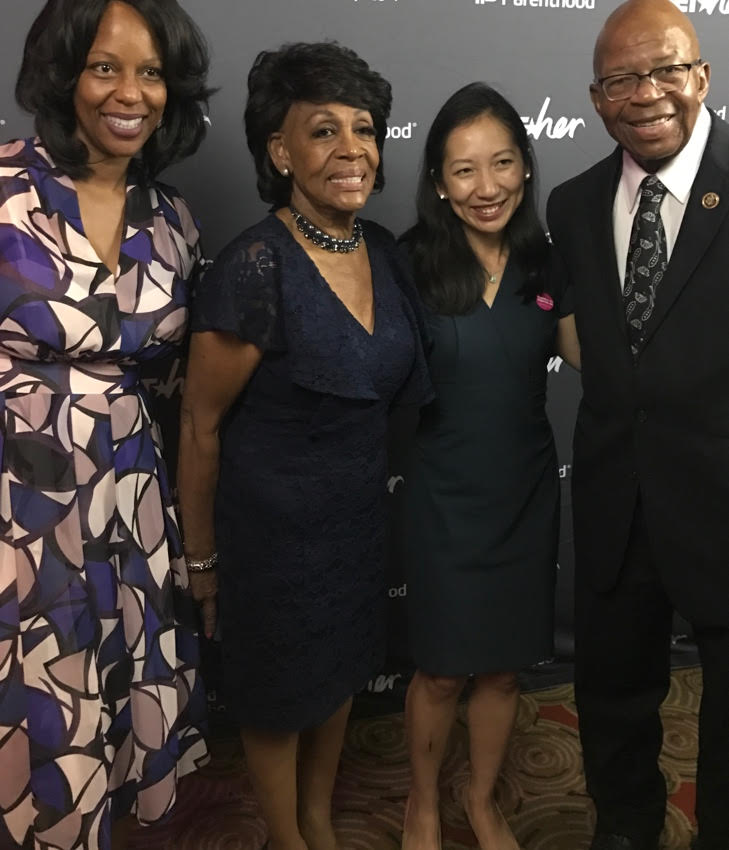 “There are no words that are sufficient in describing the immense sorrow I feel following the passing of my dear colleague and friend, Chairman Elijah Cummings.

“Elijah Cummings fought the good fight, and his legacy represents an unwavering love for his community and a tireless commitment to public service. He was and always will be remembered as a beacon of truth and light in the face of unprecedented lies and corruption.

“There is perhaps no other Member of Congress who is so respected, admired, and loved by his colleagues on both sides of the aisle as the one and only Elijah Cummings. He was a true patriot and a giant among men. His absence leaves a gaping hole in our hearts and the halls of Congress. I love him, I will miss him, and my deepest condolences and prayers are with his loving wife, Dr. Maya Rockeymoore Cummings, his family, his beloved hometown of Baltimore, and all those who loved him.”

Our nation has lost a mighty fighter for democracy, accountability, equity and justice with the tragic loss of Congressman Elijah Cummings. He never forgot that his was borrowed power, which he wielded in defense of the vulnerable and on behalf of the American people. #RIPElijah

Today our country lost a true leader. Congressman Elijah Cummings was a friend, a passionate fighter for justice, and a powerful voice of moral conscience in our government who served his country for decades with dignity and integrity. I’m blessed to have known him. #RIPElijah

Today our country lost a true leader. Congressman Elijah Cummings was a friend, a passionate fighter for justice, and a powerful voice of moral conscience in our government who served his country for decades with dignity and integrity. I’m blessed to have known him. #RIPElijah

Salute to A Great Man.We appreciated your relentless,unwavering commitment to our community and the country . You’re irreplaceable and that speaks volumes to the legacy that colors YOU. Sound the trumpets and open the doors and windows of Heaven a man from God is home.#RIPElijah pic.twitter.com/gkr0WsPnHn

“I’m deeply saddened by the news of Chairman Cummings’ passing. Our nation has not only lost a true leader and pioneer, but I have lost a dear friend and mentor. In an era where our politics have been plagued by coarseness and personal attacks, Elijah represented grace, dignity and empathy under the most trying of circumstances. His legacy – his fight for fairness, justice, and equality – should be an inspiration to us all. My heart goes out to his family.”

Today, our nation has lost a true leader and pioneer, and I have lost a dear friend and mentor. You will be missed, @RepCummings. pic.twitter.com/vxKj4SVT3u

My heart is heavy with a flood of tears waking up to the news my friend @RepCummings has died! Rest in peace my friend. May God be with your wife, your family, friends & the City of Baltimore who mourns your loss. May the Nation & the world remember your heat & your fight.

Rep. Cummings sought to have the fearless “squad” freshman women on his committee because he wanted them on his team. And he was just a nice guy; consistently kind to me and my family, whenever we were lucky enough to run into him. I always learned something talking with him. pic.twitter.com/XHsNWzKZGx

A devastating loss for our country.

Chairman Cummings was a giant: a universally respected leader who brought profound insight, commitment, and moral fortitude to Congress.

His guidance and vision was an enormous gift. I will forever cherish his example. May he rest in power. https://t.co/D0RsKsM5fh

Rest In Peace, Elijah Cummings. His passing would be a huge loss to his family, his district and his country under any circumstances. But this particular moment puts his absence into even sharper relief.

This one has broken me.
I am broken. @RepCummings was a lion. A fierce warrior for justice. He was principled and kind. His spirit was pure & his moral compass was true. He will be GREATLY missed.

POTUS posts a phony eulogy to #ElijahCummings, who died today. After trashing Mr Cummings, a leader of the civil rights movement, and calling his district rat-infested, which probably broke his heart, this repulsive biped has the gall to pretend he admired him; it makes me sick.

Rest In Power #ElijahCummings … Woke up this morning to learn of the heartbreaking loss of a beloved and great leader. At a time when principled, effective bipartisanship is almost nonexistent, this loss is especially devastating… pic.twitter.com/QgmVh2vu8B

Congressman Elijah Cummings was relentless in his pursuit of justice. A son of sharecroppers, he broke many barriers in his lifetime. He was a kind man and a powerful example of a true public servant. Today, my heart is so heavy. Rest peacefully sir, we will continue the work.