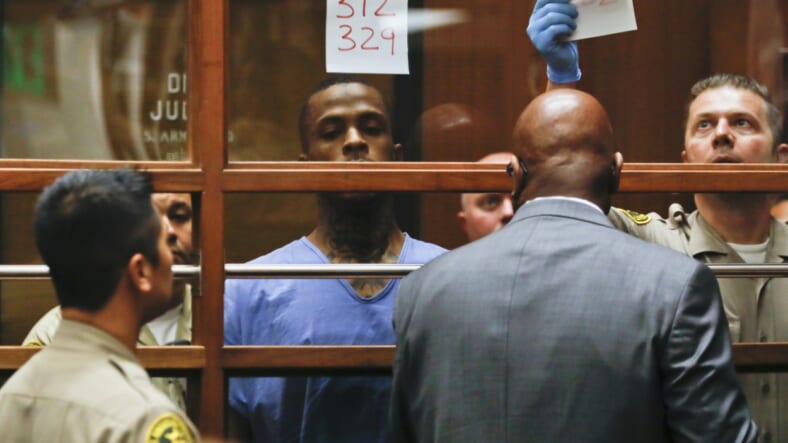 Eric Holder, middle, the suspect in the killing of rapper Nipsey Hussle is seen with his then- attorney, Christopher Darden, front right, in Los Angeles County Superior Court Thursday, April 4, 2019.

Attorneys working on behalf of Eric Holder, the man accused of killing rapper Nipsey Hussle, are requesting that two of his charges be dismissed after he appeared in a pretrial hearing in Los Angeles last week.

Prosecutors say Holder fatally shot Hussle, 33,  after having an argument with him in front of his Marathon Clothing Store in South L.A. earlier this year. He was ultimately charged with one count of murder as well as two counts of attempted murder for shooting a man named Kerry Lathan and his nephew. Holder was also charged with one count of possession of a firearm by a felon.

But according to AllHipHop, his legal team wants the two counts of attempted murder dropped because the attempted murder charges fit within the “Kill Zone” theory, which is based on whether the shooter intended to kill the other people who were injured.

Deputy District Attorney, John McKinney, believe’s Holder’s case fits within the “Kill Zone” parameters and suspects the attempt to have the two charges dropped is just a ploy to prolong the case. McKinney also points out that the alleged shooter waived his right to have a trial within 60 days after his indictment.

“Given the magnitude of the case, the complexities of the case, work his defense attorney needs to do, he knew it wasn’t in his best interest to try to go to trial right now,” McKinney recently told USC Annenberg’s student run news website Annenberg Media.

Holder is set to appear in court on November 11 where prosecutors will most likely formally object to his motion to dismiss the attempted murder charges. If that happens, a judge is expected to then set a date for his trial in the case.