The controversial lawyer who is best known for failing to prosecute OJ, copped out after one too many threats 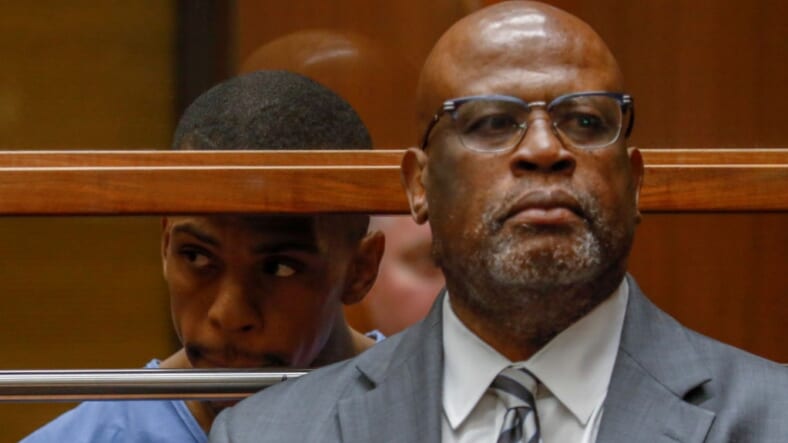 Attorney Christopher Darden announced that he is withdrawing from the defense of Nipsey Hustle’s alleged killer. (Photo by Francine Orr-Pool/Getty Images)

Christopher Darden, the lawyer defending Nipsey Hussle‘s presumed murderer Eric Holder, has withdrawn defense, citing that he and his family have been exposed to a number of death threats since news of his representation went public.

Back in April, Darden made headlines when he decided to take on Holder’s case. The Los Angeles prosecutor was first made infamous back in 1995 after he tried- and failed – to attain a guilty verdict in the O.J. Simpson murder trial.

Darden took to his Facebook page to reveal the news of his withdrawal from The People v. Holder case , as well as issue an explicit PSA to the people who threatened his family.

“To those who issued those threats to my children please pay close attention so there is no misunderstanding. Later. FUCK Y**! As for me, I continue to thrive.”

The attorney also issued a more subtle statement via video, to TMZ Live:

“Well you know, it’s the same old things. It’s 1995 all over again,” Holden kicked off, mirroring his controversy with Holder to that of Simpson. “Except, this time some folks are upset that I should represent a probable… African American man who is charged with murder. I’ve received threats, and my family, my children, been harassed [and] threatened. It’s just really outrageous, and I’m sick of it.”

Holder then continued to affirm that his decision to withdraw from the case was purely family-based, and that personal threats made don’t “interfere” with his decision making.

“I don’t know if people are going to realize… I don’t play that. It doesn’t interfere with what I do. I continue to practice law and represent my clients to the best of my ability. But you have these people who are saying these things and really created security issues for my family. [But] nobody can bully me.

No one can bully me when it comes to representing my clients and doing what I think is right. I’m a lawyer sworn to uphold the constitution. It’s what I do everyday. Included in the constitution is the sixth amendment. The right of every man charged with a crime, to consul of his choice.”

The 63-year-old then went on call out his “haters,” before wrapping up and letting folks know that despite controversy, he’s still good in the hood.

“For every hater out there, there are a hundred people in the Black community who support me, support my work and support my family…. I’m going to get grits and eggs when I finish my court appearances today in the hood like I do every Friday.”