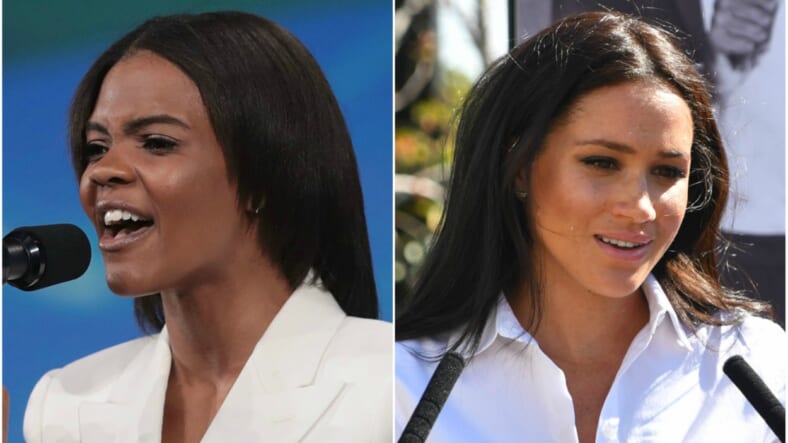 Conservative commentator Candace Owens has never been one to mince words and now she is taking aim at Meghan Markle, going so far as to call her a ‘witch’ after the new mother opened up about the difficulties she has faced over the past year.

According to The Daily Mail, Monday, the vocal Trump supporter took to social media to lash out at Markle, as well as her husband Prince Harry.

READ MORE: Meghan Markle close to tears in rare TV interview: ‘Not many people have asked if I’m OK’

“Using African children as a backdrop to complain about your over-privileged life is offensive,” Owens blasted about Markle to her 1.7 million followers.

Using African children as a backdrop to complain about your over-privileged life is offensive.
Invoking your own mother’s tragic death to demand the press stop calling out your hypocritical wife is downright disgusting.

Meghan Markle is a witch.
Harry is under her spell.

She also came after Prince Harry for comparing his wife to his mother, the late Princess Diana. “Invoking your own mother’s tragic death to demand the press stop calling out your hypocritical wife is downright disgusting.”

Her slams against Meghan and Harry comes on the heels of the release of the ITV documentary, Harry & Meghan: An African Journey. In the special, which will be airing in America on Wednesday, the actress admits she “naively” dismissed the warnings about becoming a member of the royal family, because as an American she didn’t truly understand how vicious the British press could be.

“I never thought this would be easy but I thought it would be fair. And that is the part that is hard to reconcile,” she confesses during the special. “But (I) just take each day as it comes.”

“Any woman, especially when they’re pregnant, you’re really vulnerable. And so that was made really challenging, and then when you have a newborn, you know?” she said of her struggles.

For his part, Harry has been defensive of his wife, fearing that the constant magnifying glass his wife has been under will result in the same tragedy that took the life of his mother in a Paris auto crash in 1997.

“I will not be bullied into playing a game that killed my mum,” Harry declared during the rare glimpse into the couple’s private life.