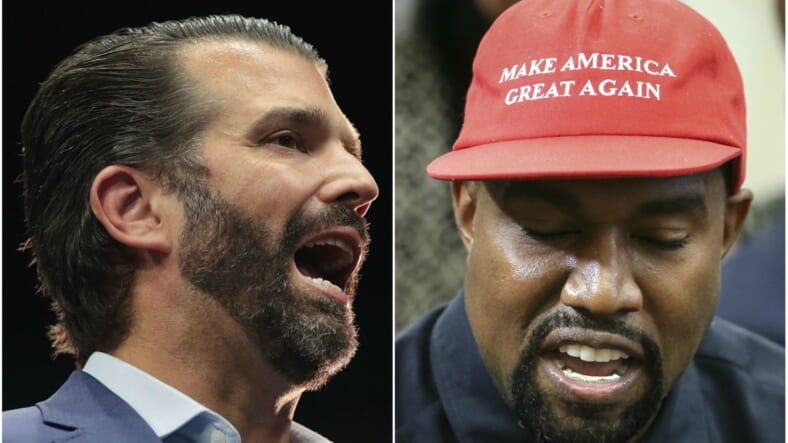 Kanye West’s latest offering, “Jesus is King” instantly became the talk of the Twitterverse when it dropped last week. But among those raving about it is surprisingly Donald Trump Jr.

Kanye West is cracking the culture code.@kanyewest’s new album #JesusIsKing is the epitome of fearless creativity and “dangerous, unapproved” ideas.

Leftists always try to silence those who are speaking truth. They’re waging a war on our family and culture.

Kanye is a pioneer pic.twitter.com/EmPgLqgGZJ

West, who in the past has publicly remarked about his support for the president, proved to be king of the box office over the weekend when the album’s accompanying 30-minute short film collected $1.03 million globally.

Most recently on Big Boy TV, while promoting his new songs, Kanye proclaimed that the Democratic Party “brainwashes” Black people.

“The culture has you focused so much on f*ckin’ somebody [sic] b*tch and pullin’ up in a foreign and rappin’ about things that could get you locked up,” he said. “And then saying you about prison reform… We brainwashed out here, bro. This is a free man talking. Democrats had us voting Democrat for food stamps for years, bro. Guns in the eighties, taking the fathers out the home, Plan B, lowering our votes, making us abortion our children… ‘Thou shall not kill.’”

To which Trump Jr. apparently agreed.

“Leftists always try to silence those who are speaking truth. They’re waging a war on our family and culture,” Trump Jr. wrote in his tweet praising Ye’s “Jesus Is King” album,

“Kanye is a pioneer,” he added.

When Yeezy met with President Trump last October inside the Oval Office, the rapper compared wearing a MAGA hat to feeling like Superman.

“There was something about putting this hat on that made me feel like Superman,” West said. He also noted that Trump is on a “hero’s journey.”

“Trump is on his hero’s journey right now. He might not have thought he’d have a crazy mother-f***r like me (supporting him),” he added.