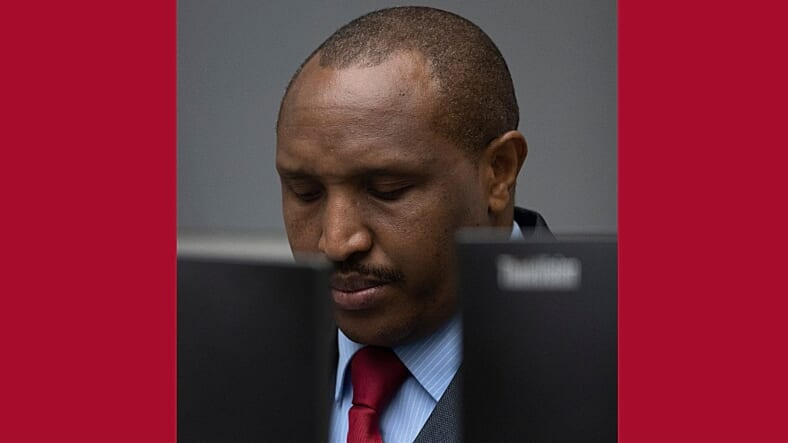 Congolese militia commander Bosco Ntaganda enters the courtroom of the International Criminal Court, or ICC, to hear the sentence in his trial in The Hague, Netherlands, Thursday, Nov. 7, 2019. The ICC delivered the sentence on Ntaganda, accused of overseeing the slaughter of civilians by his soldiers in the Democratic Republic of Congo in 2002 and 2003. (AP Photo/Peter Dejong, Pool)

THE HAGUE, Netherlands (AP) — The International Criminal Court passed its highest ever sentence Thursday, sending a Congolese warlord known as “The Terminator” to prison for 30 years for crimes including murder, rape and sexual slavery.

Bosco Ntaganda was found guilty in July of 18 counts of war crimes and crimes against humanity for his role as a military commander in atrocities during a bloody ethnic conflict in a mineral-rich region of Congo in 2002-2003.

Ntaganda showed no emotion as Presiding Judge Robert Fremr passed sentences ranging from eight years to 30 years for individual crimes and an overarching sentence of 30 years.

The court’s maximum sentence is 30 years, although judges also have the discretion to impose a life sentence. Lawyers representing victims in the case had called for a life term.

Fremr said despite the gravity of the crimes and Ntaganda’s culpability, his convictions “do not warrant a sentence of life imprisonment.” Ida Sawyer, deputy director of Human Rights Watch’s Africa division, welcomed the ruling. 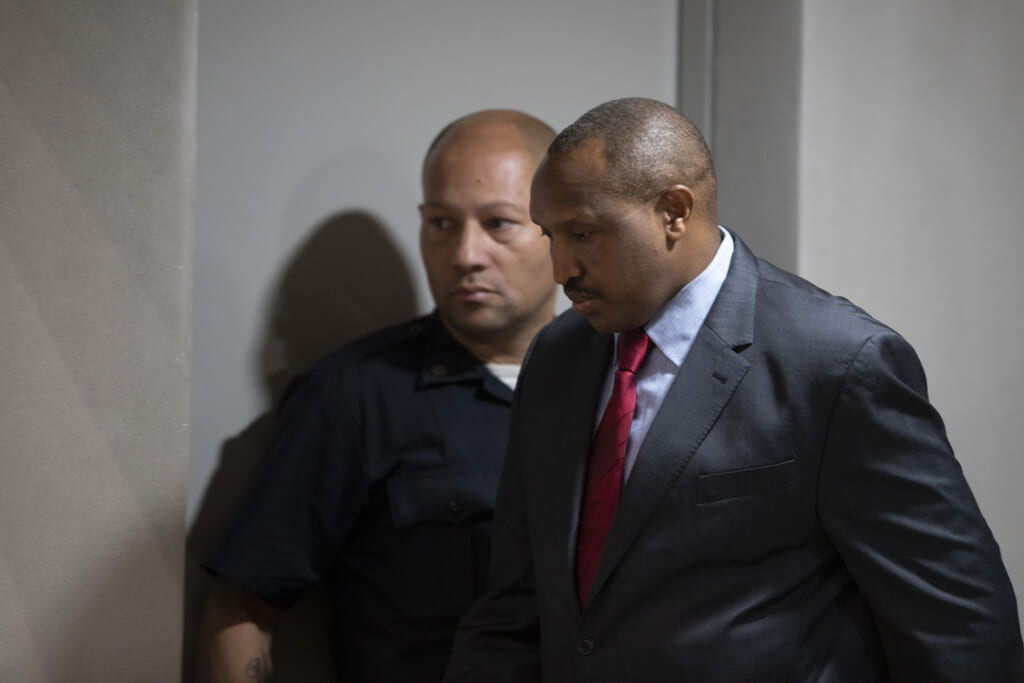 Congolese militia commander Bosco Ntaganda, right, enters the courtroom of the International Criminal Court, or ICC, to hear the sentence in his trial in The Hague, Netherlands, Thursday, Nov. 7, 2019. (AP Photo/Peter Dejong, Pool)

“Bosco Ntaganda’s 30-year sentence sends a strong message that even people considered untouchable may one day be held to account,” Sawyer said.

READ MORE: Ebola cases in the Congo rises to more than 900 breaking record

Jolino Makelele, a spokesman for the government in Democratic Republic of Congo, or DRC, said: “We think that justice was done for the victims.”
Ntaganda, who has insisted he is innocent, became a symbol of widespread impunity in Africa in the seven-odd years between first being indicted by the global court and finally turning himself in in 2013 as his powerbase fell apart.

Physicians for Human Rights said the sentencing set an important precedent. But Karen Naimer, who directs the group’s program on sexual violence in conflict zones, added that “international and local prosecution efforts must be dramatically strengthened if we are to curb the rampant impunity for mass atrocities we see in the DRC and elsewhere around the world.”

Judges at Ntaganda’s trial said he was guilty as a direct perpetrator of a murder and as an indirect co-perpetrator of a string of crimes including murders, rapes of men and women, a massacre in a banana field and of enlisting and using child soldiers.

Child soldiers also were raped by Ntaganda’s troops and forced into sexual slavery, leaving them with lasting physical and psychological scars. Ntaganda himself used child soldiers as bodyguards.

“Some individuals who survived or witnessed the murders and attempted murders that Mr. Ntaganda was convicted of still bear permanent scars, both physical and psychological, including long-term memory loss, neurological disturbances and extensive physical scarring,” Fremr said.

Ntaganda testified for weeks in his own defense, saying he wanted to put the record straight about his reputation as a ruthless military leader.
He was the deputy chief of staff and commander of operations for rebel group the Patriotic Forces for the Liberation of Congo. The force’s leader, Thomas Lubanga, was convicted by the ICC in 2012 of using child soldiers.

He is serving a 14-year prison sentence.

In their unanimous 117-page ruling, the three judges said they could find no mitigating factors that warranted reducing Ntaganda’s sentence.

But they found plenty of aggravating circumstances, identifying in the murder convictions the “particular cruelty” of several crimes, the “defenselessness of some of the victims” and the fact that Ntaganda, as a high-ranking commander, personally murdered a man in front of his subordinates.

“This sentence will help heal not only survivors but those who lost their loved ones during the atrocities of Bosco Ntaganda,” Macky said. 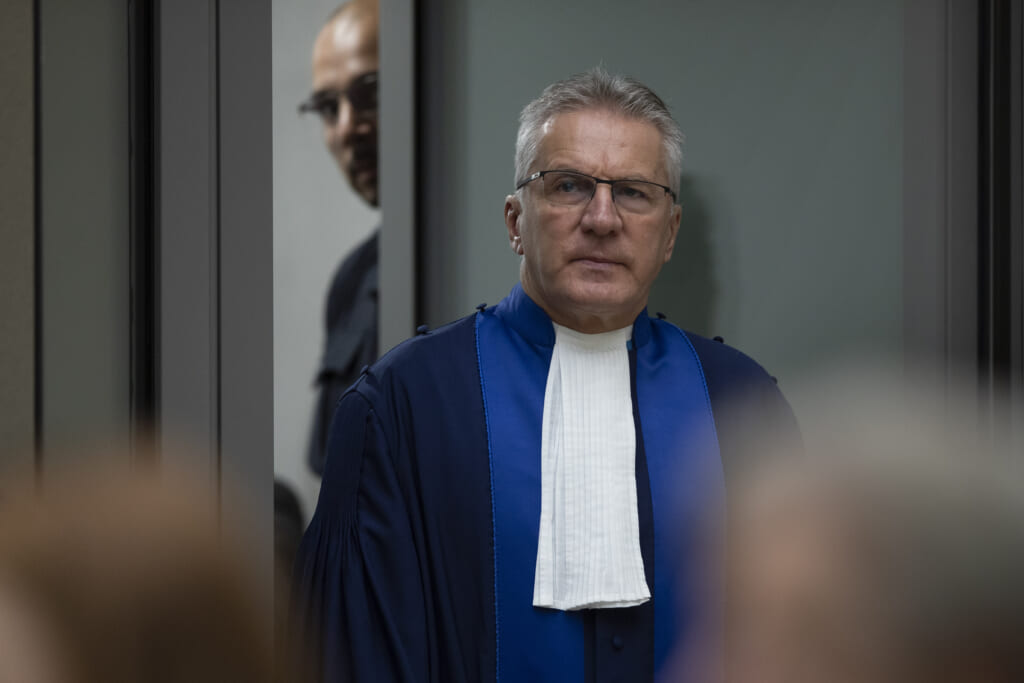 Under the court’s rules, victims can apply for reparations. The court said in a statement that “issues related to the procedure for victims’ reparations will be addressed in due course.”

The Hague-based court was set up to prosecute atrocities around the world where national authorities are unable or unwilling to hold trials. It has faced opposition and criticism, most notably from the United States, which is not a member state of the court.

President Donald Trump’s former national security adviser, John Bolton, last year said the U.S. wouldn’t cooperate with the court, adding that “for all intents and purposes, the ICC is already dead to us.”

Saleh Mwanamilongo in Kinshasa, Congo, and Al-Hadji Kudra Maliro in Beni, Congo, contributed to this report.