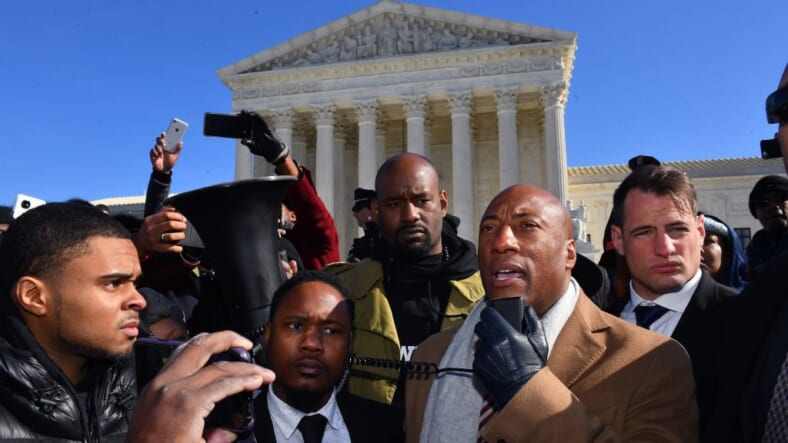 WASHINGTON — An 1866 Reconstruction era law was put to the test Tuesday when Supreme Court justices wrestled with the standard that television executive Byron Allen must meet to move forward with his discrimination complaint against Comcast Corp.

“[The statute] has been in the books for over 153 years and there has never been any ambiguity about this particular statute until we really tried to use it,” Allen said in an interview with theGrio before entering the court.

In 2015, Allen sued Comcast under Section 1981 of the Civil Rights Act of 1866, a post-Civil War statute that allowed “all persons within the jurisdiction of the United States” to have the same right to uphold contracts “as is enjoyed by white citizens.”

Allen, founder and CEO of Entertainment Studios Networks (parent company of theGrio), maintains that Comcast declined to pick up ESN’s channels solely on the basis of his race. Comcast contends that Allen must demonstrate there were no other reasons behind the corporation’s decision.

The case was rejected three times by the Central District Court of California before the 9th U.S. Circuit Court of Appeals ruled that Allen’s claims were plausible. In April, Comcast filed a petition with the U.S. Supreme Court following the judgement.

“I don’t know why the Ninth Circuit did what it did here and I don’t know why the respondents (Allen) have argued the case the way they did here,” said Justice Samuel Alito, who shared skepticism with justices from both ends of the ideological spectrum on the appeals court’s reasoning.

Attorney Miguel Estrada, representing Comcast, argued that Section 1981 requires “but-for” causation, meaning that race must be proved to be the only reason behind the corporation’s decision to not add ESN’s channels.

In January, Comcast launched two black-owned channels, Afro and Cleo TV, fulfilling a 2011 acquisition deal with NBC Universal. In 2015, a similar lawsuit against AT&T was settled along with an agreement to add ESN’s channels to DirecTV.

Estrada said if the 9th Circuit’s decision was affirmed by the Supreme Court, it would be “vastly easier [for other cases in the future] to recover damages under Section 1981.” He said allegations that race was a motivating factor in a case should not be confused with evidence of discrimination. “And, in our view, that’s what we have in this case,” he said referencing a previous opinion by the now retired Supreme Court justice David Souter.

Justice Elena Kagan wrestled with the idea of two standards regarding Allen’s complaint and his argument that race as a motivating factor was enough to prevent its dismissal.

Erwin Chemerinsky, attorney for Allen and the dean at the University of California, Berkeley, School of Law, warned that requiring Allen to prove that race was the single factor in Comcast’s decision before moving into trial was not the intention of the original statute.

“We live in a world of multiple causes,” said Chemerinsky. “When you think of Congress’s broad remedial purposes in 1866, there is no doubt that Congress wanted then to open the door to claims with regard to race discrimination in contracting, not to close that door.”

Chemerinsky pleaded with the court to rule in favor of Allen, highlighting that the complaint needed the chance to move forward.

“I think all this court needs to say, then, is that the 9th Circuit is correct in saying that at the pleading stage, motivating factor is sufficient,” maintained Chemerinsky.

Outside the court, Greg Hirsch, a supporter of Allen, said the case wasn’t only about race.

Sandra Tedford, another Allen supporter, said that Allen’s case is important for economic equity for African Americans. In recent years, Allen has added to his holdings by acquiring The Weather Channel and becoming a partner in the Sinclair Broadcast Group’s $9.6 billion acquisition of the Fox regional sports networks

“I think a lot of African-Americans need to be made aware of the difference between black aspiration and black ownership […] Byron Allen is showing us that it is important to have black ownership and what that does and what kind of power that has for us,” she said.