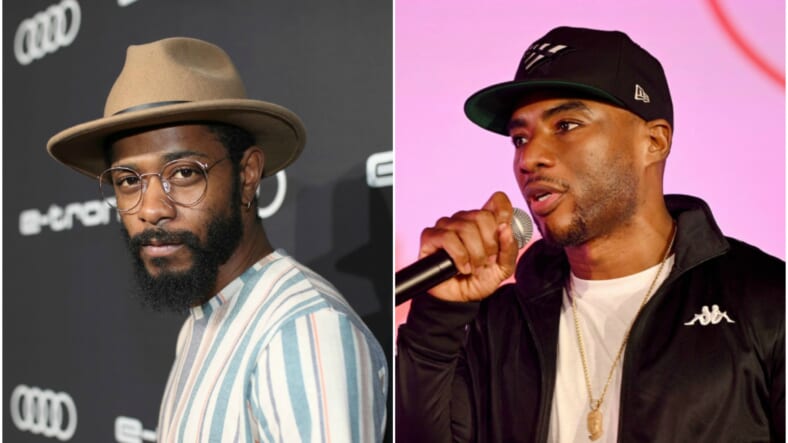 Actor Lakeith Stanfield took it upon himself to go after some of the internet’s most successful Black media sites this week, slamming many of them for “anti-Black.” Now apparently morning radio co-host Charlamagne Da God is pushing back and isn’t biting his tongue.

“It’s a fact that a lot of these platforms are usually or tend to be feeding grounds for negative reinforcement toward BLACK ‘nonconformists.’ ” Stanfield, who plays the character Darius on FX show Atlanta wrote on Instagram  Wednesday.

“They bolster faux vanity and hold a white supremacists scope over Black men and women often highlighting negative attributes and downplaying mind expanding ones,” he continued. “They serve as bottomless coward consumption pits and digital, audio, or otherwise slave mentality museums. @ all you want”

The caption accompanies a picture of text that accuses websites The Shade Room, Lipstick Alley, WorldStarHipHop, and Charlamagne’s show The Breakfast Club specifically of being “anti-Black.”

But Charlamagne, who hosts the New York-based syndicated morning show with DJ Envy and Angela Yee, clapped back with a quickness on the actor.

“You can say any and everything about me. I’ve damn near heard it all about myself online. But what you won’t do is ever fix your lips to call one of my platforms, especially The Breakfast Club, anti-Black,” said Charlamagne. “There is not another show out there that goes from [theGrio parent company Entertainment Studios CEO] Byron Allen to Blac Youngsta like it’s nothing.

READ MORE: How ‘Atlanta’ episode about Darius connects with ‘Get Out’ and why our writer may never sleep again

“We’ve made plenty of mistakes on this radio [show], plenty of things I’ve looked back on and said ‘yeah, we should have played that a certain way, and all that critique is fine,” he continued. “But Lakeith Stanfield, don’t you ever fix your raggedy a** mouth to call the author of Black Privilege…anti-Black.”

Charlamagne continued to criticize Stanfield by bringing up an apology he made after rap lyrics he freestyled in an Instagram video that were criticized as homophobic, as well as accusing him of not calling out mainstream media platforms because he’s afraid of blowback from his handlers and Hollywood in general, and even said he bypasses Black outlets at red carpet events to speak with larger outlets like E! and PEOPLE.

But Stanfield, 28, who has also had breakout roles in Jordan Peele’s Get Out, N.W.A. biopic Straight Outta Compton, Ava DuVernay’s Selma and Boots Riley’s Sorry to Bother You, also enjoyed a chorus of support from his peers in entertainment.

Several actors and creatives spoke up in the post’s comments section, many appearing to be in agreement with him.

Algee Smith from HBO’s Euphoria wrote a simple, “thank you” under the post which was liked by others such as singer Miguel.

“When they do have forward thinking or progressive guests they tend to make them feel like weirdos or poke fun at their views,” wrote artist Gianni Lee. “Most of the time they never get the platform to begin with. Many of the content they spew does not do a good job of showing the full spectrum of blackness and leaves a lot of us “weirdos” under-represented. We just choose not to say anything because we’ll be called haters.”