‘Sorry to Bother You’ is the trippy, super weird, satirical comedy the world needs right now

Demetria Irwin   |
Sorry to Bother You

Weird. Trippy. WTF did I just watch? Those are likely the first thoughts of anyone leaving the theater after seeing Sorry to Bother You, Boots Riley’s directorial debut.

Set in an alternate reality, modern-day Oakland, CA, Sorry to Bother You stars the tremendously talented Lakeith Stanfield bringing all his lanky, left of center charm that makes him a fan favorite on Atlanta.

Stanfield is Cassius Green, a hapless young man trying to make his way in the world. He drives a car that runs on hope and the occasional 40 cents worth of gas when he scrapes together enough change. Cassius is also several months behind on rent, which is why we find him in the opening scene desperately trying to sell himself in an interview for a telemarketing firm gig.

READ MORE: Will Smith and his mom celebrate Philadelphia mural

He goes so far to try to impress his potential boss that he falsifies his resume, has an employee-of-the-month plaque made of himself for a company he never worked for, and for good measure even brings in a comically large high school trophy.  The hiring manager calls Cassius out on his obvious bs, but hires him anyway because according to him you don’t need talent to be a telemarketer and at least Cassius shows initiative.

It’s a hilarious, off-putting scene that perfectly sets the tone for the film.

The first calls Cassius makes are awkward and painful (but funny) to watch. Always starting off with “Sorry to bother you,” Cassius fumbles his way through the script as the viewing audience is treated to seeing him and his whole cubicle literally drop into the lives of his marks/customers. Bathrooms, bedrooms, kitchens—no place or moment is sacred in the world of telemarketing.

Cassius is terrible at his job until his co-worker Langston (Danny Glover) advises him to use his “white voice” while cold-calling. That proves to be the game changer.  Once Cassius perfects his white voice (provided by David Cross), he is unstoppable. He’s becomes a superstar and quickly moves on to the ranks of being a “power caller.”

Power callers are the big shots who work upstairs from the dank basement dwelling regular telemarketers. The power callers, headed by a one-eyed Omari Hardwick, make a lot of money (enough for Cassius to upgrade from living in his uncle’s garage to a sun-splashed, swanky apartment) and they always use their white voices, even when talking to each other.

It’s at this point that Cassius becomes more acquainted with Steve Lift (Armie Hammer), the CEO of WorryFree—which is a company that “offers” free food and lodging in exchange for lifelong servitude. It’s basically a giant private prison that operates under the guise of free will/market even though it is crushing debt and desperation that makes people agree to such contracts in the first place.

Now tied up in the WorryFree business as a power caller, Cassius has big decisions to make that seem to either fill his soul or fill his pockets, but not both at the same time.

Riley’s presentation of important issues like code-switching, the prison industrial complex, and the plight of the working poor is very much a reflection of today’s times, but perhaps a reflection from a fun house mirror.

The ever-moving, colorful visuals never allow the viewer to get completely comfortable because a wall might become a door (that opens) or a cubicle in California might appear on a lawn in Iowa. There is no sure-footing and it’s a masterful narrative addition by Riley.

Speaking of narratives, Riley also helms the writing on this project and not to assume what Riley may or may not consume, but the characters, dialogue, and certain narrative elements lead one to conclude that only a very… open and liberated brain could come up with this stuff. 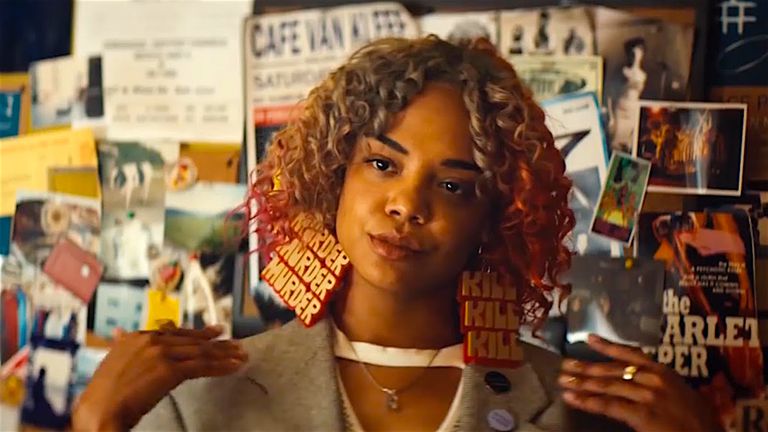 Sorry to Bother You | Tessa Thompson as Detroit

Tessa Thompson plays Detroit (her parents wanted a very American name), girlfriend of Cassius. She’s a multimedia artist who earns extra cash twirling signs.  Her hair is more likely to be pink than brunette, blue than blonde and she’s never without a big, bold pair of earrings.

Her free-spirited, self-assuredness is refreshing and a good contrast to the literally bowed shoulders of Cassius. Detroit is not the ride-or-die “rock” for him. She’s supportive of Cassius (only a true love would manually operate the windshield wipers of a dilapidated car), but she has her own goals, agendas, and life-hacks.

As an aside, Thompson has quietly been carving out a very interesting career path with a bevy of diverse roles in film and television such as Dear White People, Westworld, Creed, and Thor. She’s absolutely one to watch.

Jermaine Fowler is also a stand-out as Salvador. He definitely steals a couple scenes with his one liners and sharp humor. Stanfield is without a doubt the star though and a very capable one at that.

Sorry to Bother You is the in-your-face, raucous, intelligent, satirical comedy that the world could use right now.

Sorry to Bother You is in limited theaters July 6 and wide release July 13.