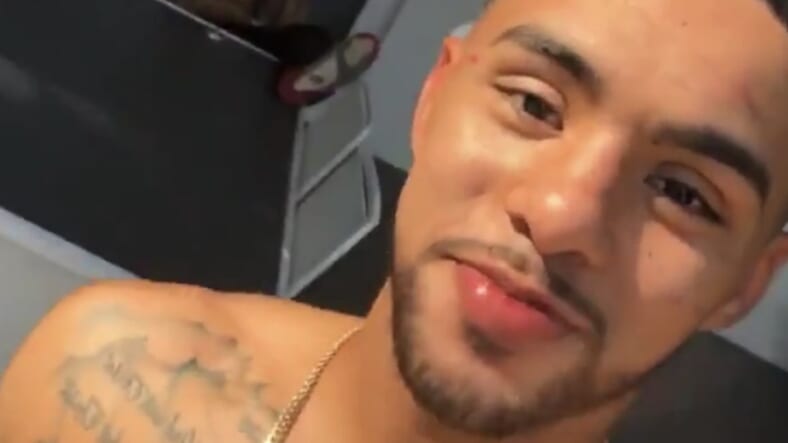 After claiming to have been jumped over the weekend, new footage shows that Brother Nature is allegedly the person who initiated the fight he was involved in at La Sandwicherie restaurant in Miami.

The restaurant released a video that supports their claims that Brother Nature, also known as Kelvin Pena, was the one who “started the entire altercation,” according to Complex.

The restaurant said the altercation was ignited after Brother Nature confronted a customer who was recording him with a female friend. In an interview with Drama Alert, the customer who goes by “D” said he recorded Brother Nature because he was acting “drunk” and “belligerent” when he arrived at the restaurant after employees announced their last call. Pena is also accused of threatened the men.

On #DramaAlert that man that beat up @BrotherNature said that “BN threaten him” now we have proof that’s true as a video Leaked proving Brother Nature said this before the fight! pic.twitter.com/LrLbHyr2lm

Pena was allegedly being disruptive in the restaurant and pulled down chairs which led to the manager asking him to leave.

Not being fond of being recorded, Brother Nature allegedly approached “D” and asked him to discard the video. He even wanted “D” to give him the phone. When “D” denied his request that’s when Pena told him to “take it outside.”

The altercation ensued outside of the restaurant where video footage posted on social media shows “D” fighting Brother Nature, according to the site.

After that stint, “D” returns back inside the restaurant and Brother Nature comes back in soon after, throwing punches at “D”s cousin.

Another video posted online shows then shows Brother Nature being kicked and food items are thrown on him.

The next day, he took to Twitter and wrote: “I know there’s a video out of me getting jumped, everyone in the pizza shop literally just watched, with their phones out, and did nothing. Oh well”

I know there’s a video out of me getting jumped, everyone in the pizza shop literally just watched, with their phones out, and did nothing. Oh well ??‍♂️

“D” someone at the restaurant told him that the fight was filed as self-defense by the police after they arrived.

This story is still developing.