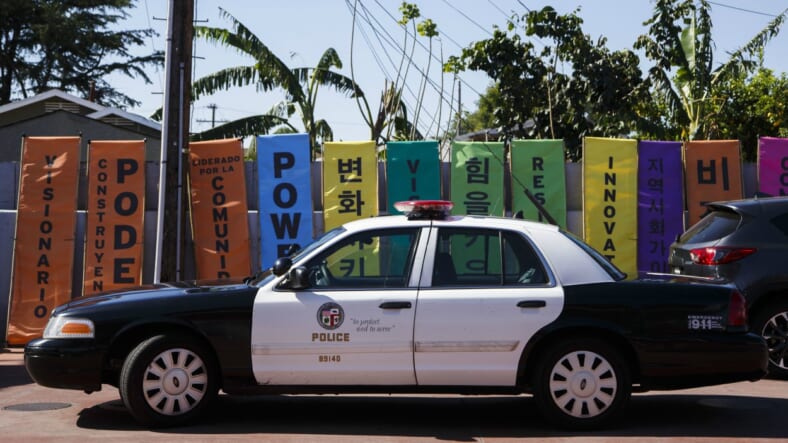 An LAPD vehicle is parked next to protest banners written in Korean and English for a peace rally to mark the 25th anniversary of the LA riots, at the intersection of Florence and Normandie, on April 29, 2017. (Photo by Warrick Page/Getty Images)

The LAPD is in hot water again after a Los Angeles Times report revealed that officers within the department’s elite Metro Division are currently under investigation for allegedly falsifying information collected during traffic stops in an attempt to misidentify innocent citizens as gang members.

The cops in question were assigned to special patrols in South Los Angeles, but in an effort to boost traffic stop statistics in the area, authorities suspect they falsified field interview cards during stops which included fabricated information about those questioned.

“An officer’s integrity must be absolute,” LAPD Chief Michel Moore explained in a statement. “There is no place in the Department for any individual who would purposely falsify information on a Department report.”

The probe was launched after the LAPD informed a San Fernando Valley resident last year that her son had been identified as a gang member. The distraught mother was confident that these allegations were false and in turn reported the inaccuracy to a supervisor at her local police station.

When the bodycam footage and other pertinent information surrounding her son’s case was reviewed it was confirmed that her worst suspicions were correct. As a result of the ongoing investigation some accused officers have already been removed from active duty. Any documentation identifying her son as a gang member was also erased.

“Over the course of several months, Internal Affairs investigators have continued their investigation resulting in identifying additional inaccuracies in the documentation on-field interview cards completed by those officers as well as others,” the LAPD said in a statement. “Given the serious nature of the alleged misconduct, all involved officers have been assigned to inactive duty or removed from the field.”