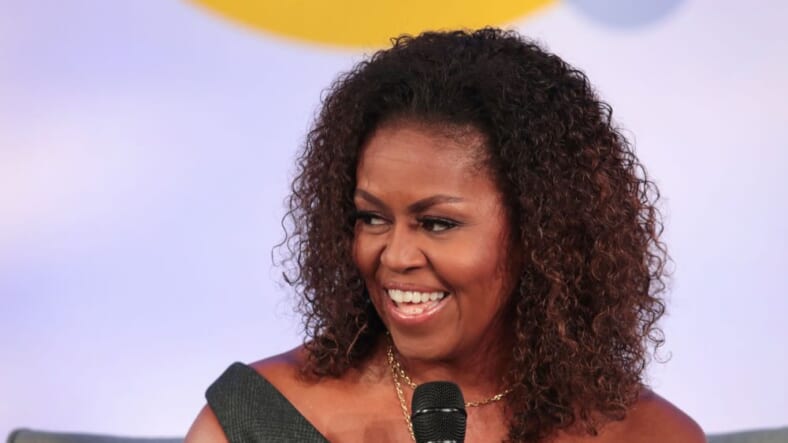 Michelle Obama is launching a new Instagram TV series that follows four college freshmen as they experience the highs and lows of university life. The purpose of the series is to offer a realistic look at what students can expect and to inspire others.

Our forever FLOTUS announced the six-part series, A Year of Firsts, on Tuesday in an IG video and in a statement. The series will debut later this month and run until June on Instagram TV. Obama’s Reach Higher initiative, which she founded as a First Lady, is producing A Year of Firsts in partnership with media company, ATTN:

In the IG video, Obama said the four students from across the country have “overcome tremendous odds to get where they are,” and are willing to share their first-year college experiences with viewers.

The first year of college is exciting, but also a little nerve-racking. As a first-generation college student myself, I know how intimidating it can be to try to navigate through a new place and make new friends, all while trying to figure out who you are and who you want to be. That’s why I’m so excited that @reachhigher is teaming up with @attndotcom to share the stories of four first-year college students: Robert, Linette, Regan, and Haseeb. Can’t wait for you all to meet them and learn more about what taking that leap really feels like, day in and day out. Stay tuned!

“As a first-generation college student myself, I know how intimidating it can be to try to navigate through a new place and make new friends, all while trying to figure out who you are and who you want to be,” said Obama in the caption.

“Throughout the year, they’ll tell us what that first year of college is really about. The ups, the downs and everything in between,” Obama said in the video. “And we’ll post everything right here on IG TV.”

Obama also released a statement adding “By sharing their stories, they’re helping others see that the ups and downs of the first year of college are something everyone goes through — and they’re creating a supportive community for others facing similar challenges,” Obama said, according to CNN.

The statement goes on to say students will “explore issues like the academic stress of college, making new friends, college affordability, and the physical and mental health while in college.”

Obama had a great year in 2019. Her memoir, Becoming, became a blockbuster bestseller, and she and Barack Obama announced a new production deal with Netflix. For 2020, word is that her husband is working on publishing a book about his presidency. This just might be the Obamas’ year (again).