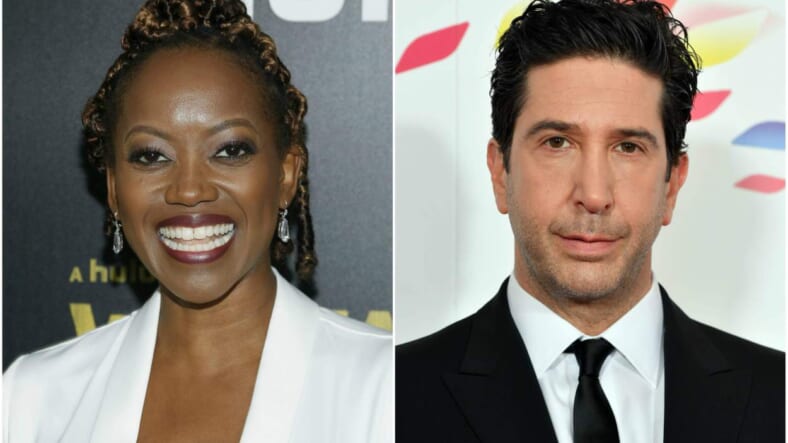 This week the well-intentioned actor David Schwimmer made the tone-deaf suggestion that his uber-successful 90’s sitcom Friends come back as an all-Black or all-Asian reboot in lieu of a reunion. Almost immediately, Black Twitter, particularly actress Erika Alexander pointed out that his show was technically already a reboot of a little all-Black show called, Living Single.

This week, in a lengthy interview with the Guardian, Schwimmer shared his feelings about the NBC sitcom that made him a household name and reflected on how its availability on Netflix has kept it relevant with a whole new generation.

But when asked about the longstanding critique about how blatantly white the series was despite being based in the melting pot of New York City, he opined, “I feel that a lot of the problem today in so many areas is that so little is taken in context,” also noting that he believed the show “groundbreaking in its time.”

“You have to look at it from the point of view of what the show was trying to do at the time. I’m the first person to say that maybe something was inappropriate or insensitive, but I feel like my barometer was pretty good at that time. I was already really attuned to social issues and issues of equality,” he continued.

Then he proposed possible some possible reboot ideas musing, “Maybe there should be an all-Black Friends or an all-Asian Friends.”

“But I was well aware of the lack of diversity and I campaigned for years to have Ross date women of color,” he pushed back. “One of the first girlfriends I had on the show was an Asian-American woman, and later I dated African American women. That was a very conscious push on my part.”

In response to what many saw as a self-aggrandizing and factually inaccurate account of his show being the first of its kind, Alexander hit up the actor directly on Twitter stating, “Hey ⁦@DavidSchwimmer ⁦@FriendsTV⁩ – r u seriously telling me you’ve never heard of #LivingSingle? We invented the template! Yr welcome bro. ;)”

Hey ⁦@DavidSchwimmer ⁦@FriendsTV⁩ – r u seriously telling me you’ve never heard of #LivingSingle? We invented the template! Yr welcome bro. 😉 David Schwimmer 2 The Guardian: “Maybe there should be an all-black Friends or an all-Asian Friends” https://t.co/r8W1ZHBwoy

The actress previously revealed during an interview with “The Breakfast Club,” that not only was “Living Single” developed years ahead of Schwimmer’s, the name “Friends” was actually originally listed as a potential name for the show as well.

“The original name for “Living Single” was “My Girls” but it didn’t test well so they came up with some other names. “Living Single” and “Friends” were some of the names presented,” she said at the time. “Obviously, they chose one and the other went to another show, also produced by Warner Bros.”

To her point, although Warner Brothers, produced both “Living Single,” and “Friends,” the latter got a much larger budget and better marketing, allowing it to gain more critical and financial success.

In 2017 Queen Latifah also addressed the decades old drama during an appearance on Watch What Happens L!ve with Andy Cohen.