Opinion: Since Kobe Bryant's tragic death, Black men have shown emotions that many forget they have. It's time to let them have their wake for the NBA legend and show that despite stereotypes, they are human 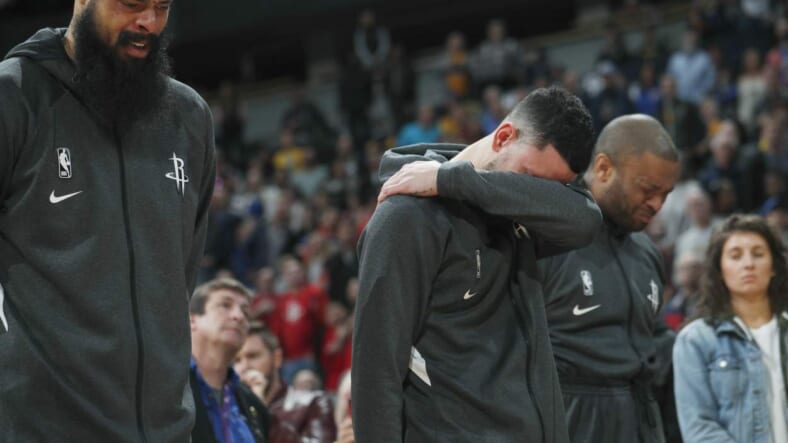 Sunday afternoon I was at the Sundance Film Festival when I looked down at my phone and realized I had about a dozen unread messages from friends and colleagues all with the same message: “KOBE IS DEAD.”

Fortunately, my friend — an avid basketball fan who I often catch watching NBA games on his phone or laptop whenever we have the audacity to invite him out during basketball season — had just stepped out of the theater to make a phone call right before I saw those texts. Which gave me time to figure out how I was going to break the news to him that his hero, Kobe Bean Bryant, was gone.

But when he walked back in two minutes later, the stunned expression on his face let me know someone else had beaten me to the punch. He looked gutted; his eyes wet with unshed tears and his usual smile replaced by a tight grimace of disbelief.

The next few hours of film festival activities were a blur. We went to a swank brunch we’d been excited to attend just that morning, but now the chatter of shiny industry folks milling about us felt meaningless, and the carefully prepared gourmet food plated before us tasted dull and almost too heavy to swallow.

I tried to distract myself by making small talk with the folks seated at our table. But every time I looked at my phone, a new detail would come out: Kobe was on the flight with his daughter Gianna when he died. They were headed to her game to speak to a crowd of excited kids. There were seven other fatalities on that flight. Making it worse, TMZ broke the news before the family was even notified.

It began to feel like a constant barrage of bad news, with each update digging the knife even deeper into our chests. Until finally, while we stood backstage waiting for a film panel to begin, my dear friend, who I always tease about not showing enough emotion, threw down his phone, and let himself cry.

As I leaned over to rub his back and console him, in my periphery I noticed three other Black men in our vicinity staring off into the distance and holding back tears of their own. That’s when it hit me that even though we were all mourning the loss of Kobe Bryant, for brothers in particular, this one hit differently.

When death is swift and cruel

As someone who has had to deal with the mourning process a lot over the last two years, it has been my lived experience that there is death… and then there is sudden death.

Both are painful, but the latter has an extra bite to it that leaves you feeling as if you’ve been betrayed by time, and also wishing you could go back and savor moments you previously took for granted.

That’s why the swift and cruel timing of Kobe Bryant’s passing, just hours after Lebron James passed him on the NBA’s all-time scoring list, felt like a sick joke. Most of us — myself included — expected Kobe to grow old in the public consciousness. For people in my age group specifically, he was the first NBA player we watched play out his entire career from start to finish and then segue into an exciting new chapter after retirement.

He was a North Star of sorts. We grew up with him and therefore, whether we realized it or not, his mortality was tied to our own, with his death feeling just as abstract and distant as we would all hope ours to be.

Kobe Bryant was a legend to the world, but to his daughter Gianna Bryant, he was so much more. pic.twitter.com/c1uawm8tpO

The Black Mamba was equal parts man and myth. As accessible as he was to several generations of sports fans, to Black men in particular, he was a flesh and blood reminder of what they could achieve and evolve into, even after making potentially life-damaging mistakes.

Let’s be real, this world and particularly this country isn’t known for giving Black men second chances, or even first ones. Since enslavement, our men have been seen as property; sexually deviant brutes with no humanity or tenderness to speak of. They’ve been portrayed as unfeeling caricatures and dismissed as emotionally unintelligent aggressors who only seek to pound their chests and assert their dominance while instilling fear in the hearts of their women and white counterparts.

And the saddest part is many of them have bought into this image of themselves. Black men are supposed to be things not people, with the only exception being made for the Ivy League, super articulate, Obama archetypes who are so perfect in their presentation that even the mainstream has to begrudgingly acknowledge their “Black Excellence.”

But then there was Kobe; flawed, focused, unrelenting Kobe.

A misstep and subsequent assault charge early in his career made the sheen of perfection an impossible distinction for him. To many, that should have been the end of his story, leaving him dismissed as yet another bad boy Black male athlete with an asterisk next to his name.

But true to that “Mamba mentality” he refused to let the biggest mistake of his life define him, and instead spent 20 years grabbing life by the neck and shaking every bit of goodness out of it he could.

Right before our eyes, we watched a tall lanky kid become a good man, in the most breathtaking sense of the word. A devoted husband, a proud “girl dad” and a tenacious and formidable athlete whose prowess on the court was only outshined by his generosity towards his teammates and fans.

For Black men, Kobe Bryant was their redemption song, their constant reminder that they could be more than whatever box society chose to put them in. He was the brother, childhood friend, and superhero they all needed to tap into when everything else on the planet conspired to tell them they weren’t good enough.

Because of this, they let themselves love him deeply, and attach themselves to him as if he was family. But that’s the tricky thing about love. Whenever you give anything (or anyone) the power to make you that happy, you’re also giving them the ability to break your heart into a million little pieces.

Black people are probably some of the proudest and most unflinching humans on the planet, and our men in particular excel at this. As a result many of us women, can go years or perhaps even a whole lifetime never seeing the brothers around us shed a tear. The side effect of this is we often end up forgetting how vulnerable — and human — they are.

But since Sunday I’ve seen men who I honestly didn’t even think had tear ducts, sobbing like little children, both in real life and on my television screens. And it’s been a bittersweet reminder about just how much “stuff” they hold in every day and teach themselves to push aside.

Shaq, we are so sorry for your loss. Still just can’t believe it. ? pic.twitter.com/k1G6muE06C

The last few days have revealed that Black men don’t feel any less than the rest of us, or hurt any less than we do either, they just have much less freedom to show it. So when I knew I was going to be writing this piece today, I asked many of them, flat out, “Why does THIS loss hurt so much?”

In summation they said they felt “blindsided” and “deeply wounded” to lose someone they identified with so intimately. One went so far as to explain that he felt society needed to “let us have this wake for Kobe. Let us play our pick-up games in his honor. Let us hug our children, kiss our wives and dap our friends. Let us cry together and surprise everyone who doesn’t think that we’re people.”

So out of respect, that’s exactly what I plan to do.

I’m going to let the Black men around me mourn, hold space for them to put down their armor and remind them it’s ok to weep for as long and as hard as they need to. Because the unexpected, but incredibly soul-stirring silver lining of this tragedy is that the men in my life are finally allowing themselves to feel and show vulnerability in ways I’m not sure even they knew they were capable of.

I’d like to think that Kobe — the older and wiser family man who planned to dedicate the rest of his life to uplifting his community, would be proud to know that this too gets to be part of his amazing and complicated legacy.