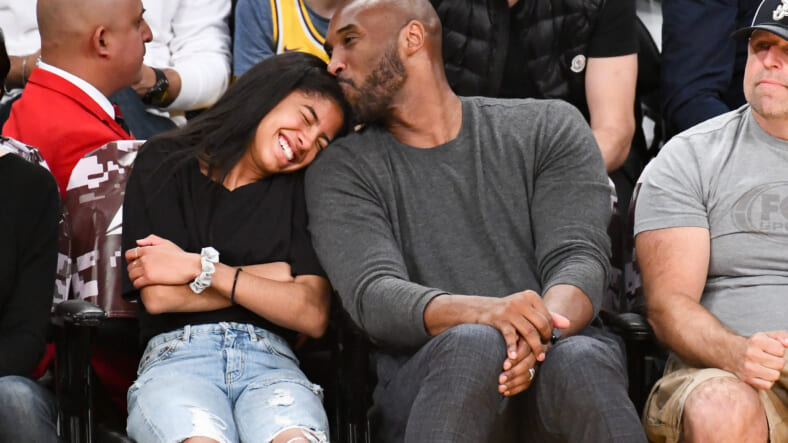 As Kobe Bryant fans grapple to make sense of his tragic death, a viral SportsCenter clip highlighting the NBA legend’s pride about being the father of girls has prompted men all over social media to get the hashtag #GirlDad trending as they post their own father-daughter pictures in honor of Bryant and his 13-year-old daughter Gianna.

During a Monday evening broadcast, ESPN anchor Elle Duncan shared a personal story about the first time she met Bryant back in 2018. Duncan, who at the time was was eight months pregnant when she approached Bryant backstage at an ESPN event, reminisced on the future Hall of Famer’s gleeful reaction to her baby bump.

“How are you? How close are you? What are you having?” she recalled Bryant asking, to which she replied, “I’m having a girl.”

In response, he immediately gave her a high five and said, “girls are the best.”

“I asked him for advice on raising girls… and he said, ‘Just be grateful that you’ve been given that gift because girls are amazing,'” she continued.

When Duncan asked Bryant, who was only a father to three at the time if he wanted more children, he shared that his wife Vanessa really wanted to try again but for a boy and thought she might end up having another girl.

“And I was like, ‘four girls, are you joking? What would you think? How would you feel?’ Without hesitation, he said ‘I would have five more girls if I could. I’m a girl dad.’ ”

"I would have 5 more girls if I could. I'm a girl dad."@elleduncanESPN's story about how much Kobe loved his daughters is something special. pic.twitter.com/1KJx17QRjY

The clip of that beautiful but heart-wrenching memory shared by Duncan quickly went viral and inspired #girldad to begin trending almost immediately.

“I’m so proud and lucky to be a #GirlDad,” former MLB player Alex Rodriguez tweeted.

Soon other girl dads and daughters who loved their own proud fathers started sharing memories on different social media platforms.

“My dad was a man built for sons but ended up with daughters,” actress Gabrielle Union posted on Instagram. “Thank you to everyone who was just being involved parents and adults who loved kids.”

READ MORE: The Academy Awards plan to do a special tribute for Kobe Bryant

Won’t change It For The World? #girldad pic.twitter.com/LnayYnpe8G

What being a #GirlDad means to @saquon pic.twitter.com/UUdiX80T2D