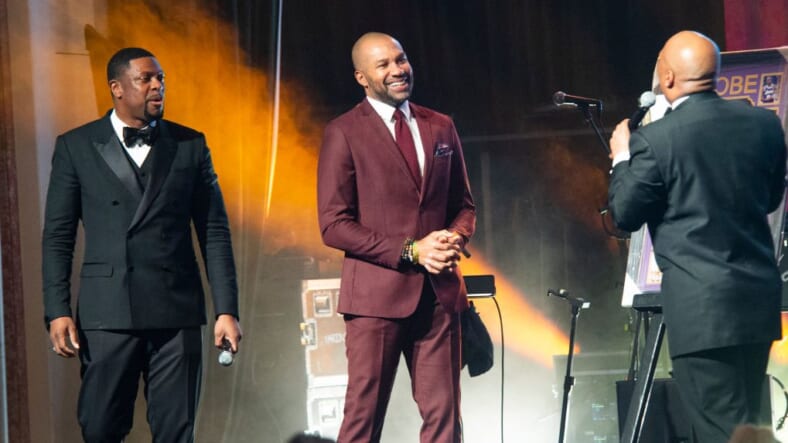 There’s nothing like the movies to bring together people from all walks of life and all facets of entertainment. Byron Allen’s 4th Annual Oscars Gala did just that as celebrities from film, TV, and sort descended upon The Beverly Wilshire Hotel on Sunday.

Los Angeles Sparks basketball coach and former Los Angeles Laker Derek Fisher was in attendance and stopped by to talk to theGrio about Oscars and Kobe Bryant.

“I think it’s important even when you think who would you give the Oscar to, taking the category [into consideration], Kobe was doing a lot for young women and young girls. I’m coaching WNBA, [I’d give an Oscar to] Little Women. I’m biased,” Fisher said before discussing Kobe’s legacy.

“Kobe was a very passionate and impactful human being, a lot of artists like Chris [Tucker], a lot of people you’ll see here tonight… when you do what you love to do with so much passion, that’s why he touched us so m much and I’m just going to try and do more, to live even more passionately, work even harder, ‘cause I know that’s what he would want us to do.”

Bryant, his daughter Gianna, and seven other people (including Altobelli Family) died in a helicopter crash on January 26 in Calabasas. Bryant was on his way to coach at his basketball camp for young girls.

Chris Tucker chimed in on why it was important he and Fisher attended the annual Oscar Gala benefitting Children’s Hospital Of Los Angeles.

“It’s always good to be part of something a great foundation like this, a great organization like this, and Byron Allen of course. A good friend of mine and I’m pretty sure yours too,” he said.

The Entertainment Studios 4th Annual Oscar Gala included a charity auction that raised $1.5 million for the Children’s Hospital Los Angeles. Guests were treated to a private performance by Maroon 5.