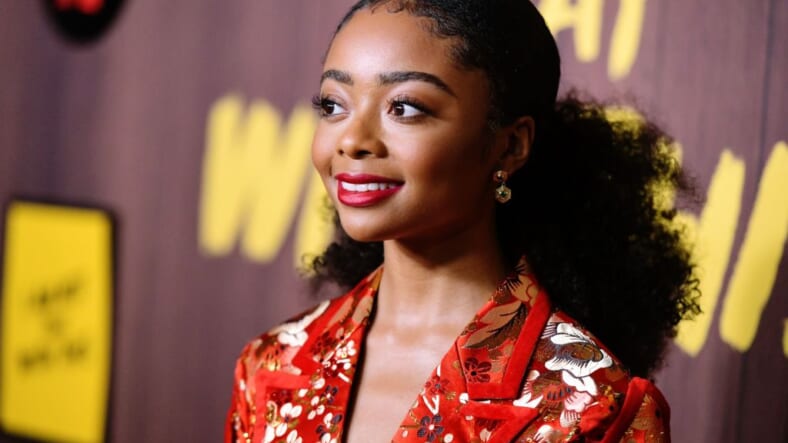 WEST HOLLYWOOD, CALIFORNIA – FEBRUARY 25: Skai Jackson attends the premiere of Netflix’s “I Am Not Okay With This” at The London West Hollywood. (Photo by Charley Gallay/Getty Images for Netflix)

Skai Jackson of Disney Channel fame was granted a temporary restraining order against Danielle “Bhad Bhabie” Bregoli, over death threats the white rapper made against Jackson on social media.

Jackson, 17, yesterday was granted the order in Los Angeles Superior Court that requires Bhad Bhabie, 16, stay at least 100 feet away from the actress, according to a PEOPLE, who obtained a copy of the order. Bregoli is also forbidden to contact Jackson on social media or in any other way.

The court set a March 20 hearing on the matter.

Bhad Bhabie reportedly has had problems with the Jesse actress for a minute, even accusing Jackson of getting friendly with guys that she likes, according to Yahoo. This week, the rapper went on Instagram live to air her issues with Jackson before she outright threatened the teen star.

“I wanna know why every time I’m seen with a dude, b**ches wanna get all up on they page?” Brigoli said on Instagram Live. “The b**ch is a huge fan! You’re a whole fan! She’s moving sneaky bro! Don’t go post about me on your fake page, b**ch. If you got something to say about me, post it on your page. Show me you f**king bold!”

Then the rapper made threats against Jackson’s life.

“I’m finna go to jail behind a Disney thot,” she warned. “B**ch, what are you even doing in these men’s DMs? … Like you just trying to get me mad at this point. I see what you’re doing, and it’s going to get you killed. Like, that’s the thing: I’m gonna f**kin’ kill you. Don’t post your location…because I’m coming.”

After Jackson received the temporary restraining order, Bregoli went on Instagram to rant about “fake hollywood” and said she doesn’t apologize for keeping it real.

“you can try to hate me for responding to bulls- with more bulls- but that’s just who I am and I don’t apologize for none of it,” Bregoli wrote.

“I been in this fake a—hollywood world for 3 ½ years now and I’ve done A LOT when the whole world said I couldn’t, but I refuse to become as fake as hollywood is,” she continued, sharing a photo of her records. “Y’all can play around on your finstas but I’ll always say what’s on my mind as cuz that’s who I am. Go get your restraining order, Imma go get checks.”

Jackson told the court yesterday that she and Bregoli were once friends, but that the rapper had started harassing her and has made her “fearful” and to lose sleep, PEOPLE reported.

Jackson brought along Instagram messages to support her request for a restraining order. In direct messages, Bregoli tells Jackson that she better hide because she’s coming after her. “You funny imma get to you don’t worry,” Bregoli reportedly said in the conversation, according to PEOPLE. “Oh god you better hide I find everyone Yk me I pull up to studios houses all that s—.”

“You really tripping about something I didn’t do… you know people stay starting stuff when it’s not even true right?” Jackson countered. “I’m good over here, and worried about my own self… no one said anything about you. I would love to see the DMs they said I posted. That’s false.”

“Shut your scary a— up,” Bregoli responded. “Imma get to you. Hide that’s all imma tell you HIDE.”

Another message from Bregoli to Jackson read: “I’mma beat you like a dude when I see you.”