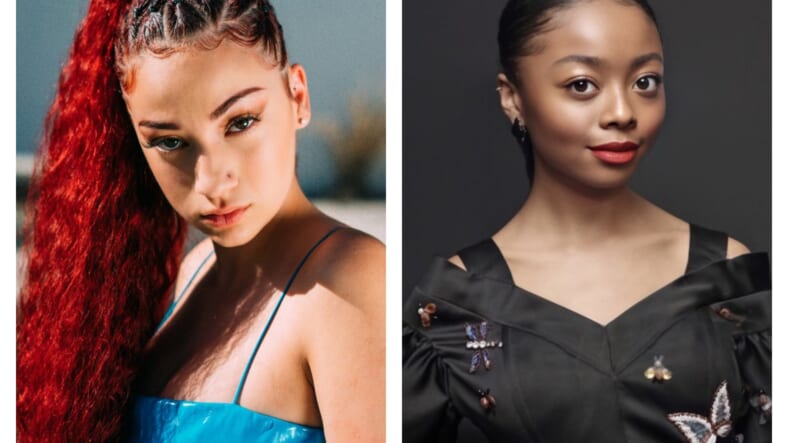 White rapper Bhad Bhabie, who is most notably known for her viral “Catch me outside! How bout dat?” moment on Dr. Phil, is feuding with Skai Jackson. The rapper has even gone as far as to threaten to kill the young actress during a disturbing social media rant.

According to Yahoo,  Bhad Bhabie (AKA Danielle Brigoli), has had an issue with Jackson for a while because she believes the 17-year-old has a penchant for flirting with guys she’s been spotted with. Their beef came to head this week after Brigoli went on Instagram live and started making threats against a “Disney thot.”

“I wanna know why every time I’m seen with a dude, b**ches wanna get all up on they page?” Brigoli said on Instagram Live. “The b**ch is a huge fan! You’re a whole fan! She’s moving sneaky bro! Don’t go post about me on your fake page, b**ch. If you got something to say about me, post it on your page. Show me you f**king bold!”

The 16-year-old entertainer became increasingly worked up and stunned viewers when she then started making threats against Jackson’s life.

“I’m finna go to jail behind a Disney thot,” she warned. “B**ch, what are you even doing in these men’s DMs? … Like you just trying to get me mad at this point. I see what you’re doing, and it’s going to get you killed. Like, that’s the thing: I’m gonna f**kin’ kill you. Don’t post your location…because I’m coming.”

Jackson seemingly responded and chose to keep it classy by tweeting out an impressive list of all the projects she’s currently working on, ending it with a message that she has “no time 4 negatives!”

Despite this attempt to diffuse the argument, Bregoli’s mother Barbara entered the fray by posting screenshots of her exchanges with Kiya Cole, Jackson’s mom, on Instagram. Cole made it clear in no uncertain terms that she didn’t take threats against her child lightly and that if they continued, both Bregoli and her mother would have her to contend with.

Eventually, Cole disengaged, writing on Instagram, “Had to reel myself back in and not lose track of all the great work I’ve been doing these past few months. At the end of the day, I’m still human.”