Juvenile performs ‘Back That Azz Up’ at Tom Steyer rally 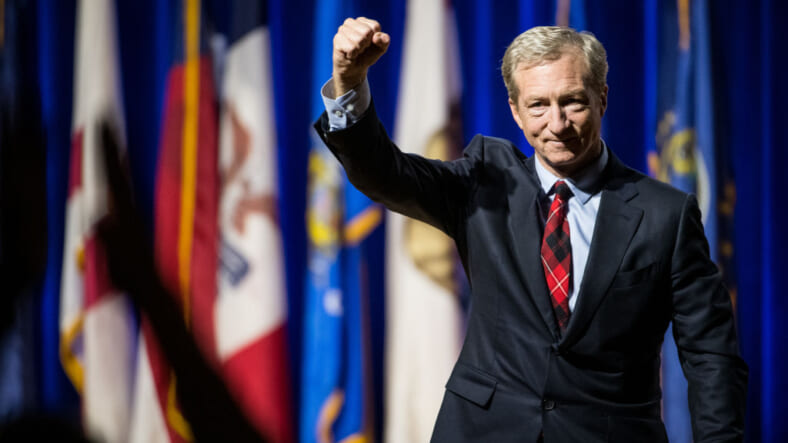 Presidential candidate Tom Steyer is trending and it has nothing to do with his political views.

The billionaire Democrat ended his South Carolina campaign Friday night by turning up with rapper, Juvenile on stage to the 1999 hit song, “Back That Azz Up,” according to the Daily Mail.

READ MORE: Top 5 Democratic Debate Moments: The good, the bad, and the Bloomberg

Watch Tom Steyer dance to Juvenile’s “Back That Azz Up” performance at South Carolina rally https://t.co/yMuNANGpB3

Steyer visited Allen University, a Historically Black College in Columbia, to rally people to vote during the South Carolina presidential primary on Saturday. He brought along gospel singer, Yolanda Adams, and Juvenile to perform for attendees. It turns out the event ended on a high note.

Juvenile was originally set to perform earlier in the night, but plans were derailed when the venue came across audio issues.

“Juvie’s comin’ back out! We’re gonna let Yolanda Adams come out and then we’re coming back to shut this bitch down for y’all!” Juvenile’s hype man told the crowd as they were waiting, according to BuzzFeed.

When Juvenile finally took the stage, he brought Steyer out to join him. That’s when the politician took the mic and performed his best dance moves in front of the crowd. Based on the videos, it looks like they were definitely entertained.

On a more serious note, Steyer spoke in front of attendees about racial injustice and other issues during his 11-minute speech during the event.

Steyer revealed this week that he needs to rank top three in the red state to maintain his candidacy in the presidential race, according to the Washington Examiner. He added, “I think I have done best with black people. I have done best with Latinos. I think that, when we get to the diverse Democratic electorate, when we get to the diversity that is America and the Democratic Party, I do a lot better.”

Steyer certainly appeared to win over the crowd, and maybe even a few votes.