Top 5 Democratic Debate Moments: The good, the bad, and the Bloomberg 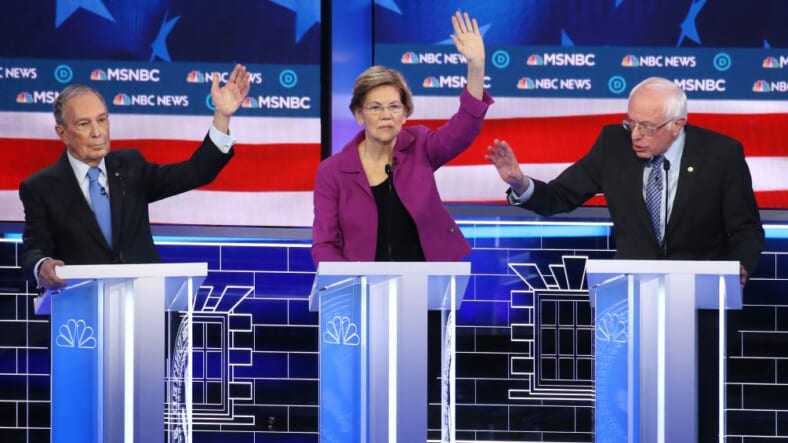 Wednesday night marked the third Democratic Presidential Debate of 2020, and the last one before the Nevada caucus on Feb. 22, which we can only hope is much less of a bubbling shit show than the Iowa caucus. Any avowed Democrat invested in the current state of affairs who doesn’t want to stick a fork in the closest electrical socket, I salute you.

With Andrew Yang dropping out of the race early this month and taking any dash of color with him, the current list of candidates with any shot at the nomination resembles someone’s parole board: Vermont Sen. Bernie Sanders, the front runner; Pete Buttigieg, Minnesota Sen. Amy Klobuchar, Joe Biden, Massachusetts Sen. Elizabeth Warren and Michael Bloomberg. (Hawaii Rep. Tulsi Gabbard and Tom “Who?” Steyer didn’t make the cut for the debate.)

The most alarming news ahead of Wednesday’s debate was that Bloomberg, former New York City mayor, qualified for it. Having entered the race just before Thanksgiving (read: late as f—k), he drew upon his own ungodly wealth to secure himself a mind-boggling shot in Hell of securing the nomination: Some polls had him going into the debate polling second to Sanders. A distant second, but still.

We’re talking about a man who was caught on video and audio defending New York’s infamous Stop and Frisk program that he inherited from Trump superfan Rudy Giuliani. A man who said, publicly and with the confidence of someone who will never have to worry about losing a job, that the NYPD is bothering too many white folks and need to stick to harassing those pesky coloreds. Whether or not he’s the lesser of evils to Donald Trump is subjective, but I’m not sure what to say to folks who don’t want to do everything they can to keep him from the nomination.

Wednesday’s debate had its share of meme-able moments; as usual, the moderators were treated by the candidates like LaTavia and LeToya from the O.G. Destiny’s Child in the interest of getting their messages across by any means necessary. Here are the top five moments from the evening:

Sanders comes after Buttigieg for his rich contributors

In gunning for Trump, several of the Democratic hopefuls have moved as far left as possible, which means less influence from private dollars is the righteous way to go. Buttigieg is obviously disabused of the idea that capitalism is bad, as is evidenced by the metric ass-ton of billionaires supporting his campaign. As Sanders is the establishment #NoBillionaires candidate, it made Buttigieg an easy target for his crosshairs.

MAYBE IT’S TIME FOR THE WORKING CLASS OF THIS COUNTRY TO HAVE A LITTLE BIT OF POWER IN WASHINGTON RATHER THAN PETE’S BILLIONAIRE CAMPAIGN CONTRIBUTORS! – BERNIE SANDERS #DemDebate pic.twitter.com/3KGL2xtgJw

It’s obvious when this political shit gets a bit personal. Klobuchar was having no parts of Buttigieg on Wednesday, as they locked horns when he questioned her level of experience. She accused Buttigieg of mansplaining to her: “Are you trying to say that I’m dumb?” In the same riposte, Klobuchar hit him with, “I wish everyone was as perfect as you, Pete…” Short of every other candidate getting rocked with a child sex scandal, Klobuchar doesn’t stand a chance in Hell at the nomination, so she should just stop wasting everyone’s money and meet Mayor Pete in the student parking lot after 3 p.m.

Klobuchar waiting for Mayor Pete after the debate. pic.twitter.com/Vm0bVxGNSd

Bernie explains Democratic socialism to you

I would imagine Sanders is a touch tired of getting called a communist, which is an easy attack for low-information motherf—-s attempting to liken him to Josef Stalin or Fidel Castro. When Bloomberg dissed Sanders’ brand of democratic socialism as communism, Old Man Bernie came with the scholarly clapback, explaining the difference between socialism for the rich and rugged individualism for the poor. It’s best not to play with this man on a playground he helped build.

The media tries to dunk on Bernie with the word socialism – what happens next, single handedly ends the debate in Bernie’s favor…

Uncle Joe is not in a good way, mainly because he’s polling far behind Sanders and very close to Bloomberg, who has been in the race a far shorter amount of time. Biden was damn near a non-entity during the debate – the only real attention he received was when the Refugee and Immigrant Center for Education and Legal Services (RAICES) interrupted his closing statement for about 30 seconds, yelling at him about the deportation of undocumented immigrants under President Barack Obama. Which, when you think about it, is tantamount to a child getting yelled at for something her mama did.

BREAKING: We are interrupting @JoeBiden at the #DemDebate chanting #DontLookAway and #NoKidsInCages. We need a Democratic candidate to adopt the #MigrantJusticePlatform and commit themselves to improve the lives of migrants and refugees! https://t.co/AfnRR2QxcS

Warren went for every drop of Bloomberg blood

Warren is well aware that her campaign is in desperate need of momentum. So, she did what anyone would do with their back up against the wall: go for broke: Warren apparently had more to say on Wednesday than any of the other candidates. She shocked everyone by waiting less time than your average Drake track after the debate began to come for Bloomberg’s neck. It’s easily the most memorable moment of the night, and if you hit the bathroom at the start of the debate, you might’ve missed it.

Warren broke out all six Infinity Stones and went in on Bloomberg’s ass quick-fast like Ramadan. Most importantly, she reminded us all that a competition between Trump and Bloomberg in November would mean that, no matter the results, women would be the losers.

This is not just a question of Mike Bloomberg’s character—it’s a question about electability. We’re not going to beat Donald Trump with a man who silences women with who knows how many nondisclosure agreements. #DemDebate pic.twitter.com/ozPFghxU8s