Phillip Agnew called the former FLOTUS 'odd looking' and that he just couldn't find the beauty in her from any angle. 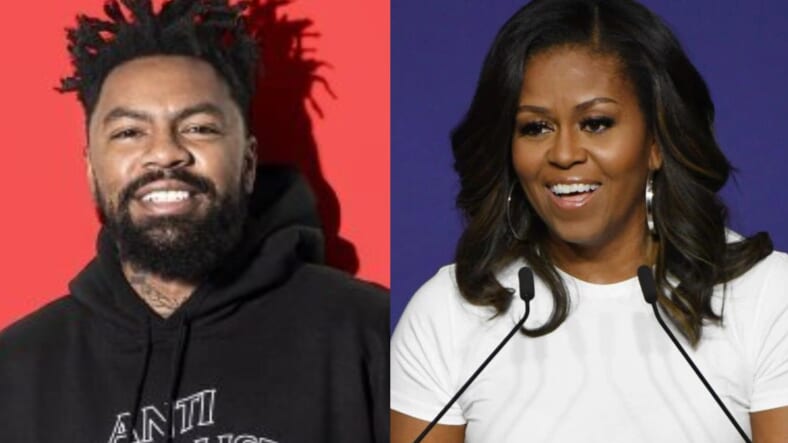 According to Newsweek, civil rights activist Phillip Agnew was hired by the Sanders campaign to help strengthen support within the Black community in key states like Michigan and Florida Saturday.

A press release from the campaign also lauds Agnew for being an influential youth organizer and co-founder of the Dream Defenders. It is a group that was launched in the wake of Trayvon Martin‘s death.

“I am excited to welcome Phillip to our team,” Sanders said. “He is a gifted organizer and one of his generation’s most critical voices on issues of race and inequity. He has and will continue to push me and this movement to deliver on what is owed to Black people who have yet to experience reciprocity in this country.”

But just hours after the announcement, Agnew found himself issuing an apology due to  numerous questionable tweets. Specifically, there was a thread where he repeatedly muses about how unattractive Mrs. Obama looks.

“Random thought while standing in Gas Station: Michelle Obama is an odd looking woman… I’d call her ugly but I don’t want the backlash…,” he wrote in 2009.

“Michelle Obama is just not pretty…I’ve tried to look at her from every angle possible,” he tweeted in another post.

I see Bernie's new outreach to African-American and mainstream Democrats is off to a great start. pic.twitter.com/D6ibxoB8Jq

“I am not my tweets from 2009,” Agnew wrote in his statement over the weekend.

“I am writing to own that in 2009, when I was 23, I tweeted stupid comments about Michelle Obama. I am writing because I was wrong and I am writing to be accountable. I am sorry for the remarks that I made. I typed them as a young, immature, and insecure boy who thought he was forever invisible and ‘invincible.’ My comments were shallow, careless, sexist and cruel.”

He added that time has allowed him to mature.

“As a young community organizer, I have spent hours, days, months and years doing, thinking and being better, privately and publicly. I’ve matured, been politicized, and continuously been pushed and challenged by my fellow organizers to change and grow into my values,” he said.

The Sanders campaign has dealt with allegations of misogyny in the past, with one extremist sect going by the name “Bernie Bros”. Some have speculated that Agnew’s sentiments just underline that critique about a perceived blindspot.

still, words have power to heal & to harm and i acknowledge and apologize for when my words harm.

i've spent years speaking life and love into my community but i was wrong and i have to be accountable.

please take a minute to read my statement: pic.twitter.com/RCuFUyAr7W