OPINION: The Democratic socialist loves this country and sincerely wants to shake things up to help those less fortunate. However, Bernie Bros are real because some of his folks are wilding out 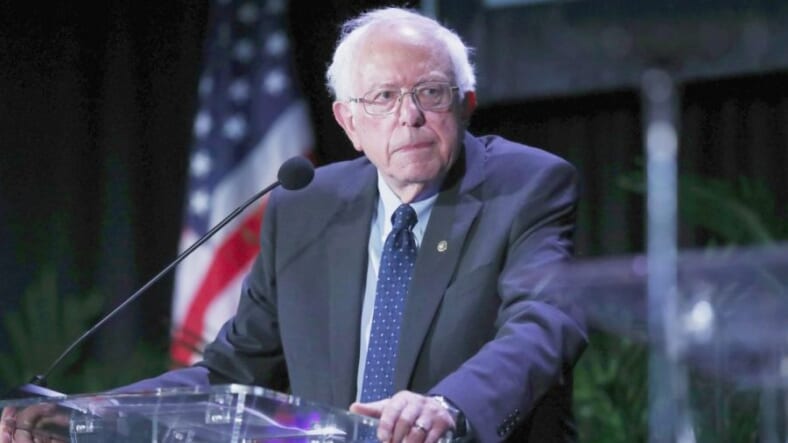 During an appearance at the Second Step Presidential Justice Forum at HBCU Benedict College, a Black student asked Sanders what advice he would offer him on encounters with police, if he was Sanders' son. (AP Photo/Brynn Anderson)

This past week, Bernie Sanders‘ campaign got an undeniable boost after he won the caucuses in Nevada.  It made him the first candidate (from either party) to win the popular vote in all three early states in a competitive primary.

While many found this inspiring, in response to his message, filmmaker Ava DuVernay wrote, “I’m undecided. But I know this isn’t what I want.”

“People on here getting emotional about one man without keeping their eye on the real ball,” she elaborated after receiving dismayed messages from Sanders supporters.

I personally watched all this happen in real-time. Soon, what was just a regular debate amongst people who all agreed Trump needed to be run out of office turned into an ugly and at times deeply disheartening attack on DuVernay’s character.

When I chimed in that this sort of overzealous approach was off-putting and dangerously close to the problematic behavior of the “Bernie Bros” – a sub-sect of Sanders fanatics who do a disservice to the rest of his supporters by using misogyny and racism as a tactic – suddenly I became a target as well. Simply for pointing out (as I usually do) that I find it hard to stand in allegiance with those who think you have to drag people during disagreements.

Over the next 48 hours, DuVernay allegedly received threats to her safety that my cohorts and I quickly reported and then blocked for our own peace of mind. I was repeatedly disheartened by the way people justified their bad behavior.

The fact that @ava has to put up with death threats & targeted harassment by Bernie Sanders supporters should disgusted EVERYONE… I’ve seen this happen to too many people of color (especially WOC) and it needs to be called out.. https://t.co/hkGFKzuMAH

Bernie Sanders loves this country and sincerely wants to shake things up to help those less fortunate. I believe that wholeheartedly based on his decades of service to this country and communities of color. But those supporters that I ran into last weekend called me a “b*tch” more times than I can count even though I kept my cool the entire time. THEY are something else.

So it begs the question: after four years of condemning Trump supporters for acting as if their candidate is above reproach and chastising them for their inability to take criticism without going ape-sh*t, HOW on earth did that same nastiness end up seeping onto the other side?

And more importantly, how do we stop ourselves from becoming mirror images of the very thing we all claim to be against?

Bernie Bros, Russians and everything in between

When I mentioned my Twitter run-in to friends, many of them, particularly those of them who work in media, noted that they had similar experiences: not just online but at dinner parties and other gatherings.

Listening to their accounts made me reflect and then admit that yes – on more than one occasion, I too had found myself making small talk with an extra passionate Sanders supporter and watched a wave of deep irritation flash across their face when I voiced questions or concerns about the campaign.

Initially, I brushed this off but over the years have come across several Bernie fans in my orb who I now don’t talk politics with anymore. This is not because I don’t want to hear their input but more so due to the growing intolerance that they’ve exhibited towards anyone who isn’t “feeling the Bern!” yet.

And no one phrase makes that intolerance rear its ugly head faster than “Bernie Bros.”

In fact, me invoking their name on Saturday is most likely why all those angry people on Twitter blew up my notifications. Their overwhelming consensus was that “Bernie Bros” don’t exist; they are merely a “narrative” that has been created to thwart the campaign and anyone who dares bring them up must be a Russian bot.

I can assure you that I am not a bot. But there does appear to be two major themes at play here.

On one hand, yes, there are definitely those who seek to undermine the Sanders campaign, and we’ve known for years that Russia (and God knows who else) has waged cyber warfare on our country’s election process in an effort to disrupt our democracy. That is a matter of public record at this point and I would never pretend otherwise.

On the other hand, there are is a subgroup of Sanders supporters who believe that he is the only person who can save us, are convinced that anyone who isn’t with him is automatically the enemy and have zero bandwidth to ever acknowledge places where he may have blind spots. The worst of this subgroup is what people now call Bernie Bros.

Now, is it possible for these two realities to co-exist as individual issues? Of course. But unfortunately, more times than not, they seem to get conflated as being one and the same. This is perhaps why every time I ask a Sanders supporter how they feel about Bernie Bros or just overzealous devotees in general, the answer is repeatedly, “Russian bots! GOP! It’s a conspiracy!”

While those issues are valid, when Susan from Philadelphia who has a social media page dating back a decade – complete with pictures of her kids, her husband, and her dog –  decides to tweet me on a Sunday afternoon, “STFU, you stupid b*tch,” just because I voiced a concern – that’s not Russia.

Can we all agree that the Susan’s of the world, along with all those people I now avoid getting “too deep” with about politics for fear of getting cussed out, are NOT Russia? Because it’s physically impossible to address this problem while so many of you are refusing to admit it even exists.

Black & Brown folks, get yo’ cousins

I can already hear some of you now, “But Blue, as long as Bernie beats Trump, why does it matter if his supporters talk to you crazy? Isn’t a win enough? And how is it his fault that his folks are wilding out?”

To answer that question succinctly, actually yes, it does matter.

For the record, most of the people I saw acting a fool towards me or Ava DuVernay during last week’s online Bernie debate were not people of color. And I point this out because we all know that racist white liberals are real and bold AF.

But to all the people of color who love Bernie, I implore you to keep the rest of your cohorts accountable. Because if we get to a place where his campaign allows that sort of behavior to keep growing, at some point, you will be next. Problematic white people who are left unchecked just become even more problematic. All you have to do is crack open a history book and confirm this for yourself.

Also, it absolutely matters how Sanders manages his supporters. We’ve seen time and time again that how a candidate runs a campaign is almost always a glimpse into how he (and hopefully someday she) will run the country. So, if he can’t effectively mitigate the damage caused by the Bernie Bros or anyone else in his ranks, it’s 100% relevant to be concerned about that.

And lastly, let’s discuss this concept of “winning by any means necessary.”

As I alluded to previously, in 2016, Bernard Sanders was robbed. He was robbed by the Russians, the GOP, and dare I say it – yes even the DNC. His seat at the throne was stolen and ultimately gifted to a man who has left Cheeto stained paw prints all over the fabric of this country.

As a result, the Bernie of 2020 is an angrier, darker, and more strategic version of the man we saw four years ago. He’s not only re-energized but also has an understandable and valid chip on his shoulder. But here’s the thing, this isn’t like that movie The Dark Knight where our protagonist gets to blur the lines of decorum while moving in the shadows undetected. This is more like 2019’s Joker where the actions of one angry man quite literally have the ability to influence millions.

Is there a smear campaign out against Sanders? Absolutely. And that is wrong. Full stop.

But if some of his supporters can’t tell the difference between those who seek to take him down versus those of us with valid questions and concerns that only feeds the culture of intolerance, bitterness, and tribalism that’s already tearing us apart.

When Trump loses the election in 2020 (which I wholeheartedly hope he does), we can’t allow four years of his foolishness to turn us into a bunch of defensive, mean spirited fanatics incapable of listening to opposing views. One could argue he still won in a whole other way.

And that concerns me deeply.