Gay tried to make a joke of the blunder but received racially charged responses that she’s a "great example of why we need to end Affirmative Action." 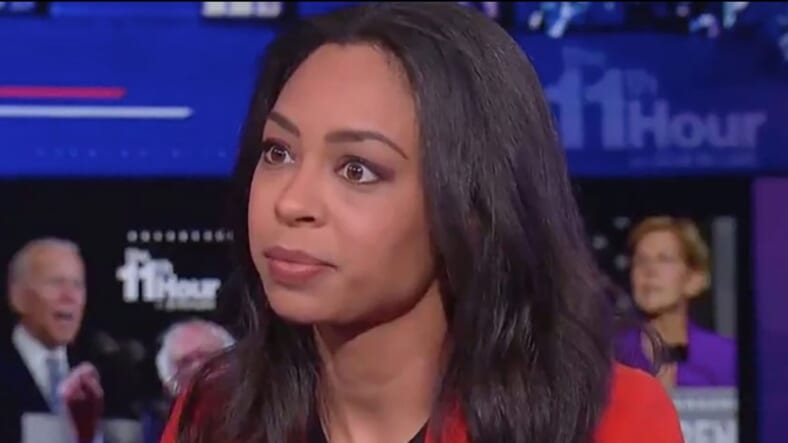 The New York Times editorial board member Mara Gay was dragged on Twitter following an #epicfail math demonstration on the air with MSNBC anchor Brian Williams.

The outcry began last week when a Twitter user claimed that the former New York City mayor “spent $500 million on ads. The U.S. population is 327 million. He could have given each American $1 million and still have money left over, I feel like a $1 million check would be life-changing for people. Yet he wasted it all on ads and STILL LOST.”

Williams called that “an incredible way of putting it.”

Gay agreed, saying: “It’s an incredible way of putting it. It’s true. It’s disturbing. It does suggest what we’re talking about here, which is there’s too much money in politics.”

how did this end up on tv? pic.twitter.com/xUYIOChhKv

The duo marveled at the now-hidden post on-air, failing to realize that $500 million divided among all Americans would not give each person $1 million.

In reality, Yahoo points out that if Bloomberg divvied his advertising dollars, “the per-capita cash-out would be more like $1.53 per person,” the outlet writes.

Yahoo Finance editor-at-large Daniel Roberts put Gay and Williams on blast via Twitter, musing that “the craziest part of this insane clip is when Brian Williams says ‘don’t tell us if you’re ahead of us on the math, and you think he’s about to realize on air that it’s wrong– and he doesn’t.”

READ MORE: MSNBC host says she stuttered, but did not say the n-word during Kobe Bryant coverage

On air, Williams corrected the mistake.

“While I have you both and our audience paying attention, turns out Mara and I got the same grades at math. I’m speaking of the tweet we both misinterpreted,” Williams said.

“He could give each American $1. Again, I didn’t have it in high school. I don’t have it tonight. I stand corrected. Sorry about that.”

Gay took the math fiasco in stride, sharing a tongue in cheek joke on Twitter Friday. She was out to buy a calculator.

She further addressed the hate she received over the blunder in an op-ed published Wednesday, titled, “My People Have Been Through Worse Than a Twitter Mob.”

Gay wrote that she thought the flub was funny and tried to laugh it off.

“In a normal time, that would have been the end of it. But, the country has lost its mind, so instead, it was only the beginning.”

Gay singled out the “right-wing trolls” and shared some of the racially charged responses she has received, such as someone saying she’s a “great example of why we need to end Affirmative Action.” Others said she only “fills a seat… because [you’re] black,” and “have a banana,” Gay wrote.

“I am a black woman who writes for The New York Times and appears on national TV. And, if you’re black in America, no matter who you are, what you accomplish or how hard you work, there will always be people to remind you that you are black, that you are ‘just a n—–,'” she continued.

“We are living in a world where there is no grace for the smallest, most inconsequential mistake. In an instant, I became a target of those who are furious with the media for being too liberal, or not liberal enough, a totem for the grievances of millions of people who seem to be hurting.”

Gay blasted the online culture of a pile on for the sake of clout.

“No doubt, some people piled on because they just wanted the ‘likes’ and brushed aside the inconvenient fact that I was a human being,” she wrote.

She also noted, “when you’re a black woman in America with a public voice, a trivial math error can lead to a deluge of hate.”