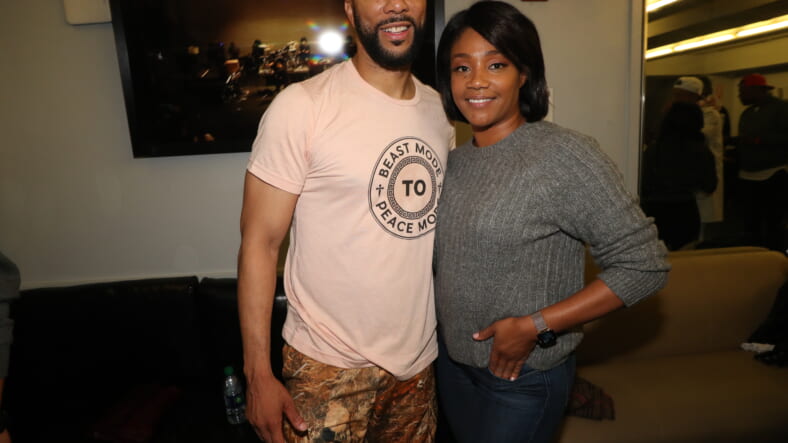 Common and Tiffany Hadish at The Apollo Theater on October 08, 2019 in New York City. (Photo by Johnny Nunez/WireImage)

Beyoncé‘s mother, Tina Knowles-Lawson (perhaps inadvertently) spilled the beans on Tiffany Haddish and Common’s romance by calling them a “beautiful couple” on social media last month. Now yet another celebrity friend has revealed that the duo has been getting close during the nationwide quarantine.

In the past when Haddish has been asked about her relationship with the actor, she’s coyly skirted the topic by saying they’re “just friends” but playfully adding that she would be interested in dating him if given the chance.

However, according to Deadline, Sunday, Cedric the Entertainer teamed up with some of his famous friends and Def Comedy Jam for a live-streamed coronavirus fundraiser called “Healing Through Laughter.” During one segment, Haddish and her reported beau made a surprise appearance.

Looks like Tiffany Haddish is quarantining with her boo Common

During their cyberspace conversation, the actress playfully revealed that she wasn’t in the house alone and that the Chicago-born rapper turned actor was actually keeping her company during the stay-at-home mandate.

Common was cool as a cucumber as he thanked Cedric for keeping people’s spirits up through humor during these uncertain times. However, when Haddish popped back on the screen, the look of mischief in her eyes was undeniable as she suggestively winked at the viewers and playfully stuck her tongue out.

As she walked down the hall, away from Common, Cedric echoed what many were thinking and said, “Tiff, that’s an exclusive.”

Organizers confirmed that 100% of the proceeds will go toward providing protective equipment to essential workers and individuals in inner-city communities in New York City. The fundraiser streamed live Sunday evening at 10pm ET/7pm PT on both Facebook and Twitch.

Check out the clip for yourself below.