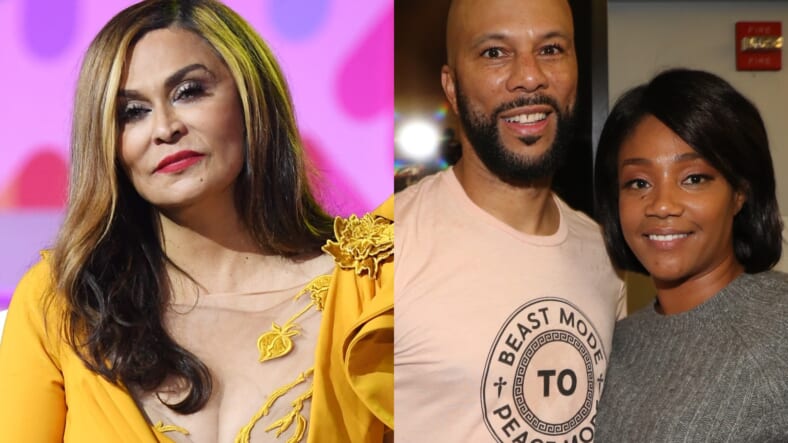 A couple of years ago Tiffany Haddish made headlines when she spilled the tea that a celebrity had bitten Beyoncé in the face at a party. Now it looks like Bey’s mother, Tina Knowles-Lawson has (perhaps inadvertently) returned the favor and spilled some news of her own.

Haddish, who has never been one to mince words, has confessed to having a crush on rapper Common for ages. In 2019, rumors began to circulate that her dreams had come true and led to a real-life romance.

Further fueling the speculations was a series of recent public appearances the two have made together including a courtside appearance during February’s NBA All-Star Game in Chicago.

Officially though, Haddish says she and the Oscar-winner are just friends. In the spirit of friendship, last week the Girl’s Trip star shared a sweet birthday message for the 48-year-old.

“Happy Birthday to My Friend @common !!!” she wrote.  “I Love that you are willing to go on @groupon adventures with me. #paintandpour plus food”

READ MORE: Tiffany Haddish, Byron Allen, Shaun Robinson, and more on who SHOULD have been nominated for Oscars this year

In the comment heard all around Instagram, Mama Knowles popped into her comments section out of nowhere and responded, “beautiful couple.”

Not surprisingly, this emboldened those now convinced that Beyoncé’s mother effectively exposed the thinly veiled couple as being more than friends.

Neither Common nor Haddish have issued a response.

Last year, political commentator Angela Rye revealed she and the rapper had called it quits because of her desire for children. It is a desire that Common did not share after having his 23-year-old daughter, Omoye.

”I wish Rashid (Common) the very best, but it was time for us to do something very different,” she explained in December.

READ MORE: Common tells Jada Pinkett Smith that he wants to be taken off the market

Happy Birthday to My Friend @common !!! I Love that you are willing to go on @groupon adventures with me. #paintandpour plus food