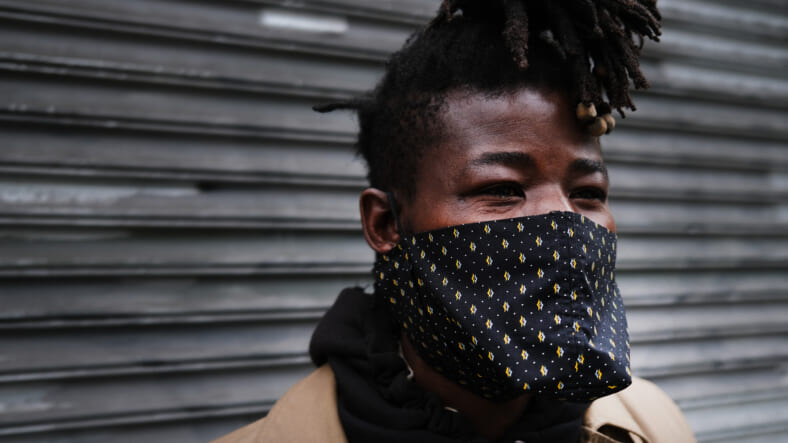 Abubacar, originally from Mali, pauses with his homemade face masks in the Harlem neighborhood as fears increasingly grow over the coronavirus pandemic on March 31, 2020 in New York City. (Photo by Spencer Platt/Getty Images)

It is being recommended by the Centers for Disease Control and Prevention that all Americans wear masks due to the coronavirus pandemic, but some people of color will not be taking heed.

Last week, US Surgeon General Dr. Jerome Adams demonstrated how to turn a bandana, scarf or old T-shirt into a mask in order to protect one’s face from the airborne disease. CNN reported Tuesday that not everyone is in a hurry to wear homemade masks and is not due to ignorance. For many, doing so would be another manner in which they are targeted.

“We have a lot of examples of the presumed criminality of black men in general,” Trevon Logan, an economics professor at Ohio State University who is Black, told CNN. “And then we have the advice to go out in public in something that … can certainly be read as being criminal or nefarious, particularly when applied to Black men.”

Others on social media also cited their discomfort with the guidance. Aaron Thomas, an educator in Ohio, tweeted that he had no real choices.

I don’t feel safe wearing a handkerchief or something else that isn’t CLEARLY a protective mask covering my face to the store because I am a Black man living in this world. I want to stay alive but I also want to stay alive.

“I don’t feel safe wearing a handkerchief or something else that isn’t CLEARLY a protective mask covering my face to the store because I am a Black man living in this world,” he posted. “I want to stay alive but I also want to stay alive.”

Bandanas and handkerchiefs have long been choices of attire that have led to racial profiling for Black and brown people.

“This (wearing a homemade mask) seems like a reasonable response unless you just sort of take American society out of it. When you can’t do that, you’re basically telling people to look dangerous given racial stereotypes that are out there,” Logan said.

People move through the streets of the Borough Park section of Brooklyn which has seen an upsurge of coronavirus patients on April 03, 2020 in New York City. Hospitals in New York City, which has been especially hard hit by the coronavirus, are facing shortages of beds, ventilators and protective equipment for medical staff. Currently, over 75,000 New Yorkers have tested positive for coronavirus (Photo by Spencer Platt/Getty Images)

“This is in the larger context of black men fitting the description of a suspect who has a hood on, who has a face covering on,” he added. “It looks like almost every criminal sketch of any garden-variety black suspect.”

The Bloods and Crips street gangs have often used the cloth as a symbol of identication. Cyntoria Johnson, an assistant professor in the Department of Criminal Justice and Criminology at Georgia State University, said the police are already inclined to judge by appearance. A study by the Stanford Open Policing Project found that officers were more likely to stop Blacks at a higher rate and there have been more police shootings involving them.

To wear a homemade mask is one of life and death it was argued.

“Not wearing a protective bandana goes against CDC recommendations and increases the risk of contracting Covid-19, but wearing one could mean putting their lives at risk of getting shot or killed because of racially-biased targeting,” ReNika Moore, director of the ACLU’s Racial Justice Program, said.