OPINION: Nicole Duncan-Smith, a member of Bring Back Our Girls, USA, urges the world not to forget the 112 Nigerian girls still missing after 2014 abduction 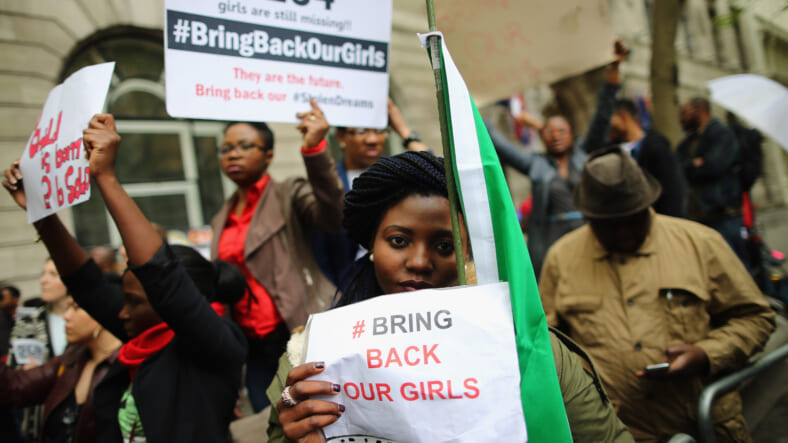 Protesters calling for the release of a group of abducted Nigerian schoolgirls gather outside Nigeria House on May 9, 2014 in London, England. (Photo by Dan Kitwood/Getty Images)

It has been roughly 2,191 days since 276 young African princesses were kidnapped from the dormitory of the Government Girls Secondary School in Chibok, Nigeria.

According to Sarah Samuel (and corroborated by her sister Naomi Adamu), up until the night their lives were upended when strange men burst into the school, it was an incubator of #BlackGirlMagic, powered like pixie dust throughout the air. These girls were the brightest and best of their villages and were there to take their final exams in physics.

READ MORE: After 6 long years, 112 of the kidnapped Chibok girls are still missing

But the girls, not only needed to be tested — they wanted to. They were seniors, young women ranging from 16 to 18, and their dream was to pass, graduate and perhaps attend the university.

Over 500 girls registered to take this test. And while it is unclear how many made it from their village for its administration, we know that number (and the names) of those who were there when Boko Haram encroached on its the doors. 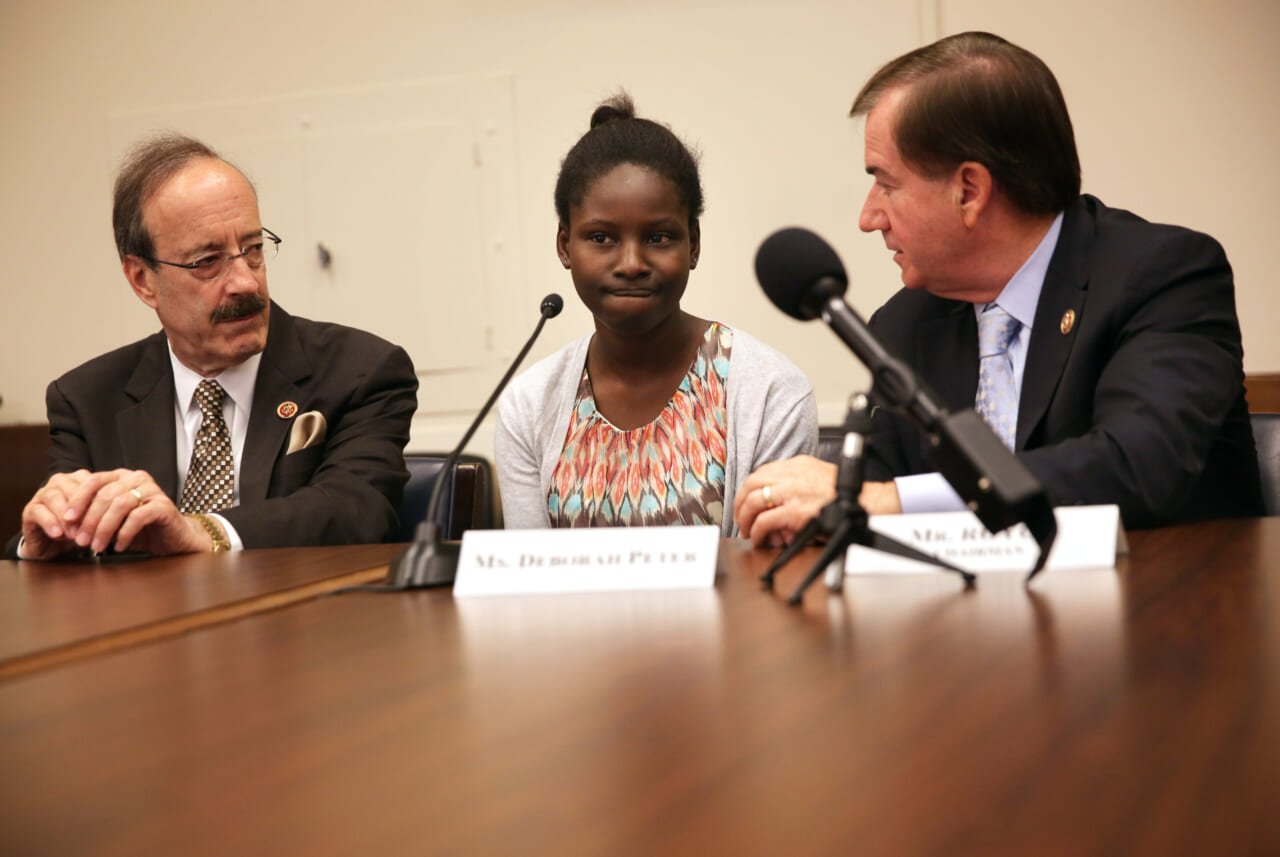 At first, the soldiers noted that their intentions were not to even bother the girls. They wanted to steal a generator. Instead, the girls became unintended witnesses, and on a larger level, could be used as political and religious pawns.

The jihadists terrorists had a message they wanted to send to the world: THE WESTERN WORLD (AND ALL ITS IDEOLOGIES) WERE BAD.

READ MORE: Is the #BringBackOurGirls movement a failure?

Girls learning — stepping out of the traditional role of only raising babies and kitchen work— was not just bad, but not of God.

Thus, the lives of those girls (Sarah and Naomi, Ruth Amos, Comfort Habila, Saratu Ayuba and so many whose names should never be blotted from our collective memory) will never be the same.

Six years later, 164 have been returned or accounted for. Many of them struggle to readjust as some have been ostracized for wearing the unearned cloak of shame that many victims have to dress themselves in. We can thank God for those who, over the last few years, have either escaped or negotiated themselves out of bondage, however, there are still 112 unaccounted young women, still ransomed, sold into slavery, forced into marriage and/or dead. 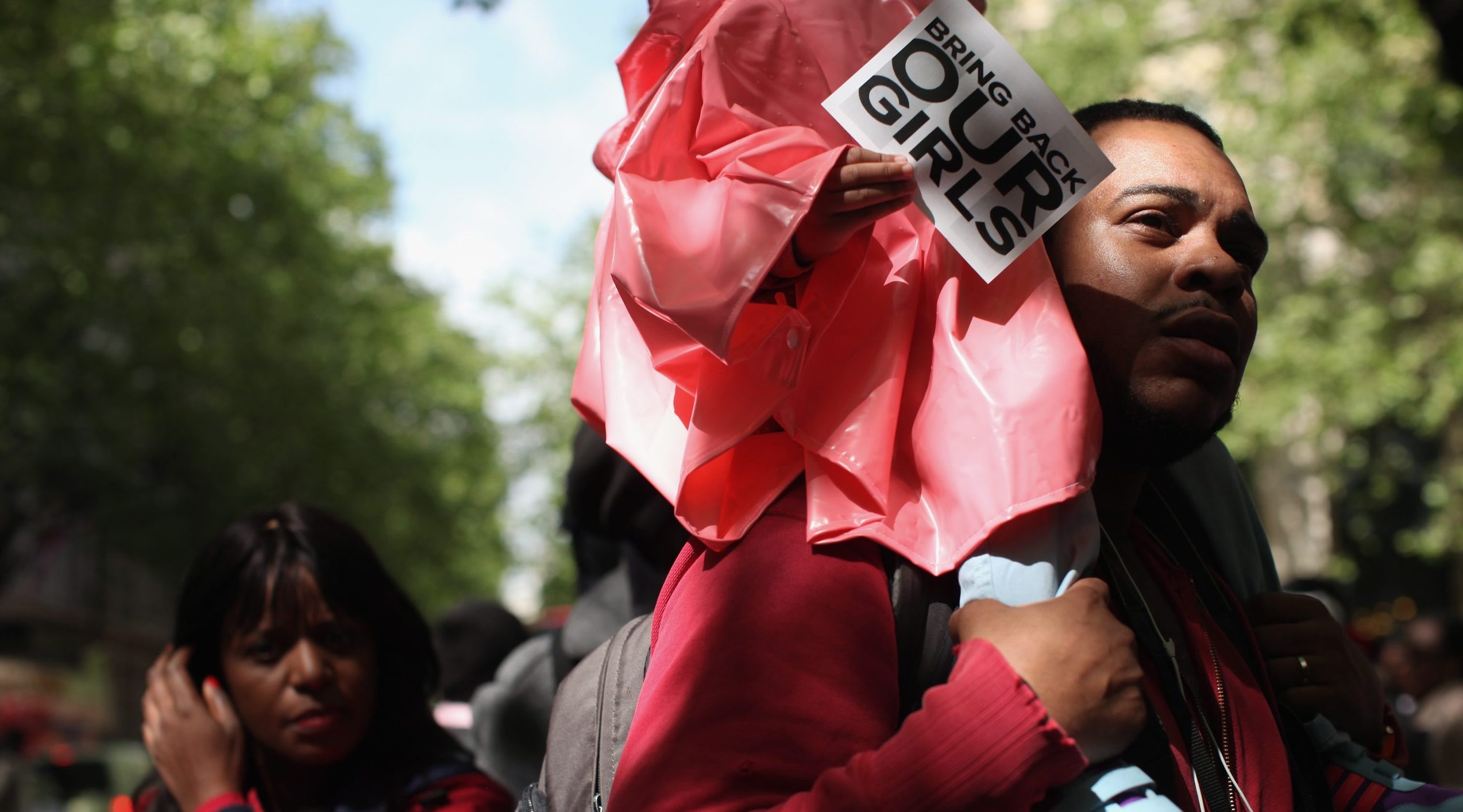 Protesters calling for the release of a group of abducted Nigerian schoolgirls gather outside Nigeria House on May 9, 2014 in London, England. (Photo by Dan Kitwood/Getty Images)

Over the last two days, there have been small vigils and protests where people shout, “Bring Back Our Girls.” However, those shouts are muted by the noise of so many other things going on in the world.

Presently, the entire globe is grappling with the novel coronavirus pandemic. It is the most pressing news of the day, but there has to be at least a smidgen of time in the news cycle to ask the essential questions: Where are they? Why has it taken so long?

Just Google “#BringBackOurGirls” or “The Chibok girls” and notice how few current news items pop up on the search page results.

As theGrio recently reported, Nigerian President Muhammadu Buhari has said that he will renew his fight for the missing girls. It is difficult to take his word as bond. Each year, when the anniversary arrives, he says the same thing. This time the message is a little different as he has shared that some of the young women are advising them on the ways of the Boko Haram, and giving them vital details that will assist in the discovery of where they are today. 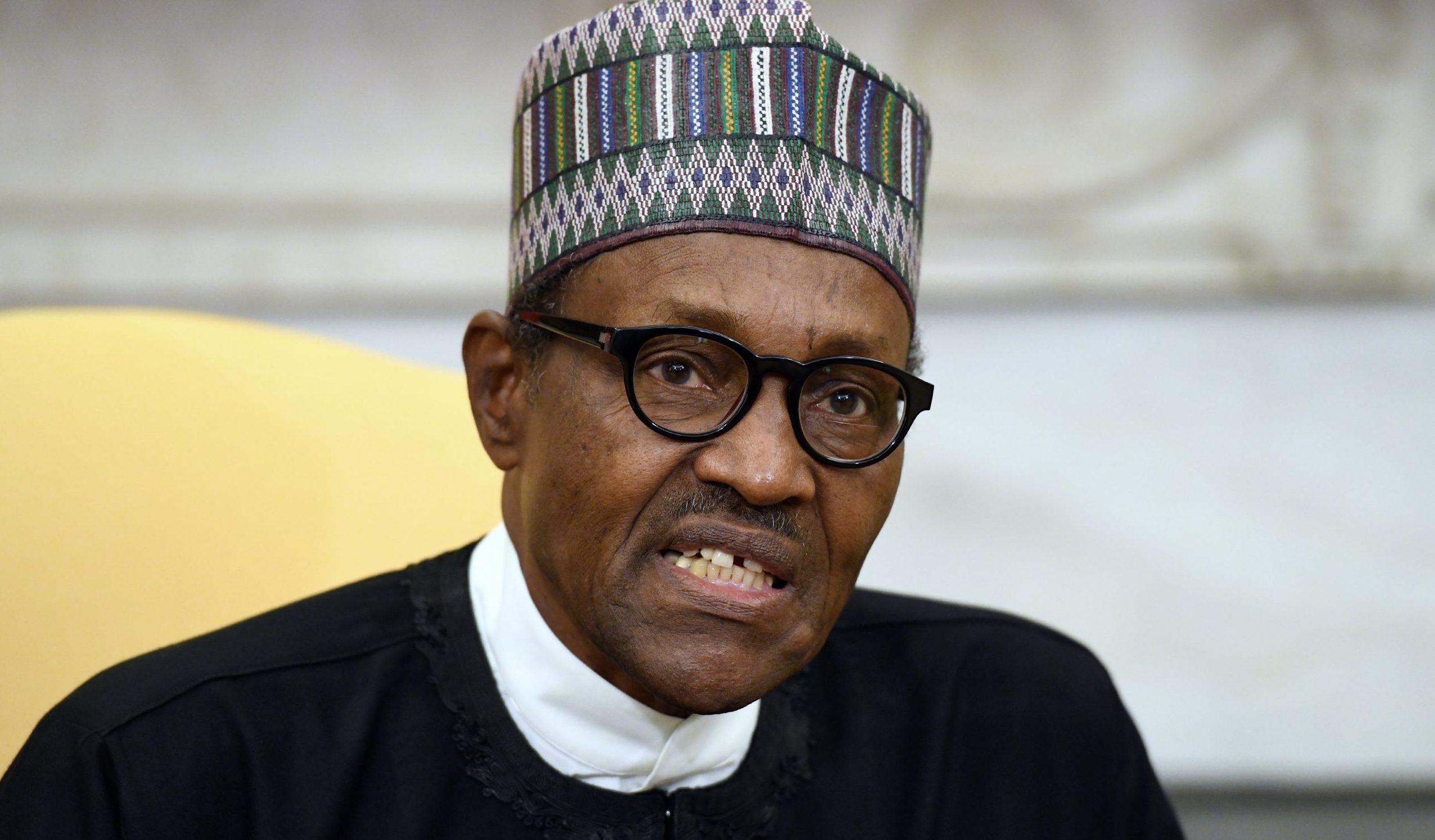 Nigerian President Muhammadu Buhari speaks during a meeting with US President Donald Trump in the Oval Office of the White House on April 30, 2018 in Washington, DC.  (Photo by Olivier Douliery-Pool/Getty Images)

But Oby Ezekwesili, one of the leading voices of the international #BringBackOurGirls movement, is just a little exhausted of getting her heart worked up in hopes of getting support. She believes the lack of empathy from the Nigerian government (which trickles out all over the world) is why the girls are not with their families today.

The politics and red tape are discouraging but will not stop her fight— and our prayers.

My daughter, Eden, and I joined the outcry in 2015. It was around the time of Minister Stephen Davis shared with the world that he had proof of life, claiming to have a video of at least two of the girls being raped. We were contacted by the U.S. cohort of the #BringBackOurGirls organization.

What was noticeable was that while during the first year, big-time celebrities like Rihanna and Michelle Obama were hashtagging away, very few of those voices were audible … at least loud enough for the Nigerian government to hear.

Through the US #BringBackOurGirls organization and the Church Center for the United Nations, we did silent protests and sleepovers in front of the Nigerian Embassy. We sent press releases out and begged for press attention, but only but a few blogs came to cover those awareness campaigns. 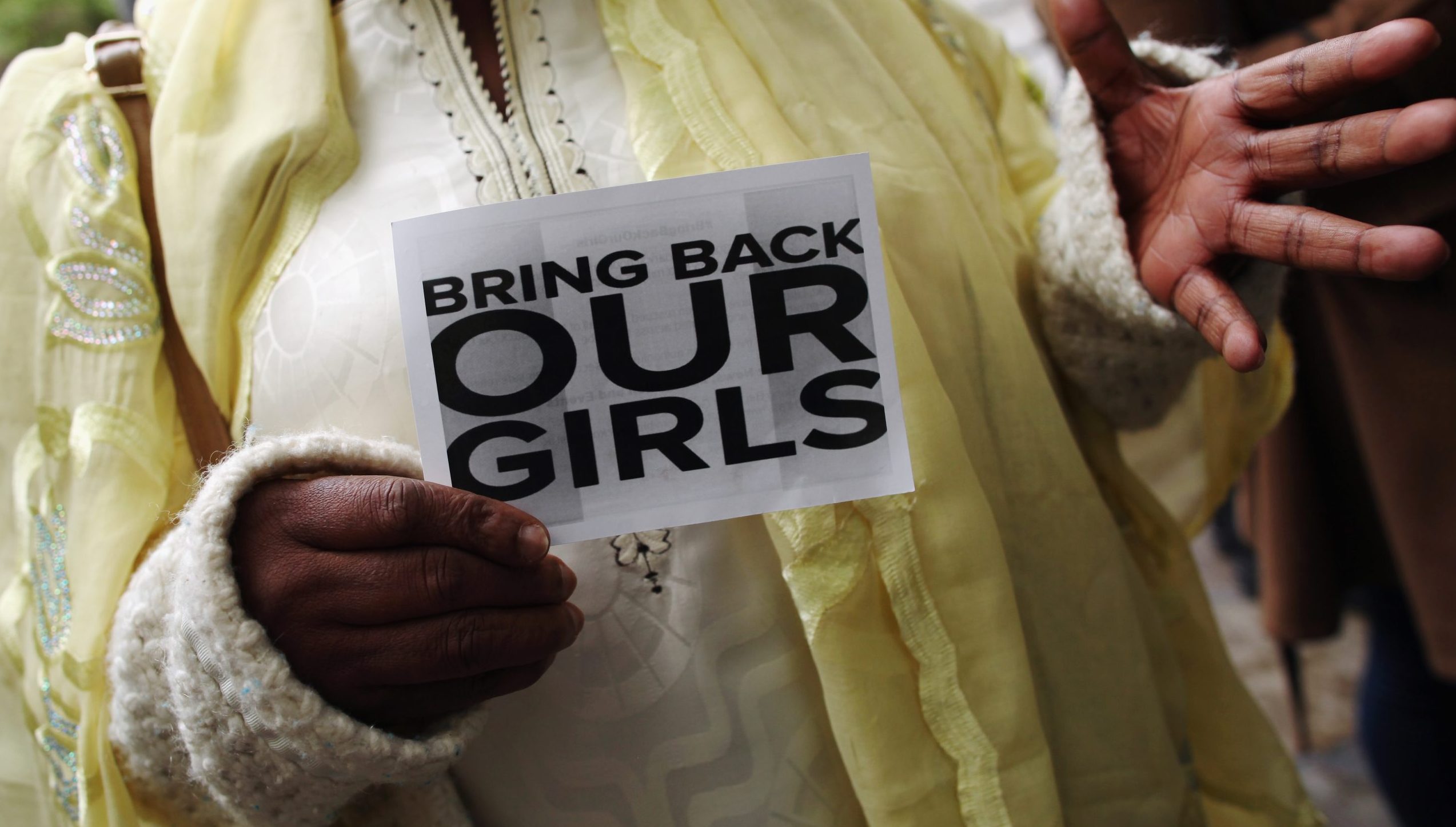 A woman holds a sign that reads ‘Bring back our girls’ during a protest outside Nigeria House on May 9, 2014 in London, England. (Photo by Dan Kitwood/Getty Images)

It gets weary. The group seems to get smaller. But surprisingly the ache in the hearts of those still in the struggle increases. It grows because the lack of energy around the missing girls — some sold into marriage for about the same price you might pay for a Starbucks latte — points to how little Black feminine bodies are valued in this world.

We don’t have to look to Africa to see that … we see it at every turn in American culture.

Yes, go ahead and celebrate #BlackGirlsRock (it needs to be a weekly series to give a real testament to how unbelievably dope Black girls really are), but remember that too many of those Black girls who have/had the same potential to rock are subjugated to unimaginable lives that do honor them as treasures.

It has been six years since some of these girls have seen their parents and loved ones. Consider the grandparents who have died, the dreams of falling in love, what the first day of college would’ve been like for them. Think about the children, your nieces, your cousins, your daughters — wouldn’t you stop at nothing until your loves are returned?

The answer should be easy, even if actualizing them back and healthy in the arms of their community is not. #BringBackOurGirls

Nicole Duncan-Smith is from West Philadelphia born and raised, and in the playground is where she spent most of her days. Currently, she serves as the first ordained female reverend at The St. Paul Community Baptist Church, and lectures on hip-hop as a viable love language to teach the Gospel. She is the founder of Haymakers Presents Battlecon, the first battle rap convention. She is a wife, a mother, a candidate for the Daughters of The American Revolution (go figure) and a contributing editor at theGrio.