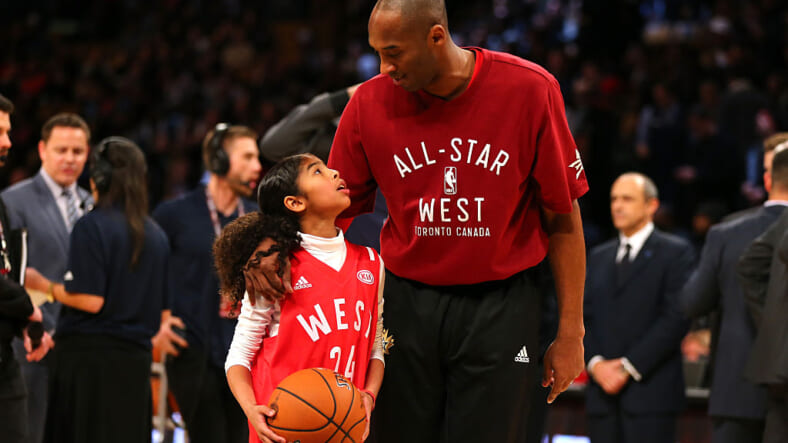 TORONTO, ON - FEBRUARY 14: Kobe Bryant #24 of the Los Angeles Lakers and the Western Conference warms up with daughter Gianna Bryant during the NBA All-Star Game 2016 (Photo by Elsa/Getty Images)

The WNBA held its annual draft on Friday and used the occasion to honor the memory of the late Kobe and Gianna Bryant with a new award in their names.

The award was established to “recognize an individual or group who has made significant contributions to the visibility, perception and advancement of women’s and girls’ basketball at all levels,” the league said.

“Kobe was an incredible champion of women’s basketball and Gianna shared his passion and dedication to our game,” Engelbert said. “The Kobe and Gigi Bryant WNBA Advocacy Award will honor their legacy and reflect Kobe’s commitment to mentoring the next generation of players, promoting the game and giving back to the community.”

The award will be given at future NBA All-Star weekends. Vanessa Bryant, Kobe’s widow, will be involved in choosing honorees.

The WNBA has officially announced the Kobe and Gigi Bryant WNBA Advocacy Award, which will recognize an individual or group who has made significant contributions to the visibility, perception and advancement of women’s and girls’ basketball at all levels. pic.twitter.com/UjsmV8l8Bt

Kobe Bryant, who perished alongside his daughter Gianna in a late-January helicopter crash, was a well-known ambassador for women’s basketball. After retiring from the NBA in 2016, the legendary baller got involved in what would become the Mamba Sports Academy and coached his daughter’s basketball team.

In addition to announcing the award, Gianna and her teammates Alyssa Altobelli and Payton Chester, who also died in the California accident, were named as honorary 2020 WNBA draft picks, as reported by TMZ.

“While it brings us pain not to see their dreams come to fruition, I’m grateful and proud to announce them tonight as honorary draft picks,” Englebert said.

Kobe Bryant’s influence could be found elsewhere at the WNBA draft. The New York Liberty picked Oregon University‘s Sabrina Ionescu for the No. 1 selection.

Ionescu, who spoke at a televised memorial service for the Bryants in February, was a friend and mentee of Kobe Bryant.