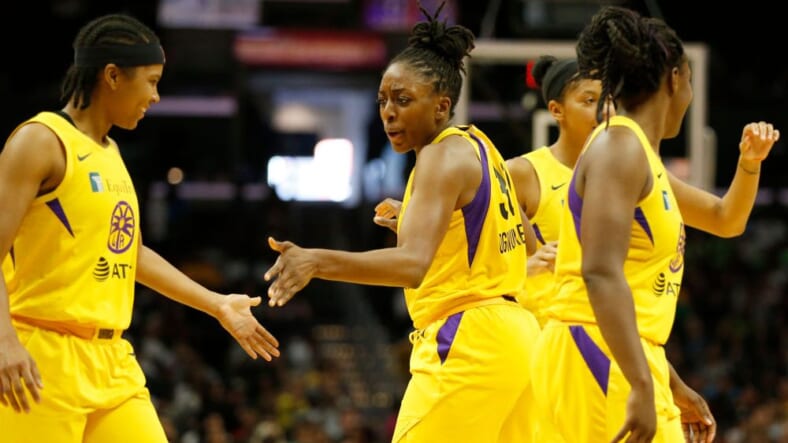 LOS ANGELES, CALIFORNIA – AUGUST 04: Tierra Ruffin-Pratt #10 and Nneka Ogwumike #30 of the Los Angeles Sparks high-five between plays during the second half of a game against the Seattle Storm at Staples Center on August 04, 2019 in Los Angeles, California. (Photo by Katharine Lotze/Getty Images)

Six-figure salaries. Paid maternity leave. This is the new WNBA, thanks to a groundbreaking collective bargaining agreement unveiled on Tuesday.

For the first time in WNBA history, all WNBA athletes will receive six-figure salaries and star athletes can receive up to half a million dollars in compensation packages, under the historic deal. The agreement raises current salaries by 53 percent and increases the cash bonus amounts earned by players for performance awards, such as MVP or rookie of the year, according to ABC’s Good Morning America.

“We’re so proud of the players and their ability to unify around the important issues to them,” Engelbert told Roberts. “And while they bargained hard, we came together, we collaborated and we have what we think is a groundbreaking agreement that’s going to support these players for the long-term and the next generation of players.”

One significant component of the agreement is to provide WNBA athletes with a full salary while they are out on maternity leave. Benefits also cover adoption, surrogacy, and fertility/infertility treatment costs. players with children will also receive family housing and workplace accommodations to allow them to nurse their babies. The new agreement also provides opportunities to help players transition to careers after basketball.

“We wanted to leave a legacy,” Ogwumike said on GMA. “I think we came in understanding that it wasn’t just about the top player. It wasn’t just about the rookies. It was about every player across the board and we were really happy to be able to come together with the WNBA with actually a lot of innovative ideas.”

Engelbert and Ogwumike added that they hope this deal transcends the WNBA and provides a model for both women in society and those playing other professional sports.

“These are things to redefine what it means to be a professional female athlete in society today,” said Engelbert. “We’re hoping to lift not just women in sports, women in basketball but women in society.”