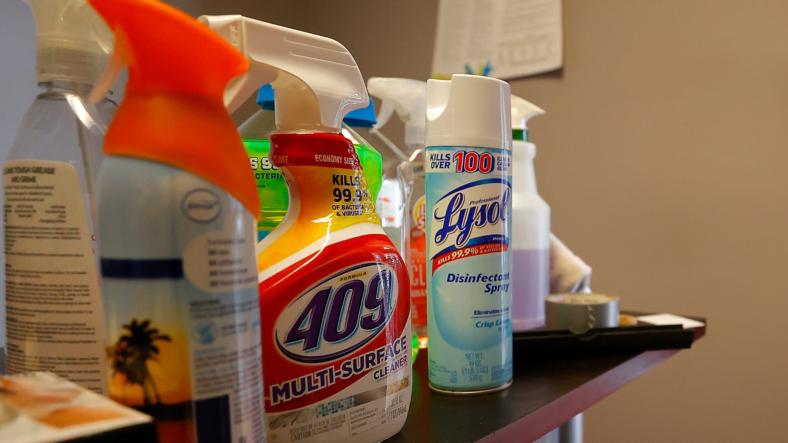 POWDER SPRINGS, GEORGIA – APRIL 24: A view of the cleaning and sanitizing bottles used at Workout Anytime Powder Springs gym as it reopened for business on April 24, 2020 in Powder Springs, Georgia. Georgia Governor Brian Kemp announced this week that some “non-essential” businesses will be allowed to reopen amid the COVID-19 pandemic following strict guidelines. (Photo by Kevin C. Cox/Getty Images)

Two men in Georgia were treated by emergency physicians after allegedly ingesting disinfectants to guard themselves against the coronavirus.

According to a report in the Atlanta Journal-Constitution, both men have a history of psychiatric problems.

The state has seen a spike in poisonings primarily from people mixing household disinfectants, trying to keep surfaces clean, then inhaling the dangerous fumes. Georgia’s poison control center has seen a doubling of their average monthly calls.

One of the men, in his 50s, told doctors that he drank several ounces of bleach “to prevent COVID,” he was treated, moved to a psychiatric ward, and later released.

The other man, in his 30s, told doctors that he drank a combination of Pine-Sol, mouthwash, beer, as well as pain medication. He too was treated and released.

Gaylord Lopez, the head of Georgia’s poison control center stated that the pandemic can be particularly hard on the mentally ill.

Last week, President Donald J. Trump questioned whether disinfectants could be used inside the human body, musing if “we can do something like that, by injection inside or almost a cleaning?”

The comments sparked immediate disbelief and outrage. The president later tried to walk back the comments stating that he was being “sarcastic,” before again blaming the media for misinterpreting his remarks.

“I was asking a sarcastic, & a very sarcastic question, to the reporters in the room about disinfectant on the inside. But it does kill it.” — Trump tries to rewrite history, says he was speaking “sarcastically” when he mused about disinfectant injections being cure for Covid. pic.twitter.com/bWRU8EV6FZ

The remarks prompted Reckitt Benckiser, the UK-based manufacturer of Lysol, a commonly used disinfectant, to issue a warning about the misuse of its products.

“As a global leader in health and hygiene products, we must be clear that under no circumstance should our disinfectant products be administered into the human body (through injection, ingestion, or any other route).”

Ingestion of household cleaners and disinfectants can be fatal.

The president said on Monday that he takes no responsibility for the increase of calls to poison control centers due to people trying to ingest disinfectants. When asked about the increase during a White House news conference, Trump said, “I can’t imagine why.”

Of course, he can’t.