The actress also opens up about her mother-in-law's victory over COVID-19.

Simone Missick has been making huge strides as the first Black woman to lead a primetime drama on CBS in All Rise and now she’s making more history with the show’s season finale.

The episode was produced remotely and will show the stars confronting the COVID-19 crisis head-on. While the task of filming an entire episode from home with no crew to help out was “daunting,” the actress got an assist from her actor husband, For Life star, Dorian Missick.

Although some folks may not even realize the actors have been married for eight years, their mutual talents came in handy while attempting the ground-breaking episode.

“My husband is an actor and in this episode he’s playing a version of himself. He’s playing a DJ which he also does in real life. He’s a phenomenal DJ and he has been doing IG Live sets raising money for essential workers and keeping people motivated,” she says. 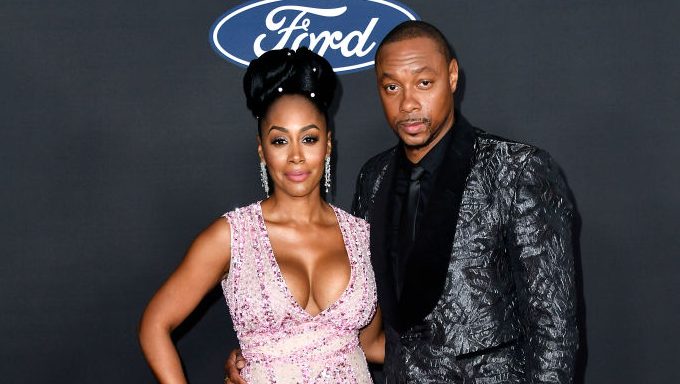 “We get to see him as DJ Tailwind, the omnipresent narrator through the episode. For him to be able to do it on the show was really great.

“This is not the first time we have worked together. We worked on season 2 of ‘Luke Cage’ together and I must have kept it a secret,” Missick adds. “It’s great that we are both enjoying some success at the same time with these shows.”

While their acting talents helped them join forces to pull off the episode that airs May 4, the Missicks have a secret weapon for keeping things cool while they’re quarantined together at home.

“We have a co-worker named ‘Carole’ and she gets blamed for everything. This morning, ‘Carole’ put the sugar on the top shelf of the cabinet knowing I can’t reach it. ‘Carole’ left her dirty socks in the middle of the floor too,” she jokes.

“It’s a way we can not blame one another and for us to realize how unimportant these nit-picky things are that come up during a pandemic and yet gently say to the other person, ‘stop putting the sugar on the top shelf.’

Another thing that has brought the couple closer than ever is their personal battle with the coronavirus.

“We shut down production on March 13 and on March 15 [and] my mother in law came down with symptoms of coronavirus. Within a week, she was in the ICU and on a ventilator. Our family came together and prayed three times a day together. I decided to fast during that time and we prayed with the deacon from the church until she got home,” Missick explains.

“Now, we talk every day at the same time on Zoom. It has brought us so close. We are talking now more than we have ever talked. It has also gotten me and my family and friends to FaceTime and check in on each other. We do Zoom happy hours and game nights and we’re about to do a cooking class. You forget that these things are important.”

Missick admits that although the pandemic is truly terrible, there is always a silver lining to look out for.

“This is a scary time for a lot of people and I recognize how fortunate my family is, but it really makes you aware of how important family is and you cannot replace them.”

The season finale of All Rise airs May 4 on CBS.