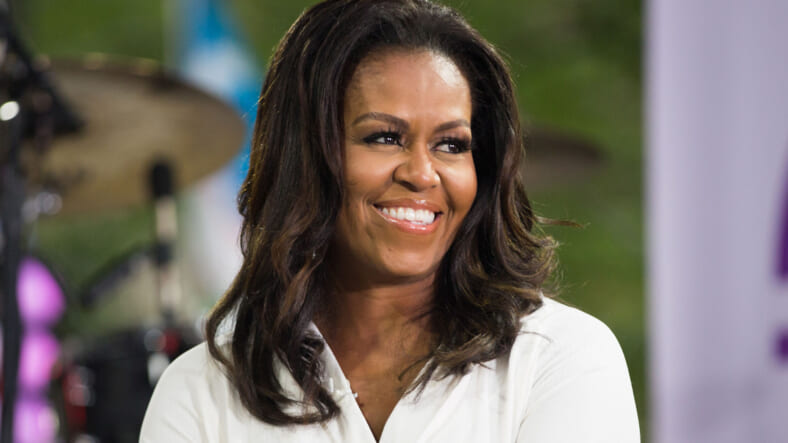 A new political action committee is working to build “substantial grassroots support for a potential Michelle Obama candidacy and help garner media attention for a vice-presidential nominee who has the power to beat Donald Trump.”

The Committee to Draft Michelle Obama filed a Statement of Organization last month with the Federal Election Commission. The group is headed by a small group of liberals with experience in politics. According to their website, DraftMichelle.org, “Millions of Americans support Michelle Obama as the Democratic Party’s VP Nominee. We’ve assembled a group of advocates who are on the forefront of the initiative.”

In a comprehensive statement, the group states that it “firmly believes that Ms. Obama will not only benefit the Democratic ticket this November but also help lead this country to be more just and caring.”

CHICAGO, IL – NOVEMBER 13: Former first lady Michelle Obama kicks off her Becoming book tour with a signing at the Seminary Co-op bookstore on November 13, 2018 in Chicago, Illinois. In the book, which was released today, Obama describes her journey from Chicago’s South Side to the White House. (Photo by Scott Olson/Getty Images)

The group says that they think that November’s presidential election is “a historic battle to reclaim the soul of America,” and explains that the havoc wrecked by the coronavirus epidemic means that the Democratic Party must nominate a vice-presidential nominee “who has the trust of the American people, a vision to lead our nation forward and empathy for the challenges faced by all Americans.”

Further, they go on to say that they, “believe that Mrs. Obama’s perspective will go a long way towards building an honest, people-centered campaign this year as well as positively informing policy in the White House in years to come.”

While all of that is true, Mrs. Obama has stated, emphatically, that she has no desire to run for public office. In fact in her memoir, “Becoming” she wrote: “I’ll say it here directly: I have no intention of running for office, ever.”

However, while The Committee to Draft Michelle Obama may have one person in mind for vice-president, they said in their statement that, “However strongly we support Ms. Obama as former Vice President Joe Biden’s running mate, we will transfer our resolve to whoever joins the ticket to defeat the most dangerous incumbent in the history of our nation.”