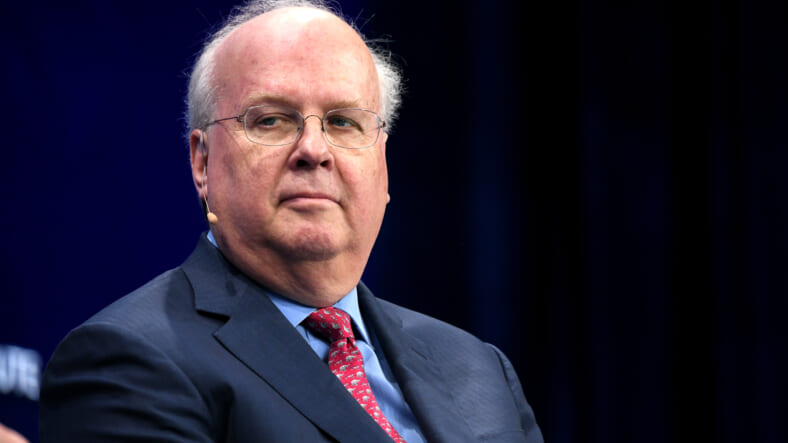 Karl Rove participates in a panel discussion during the annual Milken Institute Global Conference at The Beverly Hilton Hotel on April 29, 2019 in Beverly Hills, California. (Photo by Michael Kovac/Getty Images)

Karl Rove didn’t hold anything back when asked about his opinion on Barack Obama‘s virtual 2020 commencement speech.

The 67-year-old right-wing contributor said the address, which was given to historically black college and university graduates, was a “political drive-by shooting” during an appearance on Fox News on Monday, May 18.

“It is so unseemly for a former president to take the virtual commencement ceremony for a series of historically black colleges and universities and turn it into a political drive-by shooting,” Rove said about the speech, which the former president delivered on Saturday, May 16.

"It is so unseemly for a former president to take the virtual commencement ceremony for a series of historically black colleges and universities and turn it into a political drive-by shooting" — Karl Rove on Obama's commencement speech in which he indirectly criticized Trump pic.twitter.com/stZamQFhgF

“This is a moment where these young graduates could be inspired to a life of service, to recognize that life is going to bring challenges and how we handle the challenges is going to demonstrate our character,” Rove added. “There are lots of positive messages that the former president could have delivered.”

The former White House strategist went on to accuse Obama of “slandering” President Donald Trump and Vice President Mike Pence. However, during his commencement speech, Obama did not mention Trump or Pence by name.

Instead, he focused on sharing a message of positivity and uplift, encouraging students to create the life that they want for themselves and their peers.

“More than anything, this pandemic has fully, finally torn back the curtain on the idea that so many of the folks in charge know what they’re doing,” Obama explained during his address. “A lot them aren’t even pretending to be in charge.”

He continued, “If the world’s going to get better, it’s going to be up to you. With everything suddenly feeling like it’s up for grabs, this is your time to seize the initiative. Nobody can tell you anymore that you should be waiting your turn. Nobody can tell you anymore ‘this is how it’s always been done.’ More than ever, this is your moment — your generation’s world to shape.”

Thank you @BarackObama for your support for HBCUs—and for believing in the Class of 2020 as they set out to change the world. #ShowMeYourWalk pic.twitter.com/dqgqvbmksS