In one of two addresses to the class of 2020, the former president says an HBCU education shows students 'the world as it ought to be' 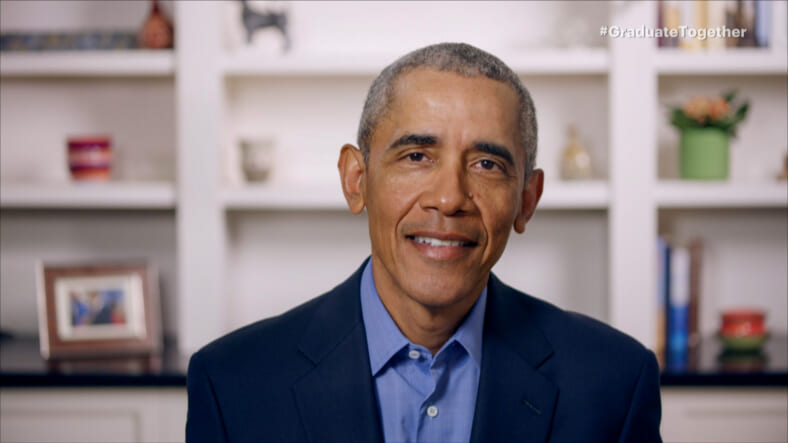 In this screengrab, former President Barack Obama speaks during Graduate Together: America Honors the High School Class of 2020 on May 16, 2020. (Photo by Getty Images/Getty Images for EIF & XQ)

Former President Barack Obama took the virtual stage on Saturday to deliver two commencement speeches during an unprecedented time in the nation’s history.

The speeches were addressed to high school and college graduates of the class of 2020. The coronavirus pandemic, which has disrupted the way of life across the globe, and the U.S. response to the crisis was one central theme in the addresses.

The first speech was aimed at graduates of Historically Black Colleges and Universities. Obama, who has delivered commencement speeches at Morehouse College and Howard University in the past, commended the new alumni for getting through college amid financial and personal obstacles.

He also quipped that students completed their last semester at “Zoom University” in reference to Zoom Video, the video conferencing program that educational institutions and businesses alike hurriedly adopted for remote learning and working due to the virus outbreak.

“These aren’t normal times. You’re being asked to find your way in a world during a devastating pandemic,” Obama stated. “A disease like this just spotlights the inequalities and extra burdens that Black communities have historically had to deal with in this country.”

Thank you @BarackObama for your support for HBCUs—and for believing in the Class of 2020 as they set out to change the world. #ShowMeYourWalk pic.twitter.com/dqgqvbmksS

Halfway thru his eight-minute speech, Obama pointedly commented on the ineptitude of the government’s actions and lack of actions during the coronavirus pandemic.

“More than anything, this pandemic has fully, finally torn back the curtain on the idea that so many of the folks in charge know what they’re doing,” Obama continued. “A lot of them aren’t even pretending to be in charge.”

Obama also used the handling of the pandemic and long-standing racial inequalities to advise the students about the importance of effective leadership. He told students that “the status quo needs fixing” because “the old ways of doing things don’t work.”

While the speech was intended for graduating seniors, the words reverberate throughout society.

“As young African Americans, you’ve been exposed, earlier than some, to the world as it is,” he said. “But as young HBCU grads, your education has also shown you the world as it ought to be.”

Although he didn’t mention any names, some believe he was aiming at President Donald Trump.