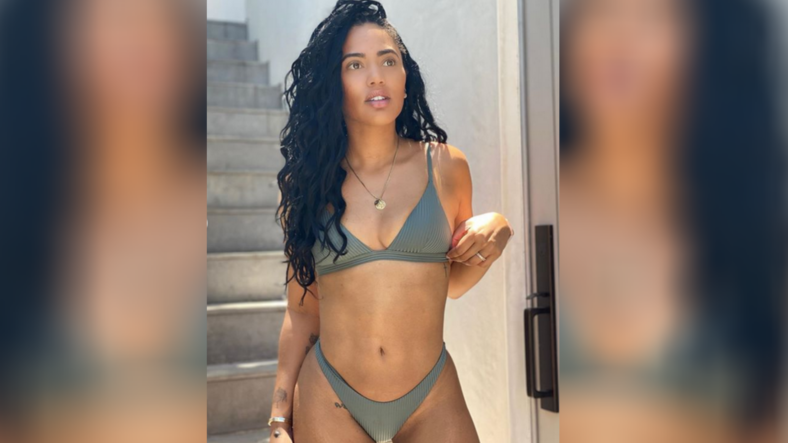 Television personality, entrepreneur, and mother of three, Ayesha Curry showed off her newly-toned body on Instagram this weekend.

Clad in a flattering grey bikini, she shared the two photos with the caption, “Took me long enough.” The pictures were taken by her husband, Golden State Warriors player Stephen Curry.

The photos have garnered nearly a million likes with comments from many of Curry’s celebrity friends. Kelly Rowland said, “Get it, Mama!” While actress Gabrielle Union said, “Alrighty. Lemme get my life together.”

One commenter asked how is it possible that Curry doesn’t have stretch marks although she has given birth to three children. Not to let the remark slide, she responded saying that they are on her sides and thighs.

But, it isn’t just her remarkable weight loss that is making the pictures go viral.

The bikini-clad photos prompted some Twitter users to bring up some of Curry’s previous tweets.

“Everyone’s into barely wearing clothes these days, huh?” she tweeted in 2015, “I like to keep the good stuff covered up for the one who matters.”

Everyone’s into barely wearing clothes these days huh? Not my style. I like to keep the good stuff covered up for the one who matters ???

The old tweet was seen as slut-shaming. Five years later, as she showed a little skin, some people have pointed out the what they see is hypocrisy. “I’m laughing at the fact that Ayesha Curry was trying to slut-shame women for not dressing modestly when she was chubby.”

I’m laughing at the fact ayesha curry was really tryna slut shame women for not dressing modestly when she was chubby, now she’s lost weight she she’s flinging bikini pics on the gram. So the real storyline here is don’t project your insecurities on to everyone else silly cow

Other users supported Curry’s health journey of losing approximately 35 pounds. “She’s spent all of her years taking care of their family; being a wife and mother. She deserves to have her moment without judgment,” one user wrote.

Ayesha Curry said “I’m down 35lbs & very happy to be. I spent my entire 20s having babies, nursing babies. Now it’s time for me to nurse myself.” Unlike the rest of the internet, I’m super happy for her & her journey!

Curry recently launched a magazine called Sweet July. The magazine features recipes, interviews, and a column where she answers questions posed to her by her children. She is the third African American woman to have her own major magazine after Oprah and the late B. Smith.

Sweet July is available on newsstands and online for $9.99.