The NFL superstar's opinion was greeted with scorn from his teammates and other athletes.

Drew Brees #9 of the New Orleans Saints watches on after defeating the Carolina Panthers 42-10m at Bank of America Stadium. (Photo by Streeter Lecka/Getty Images)

New Orleans quarterback Drew Brees waded into the controversy over policing in the United States in the aftermath of George Floyd‘s death- and it didn’t go well. He would never kneel during the national anthem to bring awareness.

Brees was asked by a reporter at Yahoo Finance about how he would feel if players followed the lead of Colin Kaepernick and started kneeling when the national anthem played. Brees, referencing his two grandfathers who fought in World War II, said he couldn’t agree to anything that disrespected the flag.

“Everyone is looking back now and Kaepernick’s protests from a few years ago and they were always about police brutality and now it’s coming back to the fore and a lot of people expect that we will see players kneeling again if and when the NFL season starts,” Yahoo’s Daniel Roberts said.

“I’m curious how you think the NFL will and should respond to that. And of course, you’re such a leader in the league, what is your responsibility in times like this for the rest of your teammates and players in the league?”

Brees answered by saying he would never support kneeling.

“I will never agree with anybody disrespecting the flag of the United States of America or our country,” the Dallas, Texas native said.

“Let me just tell you what I feel or what I see when the national anthem is played, when I look at the flag of the United States. I look at my two grandfathers, who fought for this country during World War II, one in the Army and one in the Marine Corps, both risking their lives to protect our country and try to make this world a better place. So every time I stand with my hand over my heart, looking at that flag and singing the national anthem, that’s what I think about and in many cases, it brings me to tears, thinking about all that has been sacrificed but for that matter, those throughout the civil rights movements of the 60s and all that has been endured by so many people up into this point. 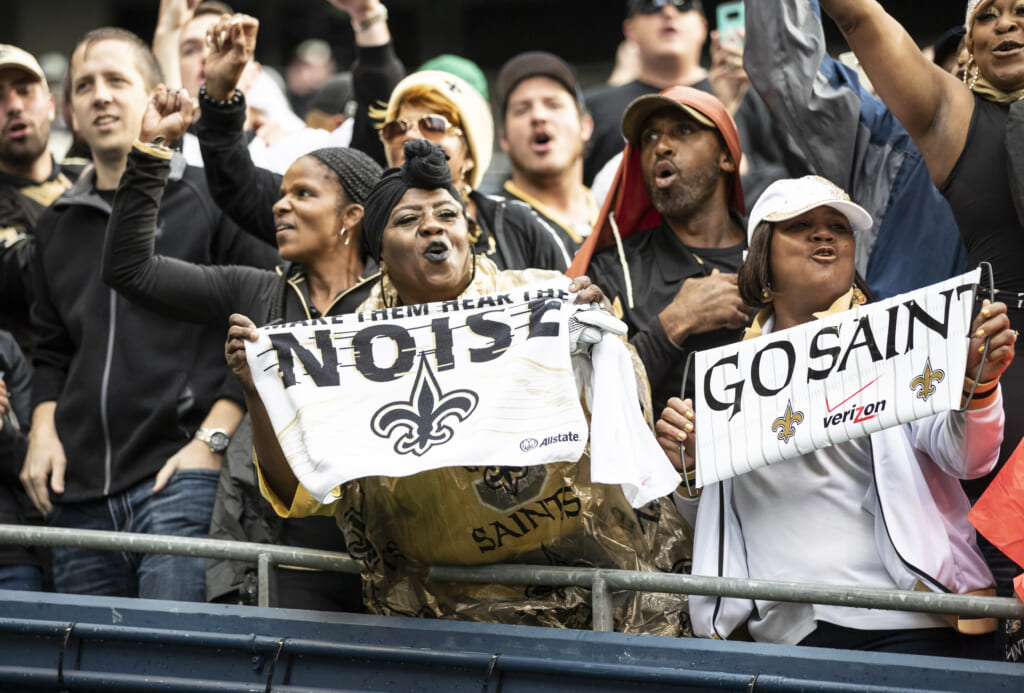 New Orleans Saints fans or the ‘Who Dat Nation’ celebrate after game against the Seattle Seahawks at CenturyLInk Field on September 22, 2019 in Seattle, Washington. The Saints won 33-27. (Photo by Stephen Brashear/Getty Images)

He added, “And is everything right with our country right now? No. It’s not. We still have a long way to go. But I think what you do by standing there and showing your respect to the flag with your hand over your heart is it shows unity. It shows that we are all in this together, we can all do better, and that we are all part of the solution.”

Highlight: @readdanwrite asks @drewbrees what the star NFL quarterback thinks about “players kneeling again when the NFL season starts.”@drewbrees: “I will never agree with anybody disrespecting the flag of the United States of America or our country.”

Brees may have forgotten that he is now a coworker of Malcolm Jenkins, who while with the Philadephia Eagles, formed the Player’s Coalition, a social justice group made up of NFL players. While the two had a falling out over execution, Jenkins was a vocal supporter of Kaepernick’s anthem protest and social justice while playing for the Eagles.

Brees, now 41, is coming to the end of his 14-year career with the Saints. He won Super Bowl XLIV with the team against the Indianapolis Colts in 2010 and was the Super Bowl MVP. He has been a popular figure among Saints fans who arguably have one of the more diverse fanbases in the league.

However, social media was quick to straighten out the future Hall of Famer including his teammate, the leagues’ top-ranked wide receiver Micheal Thomas, Aaron Rodgers, Lebron James, and other athletes.

A few years ago we were criticized for locking arms in solidarity before the game. It has NEVER been about an anthem or a flag. Not then. Not now. Listen with an open heart, let’s educate ourselves, and then turn word and thought into action. #wakeupamerica #itstimeforchange #loveoverfear❤️ #solidarity #libertyandjusticeforall #all

We don’t care if you don’t agree and whoever else how about that.

He don’t know no better.

WOW MAN!! ??‍♂️. Is it still surprising at this point. Sure isn’t! You literally still don’t understand why Kap was kneeling on one knee?? Has absolute nothing to do with the disrespect of ?? and our soldiers(men and women) who keep our land free. My father-in-law was one of those https://t.co/pvUWPmh4s8

Others pointed out that Brees has kneeled before and came with the photo receipts:

Saints running back Alvin Kamara commented as well, though he didn’t explicitly say it was about Brees, we’ll read between the lines:

Even Saints fans and veterans came for Brees for his comments.

First, I’m one of the BIGGEST Saints fan and I go hard for the team but I was VERY disappointed in your statement!

Second, I’m an Army Veteran who served this country so that Kaepernick and others could kneel!!

FOR THE LAST TIME!! Kneeling has nothing to do with the DAMN flag!!

Should be some interesting conversations in the Saints locker room this fall…if the NFL season happens. The Saints lost Black quarterback Teddy Bridgewater, who won five straight games while Brees was injured last season to the Caroliina Panthers. They are putting their fortunes at QB in the hands of Taysom Hill, a multi-position player with many fewer pro snaps at QB.