The coronavirus pandemic has brought both health and economic devastation to the world. Because of that, it has forced state and city governments to make difficult choices about budgets and funding.

Cities and states were previously improving their bottom lines with a wealth of commercial, retail, and residential development, the popularity of restaurants and live music venues, among other attractions. Now they are faced with a loss of taxes, consumer spending, and the fallout from closed retail businesses.

As it often goes, budget cuts come at the expense of the most vulnerable populations. In cities like Philadelphia, summer job employment programs, cultural organizations, and public school services are being cut.

But according to Fastcompany, budgets that are remaining intact are for the police.

For example, New York City mayor Bill de Blasio has proposed a new budget for the 2021 fiscal year that includes just a 0.39% reduction in the NYPD’s $6 billion dollar annual budget. Yet the city’s Department of Education will see a budget cut of $827 million, which represents 3% of its annual budget. The  Department of Youth and Community Development, which oversees services including summer youth programs, would lose a whopping 32% of their budget.

In Los Angeles, which was hit hard by the coronavirus, the proposed city budget includes a $123 million dollar increase, some of which will include bonuses for police officers with college degrees and pay increases, Fastcompany reports. This is despite many other city workers who are facing pay cuts. 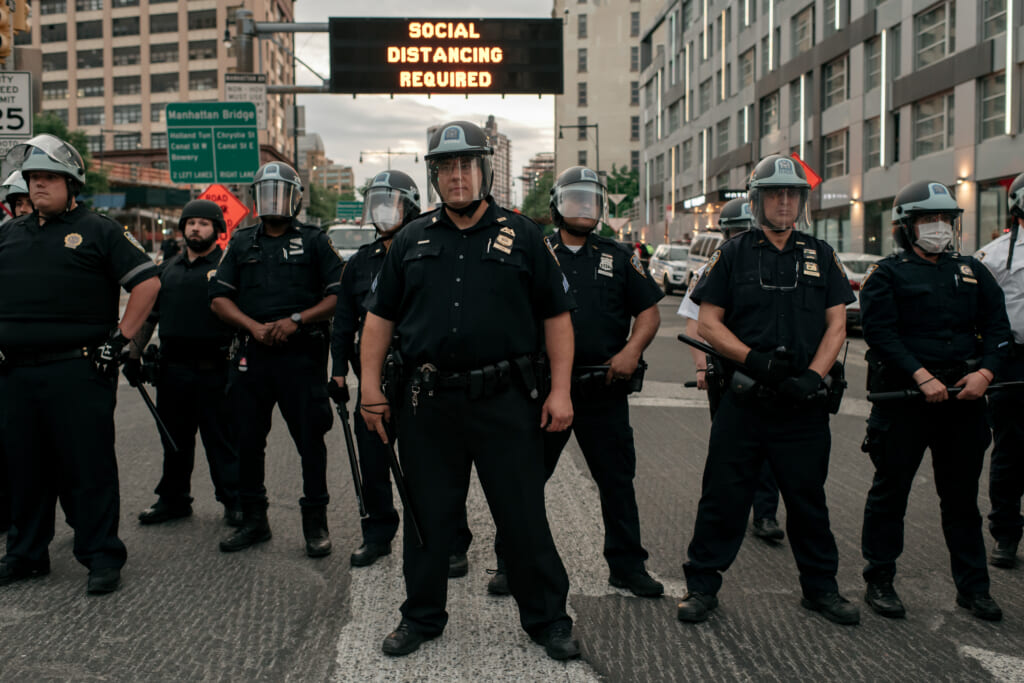 NYPD officers block the entrance of the Manhattan Bridge as hundreds protesting police brutality and systemic racism attempt to cross into the borough of Manhattan from Brooklyn after a citywide curfew went into effect in New York City. (Photo by Scott Heins/Getty Images)

In Minneapolis, where George Floyd was killed during an arrest, a budget passed last December allows for the hiring of up to 30 new police officers in a total budget of $193 million. That is 60% higher than the $119 million that has been allotted for the city’s Community Planning and Economic Development Department, which helps low-income residents find housing and jobs, among other services.

This kind of budgeting is reflected in other major cities, which policymakers and community organizations say don’t necessarily make those cities any safer.

“Study after study shows that a living wage, access to holistic health services and treatment, educational opportunity, and stable housing are far more successful in reducing crime than police or prisons,” says a 2017 report from the Center for Popular Democracy. an organization that links policymakers with grassroots organizations.