Det. Joshua Jaynes has been taken off active duty as the FBI investigates the case.

The Louisville detective who sought a ‘no-knock’ warrant for Breonna Taylor‘s home which resulted in her death has been placed on administrative reassignment.

The Courier-Journal reported Wednesday that interim Louisville Metro Police Chief Robert Schroeder announced that he placed Detective Joshua Jaynes on leave until further notice. Schroeder stated that questions needed to be answered from Taylor’s family, attorneys, and other authorities in regard to “how and why the search warrant was approved.”

Schroeder added the matter has been referred to the FBI, who have started their own inquiry into the death of the 26-year-old EMT. Taylor was shot and killed on March 13 when Louisville police officers entered her home unannounced to serve a no-knock warrant in connection with a narcotics investigation.

Taylor’s boyfriend, Kenneth Walker, said that he thought someone was breaking in and fired off a shot. The officers returned fire, shooting Taylor eight times. She died at the scene and there have so far been no arrests in her death.

Court records showed that Jaynes had requested a judge’s permission for five no-knock searches in relation to a narcotics investigation in March “due to the nature of how these drug traffickers operate.” Jefferson Circuit Judge Mary Shaw signed all of them within minutes.

Jamarcus Glover and Adrian Walker were named in all the warrants. Taylor only appeared in the one for her apartment. It was because Jaynes said Glover had gotten a package from Taylor’s home in January and drove to a “known drug house.”

The detective further wrote that he “verified through a U.S. postal inspector that Jamarcus Glover has been receiving packages” at Taylor’s apartment. 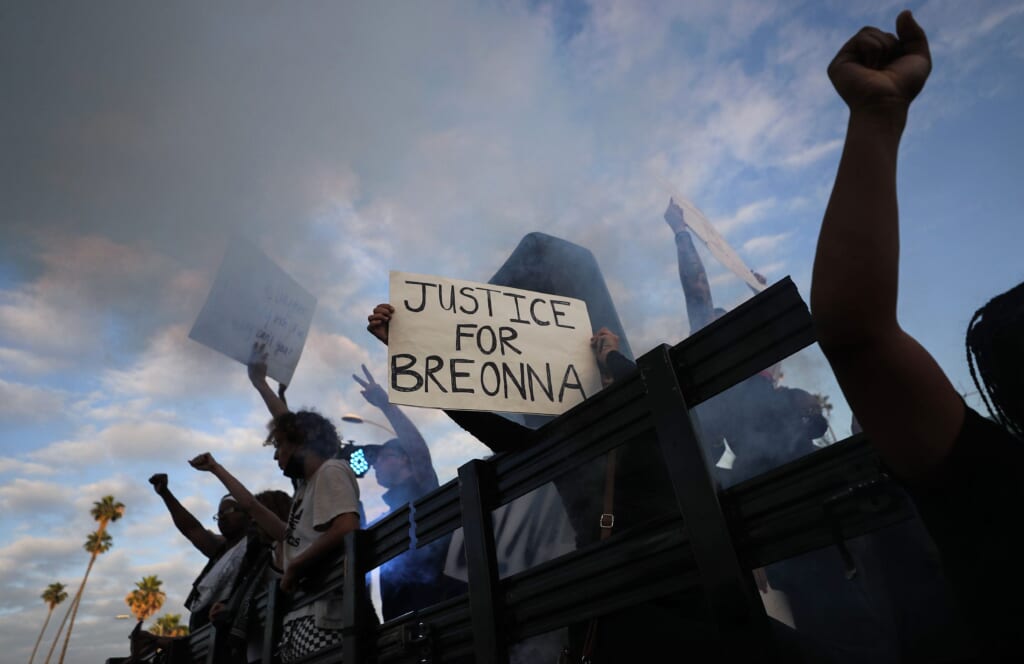 Protesters ride aboard a vehicle with a smoke machine, with a sign reading ‘Justice for Breonna’, during a peaceful demonstration against racism and police brutality on Hollywood Boulevard on June 06, 2020 in Los Angeles, California. (Photo by Mario Tama/Getty Images)

“It is not uncommon for drug traffickers to receive mail packages at different locations to avoid detection from law enforcement,” Jaynes wrote. ” … Mr. J. Glover may be keeping narcotics and/or proceeds from the sale of narcotics” at Taylor’s apartment “for safekeeping.”

When the warrant was executed at Taylor’s home, Glover was already in custody.

However, U.S. postal inspector Tony Gooden of Louisville pushed back against the assertion that Taylor’s home was a drug den. He told WDRB News that his agency looked into whether Taylor’s home was being used in an illegal manner and it proved that it wasn’t the case.

“There are no packages of interest going there,” Gooden told the news outlet.

Benjamin Crump, the noted civil rights attorney who is defending Taylor’s family, said Gooden’s words showed there was no justification to issue a no-knock warrant on her home. In a statement, the attorney declared that Gooden’s comments “directly contradicts what the police stated in the affidavit to secure a no-knock warrant for her home.”