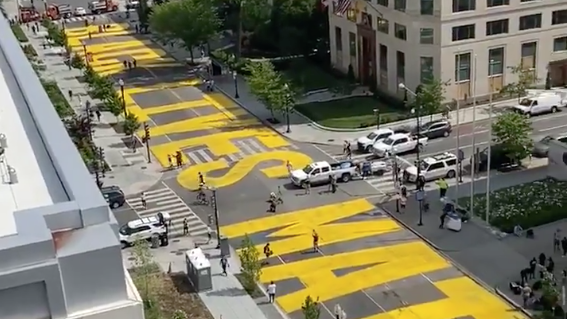 Three white men have sued Washington, D.C. Mayor Muriel Bowser for a Black Lives Matter mural painted on the street leading to the White House, according to a report from The Washington Times.

The group, among them a former military legal advisor, believe that the mural show favoritism over one race.

The suit also criticizes the mayor for renaming the street outside Lafayette Square “Black Lives Matter Plaza,” claiming that it’s a “legal weapon against non-observers of the Black Lives Matter religion” and seeks recompense for “mental anguish and emotional distress,” The Daily Mail reports.

Bowser originally commissioned artists to paint the Black Lives Matter mural on 16th Street as a sign of solidarity amid nationwide protests against the death of George Floyd, who died at the hands of Minneapolis police while unarmed on May 25. She also renamed a street at Lafayette Park “Black Lives Matter Plaza.”

In regards to the street sign, the three plaintiffs also suggest ‘Black Lives Matter Plaza’ be renamed, offering “Jesus is the Answer Plaza” as an alternative, according to the British outlet.

The nation’s capital has been one of the focal points of civil unrest across the country. President Donald Trump came under fierce criticism earlier this month after he ordered police tear gas and remove protesters from nearby the White House so that he could walk over to St. John’s Episcopal Church for a photo op.