Kyle Weatherman joined the competition with a car featuring the hashtag 'back the blue' in support of law enforcement and first responders. 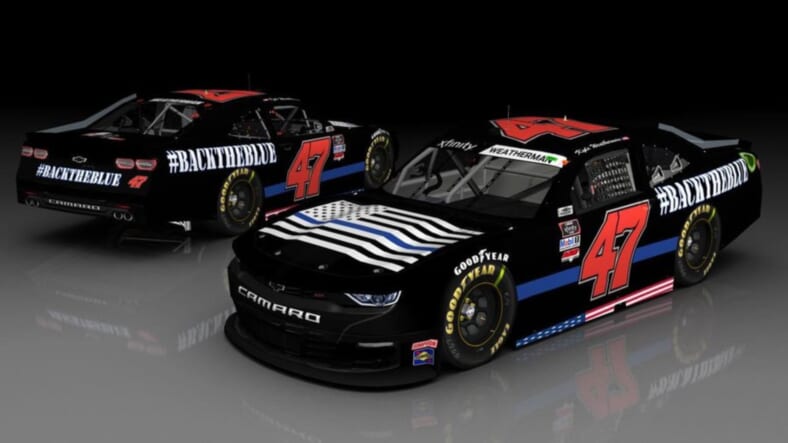 In response to NASCAR’s historic ban of the Confederate flag and the reveal of a Black Lives Matter themed car, one competitor has pushed back by debuting a “Blue Lives Matter” themed vehicle.

According to KRON4, Sunday, during the Dixie Vodka 400 in Homestead, Florida, driver Kyle Weatherman joined the competition with a car featuring the hashtag “back the blue” in support of law enforcement and first responders.

The hood of the Camaro also featured the thin blue line flag, an emblem of the Blue Lives Matter organization which was created not just to support police but to serve as a counter-movement to Black Lives Matter’s fight against police brutality and systemic racism.

Weatherman’s team claimed he was inspired by the families of officers killed in the line of duty. However, many have pointed out the suspicious timing of him showing up with the new design just days after NASCAR’s only African American driver, Bubba Wallace, raced his number 43 car with a “Black Lives Matter” design.

Mike Harmon Racing supports our LEO’s and First Responders, we THANK YOU for your service, sacrifice and dedication‼️
??? pic.twitter.com/RTddq7NY20

Weatherman denied any malice behind his selection of slogan on social media.

“Thanks David. I absolutely I support the black men and women of this country and also support all first responders also. LOVE EVERYONE,” he tweeted in response to a fan.

Thanks David. I absolutely I support the black men and women of this country and also support all first responders also. LOVE EVERYONE ?? https://t.co/SIGrkTaIzC

Despite pushback from drivers who miss the days when confederate flags were a common decoration at these races, NASCAR’s efforts to rebrand itself creates a safe space for Black people in a mostly white racing industry.

As we previously reported, this week the company appointed industry veteran Brandon Thompson to be its vice president, Diversity and Inclusion in a newly created position.

“NASCAR has made significant progress in the areas of diversity and inclusion and we now have an opportunity to build on our momentum – both as a company and industry,” said Thompson following Tuesday’s announcement. “It is with great passion and energy that we will champion our sport as accepting and welcoming of all individuals interested in being part of the NASCAR family.”