If convicted, Nichole Anderson and David Nelson face up to a year in jail over their act of vandalism caught on camera.. 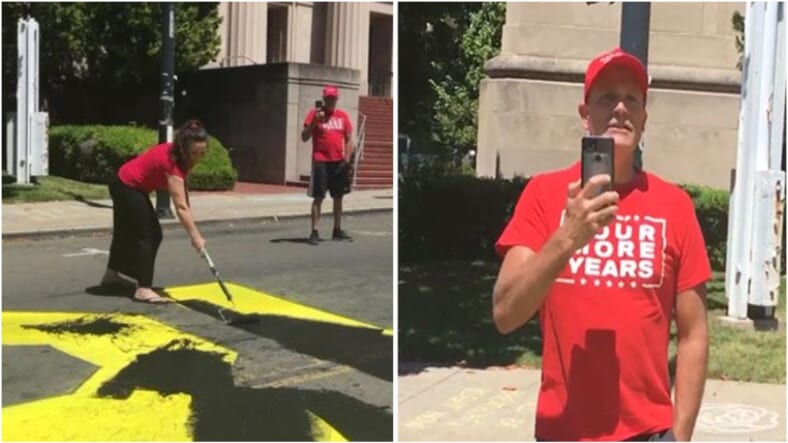 The Bay Area white couple who were captured on camera painting over a Black Lives Matter street mural have been charged with a hate crime.

Nichole Anderson and David Nelson were slapped with misdemeanor counts on Tuesday for their July 4 antics, TMZ reports. Viral video shows the couple sparring with activists as Anderson covers up a yellow ‘BLM’ mural with black paint.

In the video, the couple proclaim “all lives matter” and that getting killed by the police is a consequence of disobedience, theGRIO previously reported.

The mural was authorized to be painted at the Martinez, California courthouse, but the couple wasn’t having it. They attempted to erase the tribute with black paint.

“No one wants Black Lives Matter over here, get the fuck outta here,” Nelson said. “All lives matter, you fuckin’ punk. The only reason why you are crying that white people practice police brutality, [is because] people were resisting arrest.”

“Don’t have a run in with the law and don’t resist arrest, and there won’t be a problem,” he continued.

Anderson and Nelson are charged with three misdemeanor counts, including a hate crime, violation of civil rights, vandalism under $400 and possession of tools to commit vandalism or graffiti, per CBS News.

“We must address the root and byproduct of systemic racism in our country. The Black Lives Matter movement is an important civil rights cause that deserves all of our attention,” Contra Costa County District Attorney Diana Becton said in a press release.

“The mural completed last weekend was a peaceful and powerful way to communicate the importance of Black lives in Contra Costa County and the country. We must continue to elevate discussions and actually listen to one another in an effort to heal our community and country,” Becton added.

If convicted, the couple face up to a year in county jail.