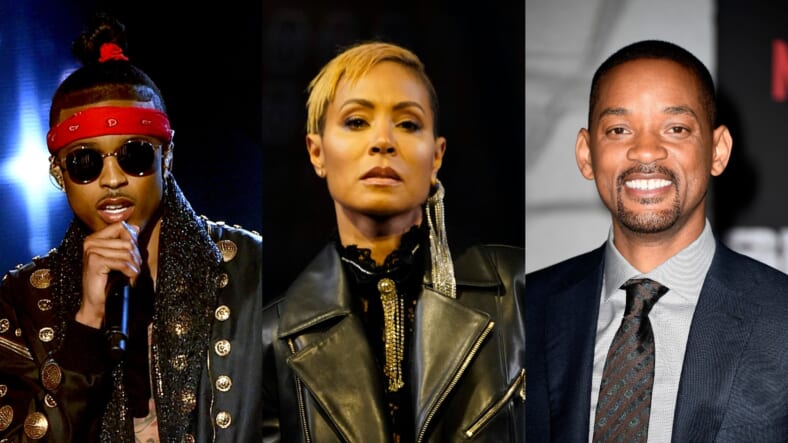 Jada Pinkett Smith and her husband Will Smith appeared on the much-anticipated latest episode of Red Table Talk to discuss their “private business” with R&B singer August Alsina. The couple gave a hat tip to Black Twitter who made them want to be transparent.

The “Jada brings herself to the table” episode was uploaded to Facebook on Friday afternoon and it opened with the Smith’s sitting at the Red Table. At one point, Will joked that he felt like the husband at the “press conference” as they discussed her “transgression” with Alsina.

Last week, Alsina broke the internet by claiming he had an affair with her and that Will gave them his blessing.

“At the end of the day, I don’t like how all of this came to be. That doesn’t matter, it’s all love, honestly,” Jada said. “That would be something I wouldn’t comment on at all. I feel like it’s a situation I consider private.”

“But now Black Twitter has claimed it as they business,” said Will with a laugh.

The Smith’s also acknowledged that they broke up and separated for a period of time four years ago. It was during this period in 2015 that she got into an “entanglement” with the R&B singer.

“I was done with you,” Will laughed.

Pinkett-Smith claimed that her relationship with Alsina started with her wanting to help him through various mental and physical health struggles. The Smith’s were concerned about him and tried to “help pull him through.” It then blossomed into more.

“From there, as time went on, I got into a different kind of entanglement with August,” Jada said.

The actress denied the claim that Will gave Alsina permission to have a relationship with his wife of over 20 years and mother of two of his children. She shot that down right away.

“The only person who could give permission in that particular circumstance is myself,” Jada declared.

She insisted the singer only wanted to let folks know that he wasn’t breaking up any marriages, much less a happy one.

“What August was trying to communicate … I think he wanted to make it clear he’s not a home wrecker,” she added.

Will asked her to explain what “clearly what happened” with her and Alsina.

“I got into an entanglement with August,” she said. “A relationship, it was a relationship, absolutely. I was in a lot of pain, I was broken and in the process of that relationship, I definitely realized that you can’t find happiness outside of yourself. And luckily enough, you and I were also going through a process of healing in a much different manner.”

Jada said she was seeking the happiness that had been missing from her life.

“I just wanted to feel good. It had been so long since I had felt good and it was really a joy to help heal someone,” Jada said.

Jada shared that she broke off her “entanglement” with Alsina and hasn’t had communication with him since. (She apparently overlooked that he appeared on the addiction episode of Red Table Talk in 2018 to discuss his issues with substance abuse.)

“I let that be and hadn’t talked to him since,” said Jada, “so it is a little weird all this stuff is coming out now since this was several [years ago].”

The Smith’s were in agreement that their union was now stronger than ever.

“We have really got to that new place of unconditional love,” said Jada, as Will shared he wasn’t sure they would ever speak again after their separation. “It ain’t for the weak at heart,” he added, “there are just certain things we have to go through.”

“You gotta go through some shit to get the answers,” said Jada. “I definitely believe you and I, we never thought we would make it back.”

The episode ended with the duo declaring that they were in it for the long haul.

“We ride together, we die together, bad marriage for life,” Jada said as the two chuckled, then gave each other a high five.